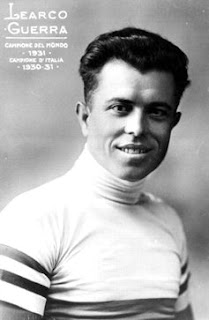 Born in Bagnolo san Vito on the 14th of October 1902, Guerra's football ambitions meant that he came to cycling unusually late when he was 26. It took him just a year to become National Champion in 1930, the same year he entered the Giro d'Italia for the first time and won two stages (8 and 11), coming 9th overall. Even more remarkably, he also entered the Tour de France for the first time, where he won three stages (2, 13 and 15), wore the maillot jaune for seven days and finished in 2nd place overall and retained his National title. He kept it again in 1931 and added the World Road Race Championship for good measure, having won another four stages in the Giro too. He wasn't World Champion in 1932 but remained National Champion, this time winning six Giro stages (1, 4, 6, 8, 9 and 13). In 1933, he took Stages 1, 3 and 5 at the Giro, then went back to the Tour where he won Stages 2, 6, 7 and 18, once again finishing 2nd overall, won Milan-San Remo and became National Champion for the fourth consecutive year. 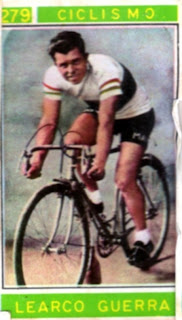 Sadly, Guerra's enormous success was hijacked by the Italian Fascist government who used him as a heroic figurehead in propaganda. His own politics are not known, but most historians feel he was probably not a fascist himself - his popularity in the peloton, among cyclists of various nations and at a time when many were beginning to develop real suspicions and fear of what was taking place in Italy and Germany, may confirm this; as would his work after retiring as a cyclist when he became a team manager for, among several others, Charly Gaul, a rider who would have made one of the most unlikely fascists ever.

He died aged 60, having been diagnosed Parkinson's Disease some time previously.

Franco Ballerini
Franco Ballerini, who died on this day in 2010, first found fame as a cyclist before becoming a cycling team manager. Born in Florence, his greatest success came in the Classics - he won Paris-Roubaix, the single-day race so hard it's known as commonly by its nicknames "The Hell Of The North" and "A Sunday In Hell" as often as by its real name, on two occasions, first in 1995 and then again in 1998. He also won Paris-Brussels in 1990, the Giro della Romagna in 1991, the Omloop Het Nieuwsblad in 1995 and the Grand Prix de Wallonie in 1996.

Ballerini loved rally racing as much as he loved cycling, and it was while participating in that sport that he met his untimely end when he was 45. He was acting as navigator for a driver named Alessandro Ciardi during a race at Larciano when the car went out of control and crashed, leaving him with the horrific injuries that caused his death a short while later.

Elia Viviani
Born in Isola della Scala, Italy on this day in 1989, Elia Viviani began to compete in cycling races both on road and track at the age of eight; for five years, he also played football and didn't decide to concentrate on cycling until he was thirteen. He first came to attention by winning the Juniors Criterium and Novices Road Race events at the European Youth Olympics in 2005, also coming second in the Novices National Road Race Championship that year. The following season he became European Junior Scratch Champion and was third in the Madison at the World Junior Championships, then in 2007 he won the Points race at the European Junior Championships and rode with the winning team in the Pursuit and Sprint events at the Junior Nationals. 2008 was his first year racing as in the Under-23 category; he won the U-23 European Scratch and Madison (with Tomas Alberio) Championship.

Viviani turned professional with Liquigas-Doimo in 2010, having proved himself an able sprinter on the road, and won stages at the Vuelta a Cuba and Tour of Turkey before taking victory at the Marco Pantani Memorial; then in his second professional season he performed well at the Tour Down Under, won the Omnium at the Manchester round of the World Track Cup,  won a stage at the Tour of Slovenia, two stages at the USA ProCycling Challenge, became U-23 European Points Champion and National Elite Madison Champion (with Davide Cimolai), then won a stage at the Tour of Beijing.

His first General Classification victory came in 2012 at the Giro della Provincia Di Reggio Calabria and he twice finished stages in second place at the Tour of Poland, performances that persuaded Liquigas managers to give him a place at his first Grand Tour, the Vuelta a Espana: he did very well indeed with fourth place on Stage 2, fifth place on Stage 5 and second place on Stages 7 and 21 - however, his finishes on the mountain stages were far lower and he ended the race in 128th place overall. Towards the end of the season he won another stage at the Tour of Beijing and came third in the overall Points competition, then returned to the track to become European Elite Points race Champion. He continued to race for the same team - renamed Cannondale, with the US-based manufacturer becoming main sponsor - in 2013 and won the Tour of Elk Grove, Stage 2 at the Critérium du Dauphiné and Stage 1 at the Tour of Britain in addition to enjoying a very successful year on the track where he won the Points race and the Madison at the European Championships.


Belgian Wim Arras, born today in 1964, was considered destined for great things after winning Paris-Brussels in 1987, also achieving podium finishes and stage wins in numerous other events. However, his career was cut short by a motorcycle accident in 1996.

The Devil
Today is also the birthday of Didi Senft, the legendary Tour de France Devil. Born at Reichenwalde in Germany in 1952, Didi began to earn his strange sort of fame in 1993, when he went to watch the Tour and decided to dress as the Devil - he says he was inspired to adopt the costume by a German cycling commentator, Herbert Watterot, who always called the final lap of a criterium race the "Red Devil's Lap." His costume may have been eye-catching, but standing in the crowd could never have been enough for Didi - soon, he began to run alongside the race, waving his pitchfork and getting noticed by the TV cameras. Fans, in general, loved it; riders were in many cases less impressed, some would throw their bidons at him.

However, in 1994 he was back, with a new and improved costume, and fans who recognised him from the previous year welcomed him back. He has been at every Tour since (except for 2012, when he underwent brain surgery; he returned in 2013 with a yellow costume to celebrate the Tour's 100th edition) and has become a fixture - some people watch the Tour not for the racing, but to look out for the Devil.

Britain's First Cycle Lane
On this day in 1934, the Queensland Times newpaper in Australia printed a short article on the opening of a new road in London. What was notable about the new road? Running alongside it for two-and-a-half miles was an innovation borrowed from Continental Europe - a segregated cycle lane, the first in Britain. Wide enough for two riders to pass in opposite directions, the lane cost £7000 to design and construct.

Cyclists in Britain had previously been opposed to cycle lanes, believing that they would become mandatory and thus cost cyclists their right to use the highway; however, more than 1,300 riders had been killed on the roads in the previous year, prompting Minister of Transport Leslie Hore-Belisha (he of the Belisha beacons, which can still be seen at zebra crossings in Britain to this day) to write "The challenge presented by the figures of cyclists killed and injured is so formidable that I would be guilty of dereliction of duty if I did not do something to try and protect them."

A little after the cycle lane was opened, surveyors spoke to cyclists using it and found that 80% of them were now in favour; within four years there were 120 miles of cycle lane in the country.