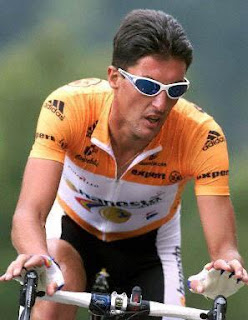 Jose María Jimenez Sastre
At the start of his professional career, Jose María Jimenez was widely hailed as a likely successor to none other than Miguel Indurain in Spain, where he was born in El Barraco on this day in 1971. Indurain, Spain's most successful cyclist, had become the fourth man to win five Tours de France and the first to do so consecutively, so it was not a comparison that was made lightly.

His Grand Tour performance was impressive; finishing the 1996 Vuelta a Espana in 12th place overall, then finishing the following year's Tour de France in 8th place and winning the Vuelta's Mountains Classification and a stage. The following year he got his first Vuelta podium finish when he came 3rd overall, also winning four stages and the Mountains for a second time. Then, in 2001, he only came 17th overall but won three stages, the Mountains and the Points Classification - a rare feat since the Points are almost invariably won by sprinters, and climbers do not make good sprinters any more than sprinters make good climbers. Those who can climb and sprint are the rarest of the rare and almost guaranteed Grand Tour wins.

Sadly, it was not to be. Jimenez suffered from clinical depression - he received psychiatric treatment but, as is all to frequently the case, his illness took over his life and as a result he retired in 2002, the same year that he got married. In 2003, he died of a heart attack in a Madrid clinic, aged 32. His death - like that of the great Italian climber Marco Pantani, another rider to whom he had been compared - was caused by an overdose of cocaine.

Jiminez will always be remembered for his incredible victory in Stage 8 at the 1999 Vuelta a Espana, the first time the race had featured the Alto de l'Angliru which remains the steepest climb in any Grand Tour with gradients as high as 23%. Pavel Tonkov had been leading the stage and had a significant advantage when Jiminez launched an attack, thinking nothing of the consequences he might face from attacking on a mountain so steep and in atrocious weather with rain and fog (in 2002, the third time the mountain was used, it also rained. The combination of wet roads and sheer gradient left team cars and support vehicles unable to follow the bikes up). He'd become known for these apparently rash attacks which, as often as not, resulted in failure and exhaustion; but when they did work they tended to result in spectacular wins and glory, so he kept doing it.

This time, it worked. He caught Tonkov with a kilometre to go and the two men began to sprint through the final, flatter section. Many times when he'd done this, he'd hit the wall before the end and lost as much as ten minutes by the end. This time, despite the superhuman effort required to ride such a climb aggressively, he'd timed himself to perfection and crossed the line first. It's common to hear fans claiming that although cycling is still a fine sport, it no longer offers the spectacle that it once did. If reminded of that day in Spain, they usually change their minds.

Still racing today, Hormes-Ravenstijn took second place behind Nikki Harris at Niel on the 10th of November in 2012.

Ukrainian Volodymyr Bileka was born on this day in 1979 in Drohobych, was a rider with Discovery and later Silence-Lotto who showed promise in time trials and as a sprinter. His resignation, announced as being due to "personal reasons" on the 6th of May in 2008, therefore came a s a surprise - until it was revealed that he'd been handed a two-year ban after testing positive for EPO.


On this day in 2012, after a positive test for banned bronchodilator Clenbuterol at the 2010 Tour de France sparked an investigation and legal case that even by the standards of the UCI and CAS was long and drawn-out, Alberto Contador was declared guilty of doping. The Court decided that although it didn't believe the rider's explanation that the drug had been accidentally ingested in contaminated meat, it was unlikely that he had intentionally doped and that the drug had probably found its way into his body via a contaminated food supplement; however, due to a legal process known as "burden of proof," his inability to prove his explanation made him guilty in the eyes of the law and he was handed back-dated two-year ban before being stripped of his General Classification victories at the 2010 Tour, 2011 Giro d'Italia and numerous other races.