Paris-Nice began on this date in 1959 and 1990. The earlier year was a remarkable one in that it was the longest edition ever, at 1,955km - the reason for this being that it was run from Paris to Nice and then on to Rome. It was organised as a sort of three-in-one race with three General Classifications, the first from Paris to Nice, the second from Nice to Rome and the third covering the entire parcours. It seems that organisers thought this a splendid idea and had every intention of continuing to run it this way, but the riders were not at all impressed and declared the distance excessive in a six day race. The following year, the race stopped at Nice once more. The winner was Jean Graczyck.

Despite the name, Paris-Nice has started in Paris just four times since 1963 - in 1986, 1987 and 1989 and then again in 1990 before moving to Fontenay-sous-Bois. Paris-Nice's classification leadership jerseys have been altered numerous times during the history of the race, and in 1990 the King of the Mountains jersey - which had been blue since 1985 - changed to yellow and blue, the corporate colours of new sponsor Agrigel. It had been yellow and blue for one year in 1984 when it had been sponsored by Le Crédit Lyonnais. 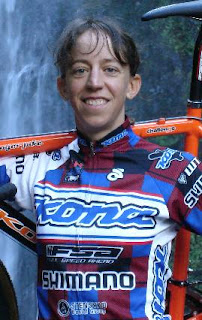 Having won a series of races both at home and abroad early on in her career, Wyman won the National Championship title in 2006, then won it again in 2007, 2008, 2009, 2010, 2011, 2012 and 2014; she was also European Champion in 2012 and 2013, and came third at the World Championships in 2014. While 'cross remains her speciality, she is also a talented road racer - in 2011 she was the overall winner of the Women's Tour Series, and in 2013 she won the Sheffield GP criterium. Along the way, she has either won or achieved a podium finish at almost of all the most prestigious races in Europe and the USA, including first place at the 2010 GVA Trophy Koppenberg - her first win in Belgium, cyclo cross' spiritual home, for six years despite a puncture.

Now riding for the Kona/FSA Factory team, Wyman is one of the most popular riders with the fans and can frequently be found chatting with them and answering their questions on Twitter. Her race reports, published on her website, are highly informative and often very funny.

Tinker Juarez
Born in California on the day in 1961, David "Tinker" Juarez has had one of the longest and most comprehensive careers of any cycling. He became a professional BMX rider in 1977, one of the first people to make a living from the sport and having already won the first ever BMX Grandnational Championship two years previously. He would become one of the most influential figures in the development of the fledgling Freestyle scene, inventing several of the tricks that are now considered classics, as well as the High Air style on both vert and dirt ramps - incredibly, he avoided the injuries that most BMX riders will suffer regularly and didn't break a single bone during a ten year career.

Around the middle of the 1980s, he became involved in the so-called Formula 1 cycle racing scene, a new discipline featuring rather peculiar bikes that looked a little like a road/mountain bike hybrid fitted with BMX-size 20" wheels (you can see one if you click here). F1 fizzled out almost as soon as it began, perhaps due to the bikes looking just a bit to ridiculous to be taken seriously, but Juarez was not ready to bow out just yet and took up mountain biking, winning the National Cross Country Championship three times, National Solo 24-Hour Champion fours times and laid claim to another "first" - he competed in the first Olympic mountain bike event. He still races mountain bikes to this day.

From 2005, he also began to compete in long-distance endurance road races and won the 800km single-stage Heart of the South event, later coming 2nd overall at the Furnace Creek 508, a 818km (508 miles) single-stage race that climbs 11,000m in total and passes through Death Valley where temperatures regularly approach 50°C (122°F). As a podium finisher, he automatically became eligible to enter the Race Across America, a 4,800km multi-day, single stage event that encourages entrants to ride for as long possible, without stopping, on roads open to traffic.

Juarez, now 51, is still racing to this day. In 2010, he won the UCI Mountain Bike Masters World Championship in Brazil.


A 12-year-old Steven Burke, who was born on this day in 1988 in Burnley, Great Britain, watched Jason Queally win a gold medal for the 1000m time trial at the 2000 Olympics and was inspired to take up track cycling himself. Eight years later, he stood next to his hero Bradley Wiggins on the podium at the Games in Beijing to receive a bronze medal for the individual pursuit race. To date, he had seven British Track Championship and five European Track Championship wins to his name.

Michael Andersson, born in Höganäs in Sweden on this day in 1967, is a multiple National Champion and is the only rider to have won the Postgirot Open (Tour of Sweden) three times. Unfortunately, it looks as though he'll be the remain the only rider to have done so because the race has not been held since 2002.

Italian Flavio Vanzella, born in Vazzola on this day in 1964, wore the yellow jersey for Stages 4 and 5 at the 1994 Tour de France. The following year he won a stage at the Tour de Suisse and overall at the Giro di Veneto.

Born in Antwerp on this day in 1906, Belgian rider Georges Ronsse is remembered by few now. Yet his career, which spanned 13 years between 1926 and 1938, included many very impressive victories - among them were Liège–Bastogne–Liège in 1925; Bordeaux-Paris and Paris-Roubaix in 1927; Paris-Brussels and a World Championship in 1928; another World Championship, Bordeaux-Paris and the National Cyclo Cross Championship in 1929; a third Bordeaux-Paris, a second National Cyclo Cross Championship and the GP Wolber in 1930; 5th place overall and Stage 4 at the 1932 Tour de France and three National Track Stayers Championships in 1933, 1934 and 1935 in addition to podium finishes at most of the big races of the time. He retired in 1938, after winning a silver medal at the National Track Stayers Championship.

Dave Rayner, twice winner of the Under-22 Category at the Milk Race (Tour of Britain) was born in Shipley, West Yorkshire, on this day in 1967. Dave died on the 16th of November 1994, one day after becoming involved in an incident outside a Bradford nightclub when he was just 27 years old. One year later, a memorial fund was created in his name to provide financial assistance to promising British riders, allowing them to compete in European races - the first rider to benefit was David Millar.

Australian cyclist Darren Lapthorne was born in Melbourne on this day in 1983. He achieved good results in his first years as a professional, then became National Champion in 2007. 2008 began well for him with a stage win at the Geelong Bay Classic Series, but tragedy struck later in the year when his sister Britt went missing from a nightclub in Croatia, a country she was visiting during a backpacking tour of Europe. Her body was discovered washed up on a beach less than a month later. The cause of her death has never been discovered, but there is some evidence that suggests her body was weighed down before it went into the sea. The rider returned to racing later, knowing that his sister would not have wanted him to give it up. "She was so proud of what I did and she was there at one of the last races in Germany that I did, she was my biggest fan," he said.

Aketza Peña, born in Zalla in the Basque Country on this day in 1981, was a rider with Euskaltel-Euskadi between 2004 and 2007 when he was disqualified from the Giro d'Italia after it was revealed that he had tested positive for the banned anabolic steroid 19-nortestosterone during the Giro del Trentino earlier in the year. In 2010, he joined the Caja Rural team.

Clarence Kingsbury, a successful British track rider in the early 20th Century, died on this day in 1949 at the age of 66. He competed in the 1908 Olympics and won two gold medals for the 20km and Team Pursuit competitions.

Edouard Klabiński died on this day in 1997, aged 76. In 1947 he won the Critérium du Dauphiné and became the first Polish rider to compete in the Tour de France, where he came 34th overall, then won a series of criterium races. He entered the Tour for a second time in 1948 and came 18th overall, finishing Stages 17 and 20a in second place. In the same year, he won the Grand Prix de Saint-Quentin.