Jurgen van den Broeck
Jurgen van den Broeck was born on this day 1983 in Herentals, Belgium (once the home of Rik van Looy). Van den Broeck first made his mark as a time trial rider, a discipline within which he still excels, becoming World Junior Champion in 2001. Within a year, he had also displayed a talent for the Classics, winning 1st place overall at the Tour of Limburg. In 2003, he took a silver medal at the National Time Trial Championships, then finished in the top ten at the Tour of Belgium in 2004 and Eneco Tour in 2005 before winning bronze at the National Time Trials in 2007.

Then, in 2008, he was a surprise 7th overall at the Giro d'Italia. He came 15th in the Tour de France in 2009 and won the Herentals Criterium. In 2010, he came 4th overall at the challenging Critérium du Dauphiné, a race that has frequently revealed riders destined for future Tour de France greatness - which was confirmed when he finished the Tour in 5th place overall the same year. He won Stage 1 and came 4th overall in the 2011 Dauphiné and was expected to perform well in the Tour, but was forced to abandon after a crash during a fast descent on Stage 9 which left him with a fractured shoulder and ribs and pneumothorax, but had recovered in time for the Vuelta a Espana where he was eighth overall. Good results - including fifth overall at the Critérium du Dauphiné - early in 2012 left van den Broeck looking to be on a good course for success at the Tour de France and he seemed a likely contender for victory in Stage 7 until more misfortune in the shape of a puncture on the final climb to the summit of Plateau de Beille saw him lose 1'54" to eventual stage winner Chris Froome of Team Sky. Nevertheless, his performance throughout the race was good enough to put him into fourth place behind Bradley Wiggins (Sky), Froome and Vincenzo Nibali (Liquigas-Cannondale) in the overall General Classification.

A good season seemed to be on the cards in 2013 when van den Broeck picked up some good results at the Tour de San Luis, where he was fifth overall, and even better ones at the Vuelta a Andalucia where he was second. Seventh place in the Tour de Romandie suggested a successful Tour de France, but once again he was prevented from finishing by injury following a crash during the fifth stage. The injury forced him to sit out the remainder of the season and he underwent surgery. He remained with Lotto-Belisol for 2014 and made his return at the Tour de San Luis.

Roberto Heras
Roberto Heras Hernández, born in Béjar, Spain on this day in 1974, is one of only two men to be officially listed as having won the Vuelta a Espana three times (the other being Tony Rominger) - in fact, he won it a record four times but tested positive for EPO in Stage 20, 2005, leading to his fourth victory being disqualified. He appealed the decision at the court of Castilla y León and was successful; however, the UCI, Spanish Cycling Federation and Court for Arbitration in Sport were uncertain that decision was valid, there being doubts over the court's competency to decide the case. Heras decided to contest with a civil action rather than through the CAS and, on the 21st of December 2012, the Spanish Supreme Court found in Heras' favour, allowing him to once again claim to be the most successful Vuelta rider of all time.

Heras turned professional with Kelme in 1995 and immediately began to show promise as a climber, developing his skills sufficiently that in 2000 he was offered a contract to ride with US Postal. He took it and soon became known as Lance Armstrong's right-hand man in the mountains, playing an important part in the helping the Texan towards his record-breaking seven Tour de France wins. 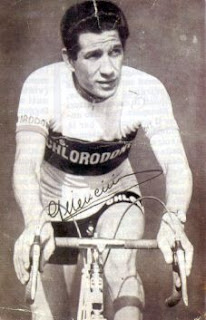 Gastone Nencini
Gastone Nencini (nicknamed "The Lion of Mugello" after his birthplace, Barberino del Mugello in Tuscany), died on this day in 1980, precisely one month before his 50th birthday. He was an example of that rarest of cycling breeds, an ace climber (he won the King of the Mountains at the Giro d'Italia and the Tour de France in 1957) who could also descend at high speed - most climbers, due to their typically skeletal figures, lack the physical mass to keep a bike under control while riding fast down a hill. Nencini, like the greatest climber of them all Charly Gaul, was fearless, however: according to French National Champion and multiple Tour stage winner Raphaël Géminiani, "the only reason to follow Nencini downhill would be if you had a death wish." Roger Rivière, a fast descender and several times a Tour stage winner himself, ignored that advice in 1960 when he tried to follow the Italian down from the Col de Perjuret - shortly after beginning the descent, he hit a low wall, plunged over the side and broke his spine; spending the rest of his life in a wheelchair. Even more unusually for a rider who could climb like he did, Nencini was a chain smoker.

In 1957, the year he won his two King of the Mountains competitions, he also won the Giro outright, beating 2nd place Louison Bobet by 19" and 3rd place Ercole Baldini by almost six minutes. His Tour win came in 1960, when he also finished the Giro in 2nd place overall, beating Graziano Battistini by more than five minutes.

Nencini was once challenged to a downhill race by Henry Anglade, who came second behind Federico Bahamontes (another contender for greatest climber of all time) at the 1959 Tour de France. The race, which was entirely unofficial, took place in the Dolomites during a Giro d'Italia, but the date and stage have not been recorded. The judge was the ardoisier (the blackboard man, to English-speakers), the loser was to buy the apéritifs after the stage and either Anglade was a very good descender indeed or he caught Nencini on a bad day.

"The road was of compressed earth," Anglade later told Coup de Pédales. "We attacked the drop flat out. I let Nencini take the lead so that I could see how he negotiated the bends before attacking him. In the end I dropped as though I was alone. At the bottom, I had taken 32 seconds out of him, written on the blackboard. I was really tickled. I had beaten Nencini. The next time I saw him was that evening in the hotel I was staying at. He had just bought me an apéritif!"


French rider Philippe Casado was born in this day in 1964 on Oujda, Morocco. Though never counted among the top riders of his day, he enjoyed considerable success during his career including one stage win and four podium finishes in the Tour of Britain in addition to numerous podium finishes in other races. He died on the 21st of January in 1995, when he was still only 30 years old. Twelve years after his death, Greg Lemond - for many years a very vocal opponent of doping and supporter of methods designed to stamp out the problem - recounted a tale of a rider with whom he had been close friends. He wouldn't give a name but said that his friend's drugs-related death was the reason he decided to retire. The description of the rider and his palmares left few people in any doubt whatsoever that he was referring to Casado.