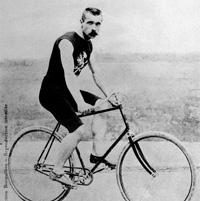 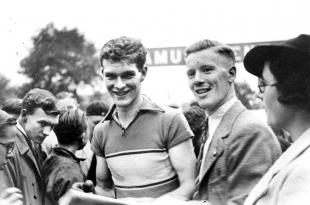 Once back in Britain after the race, he faced the same problem - but this time it was worse. On the way there he'd had just enough money to buy food and had carefully saved enough to do the same on the way there, but whilst in Germany temptation had got the better of him and he'd spent it all on a souvenir jacket. There was no alternative: he'd have to ride the rest of the journey without eating. He couldn't, of course, and "only" managed 170 miles before he cracked and had to thumb a lift.


Annett Neumann, born in Lauchhammer, Germany on this day in 1970, won a silver medal for the Elite Sprint at the World Track Championships in 1991 and another in the same event at the 1992 Olympics, then two more for the Sprint and the 500m at the World Championships of 1996.

Wilfried Wesemael, winner of the General Classification at the 1979 Tour de Suisse, was born on this day in 1950 in Aalst, Belgium.

Lisa Mathison, born in Brisbane on this day in 1985, was Junior Cross Country Mountain Bike Champion in 2001 and 2002, then Elite Champion in 2003 and 2004 and Under-23 Champion in 2006. In 2013, following several years out of the public eye, she was third at the National Downhill MTB Championships.