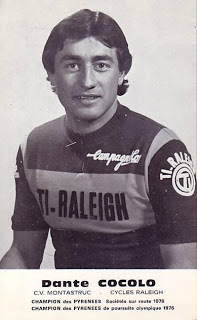 The name Dante Coccolo is all but forgotten today, but what he did and what happened as a result in the 1978 Tour de France is the stuff of legend.

The Tour, being the greatest race on the cycling calendar and having been in existence for more than a century, has given rise to numerous traditions and unspoken rules, some shared with other races and some unique to this one. Riders who ignore them do so at their peril, as Coccolo - who was born in Toulouse on this day in 1957 - discovered when he decided that he'd grab the opportunity to attack when the peloton took what cyclists like to term a nature break. This was not the first time he had done such a thing and the peloton was not best pleased.

Later on in the same stage, Coccolo needed to take a comfort break of his own. While he was thus engaged in the roadside bushes, two riders whose names have since been forgotten (probably immediately - and deliberately, so they wouldn't be penalised by judges) sneaked up and wheeled his bike away with them before throwing it in a ditch a couple of kilometres up the road. Coccolo was forced to wait five minutes for a Jobo-Spidel team car to collect him, but by this time his managers Yves Gobert and Guy Faubert had heard what had happened. They too were not pleased with how their rider had behaved. Deciding that he hadn't been punished enough, they made him sit on the car's bonnet as they drove him to his bike. He finished the race second to last overall and left the team soon afterwards, never riding in the Tour again. (For another fun tale of Tour misadventure, check back here tomorrow!) 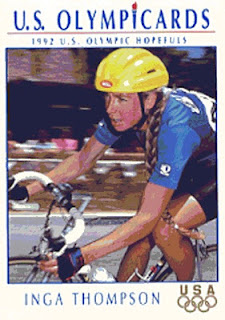 Born on Reno, Nevada on this day in 1964, Inga Thompson didn't start racing professionally until she was 20 in 1984 - only months later she came third overall in the Women's Challenge and took part in the Road Race at the Olympic Games, where she came 21st. The following year she was second at the Women's Challenge, then in 1986 she was third overall at the Tour de France Féminin and second at the Tour of Norway. In 1988 she was second in the road race at the PanAmerican Games and in the 50km TT at the World Championships, then won the Women's Challenge later in the season; in 1989 she was third again at the Tour de France Féminin.


Hugh Porter
Born in Wolverhampton on this day in 1940, Hugh Porter was often taken to see races during his childhood by his father, who was a keen club cyclist and encouraged his son to take up racing himself. Aged 16 and riding for the Wolverhampton Wheelers, he took third place in his first race. In his first year as a senior, 1958, Porter won enough races to be awarded a Category 1 licence the following year and went on to enjoy considerable success in road races at home and in Europe.

However, although road racing remained his first love and he intended, initially at least, to concentrate on it, it was on the track that Porter found his greatest glory - in 1963 he became Amateur National Pursuit Champion, a title he would win again in 1964 and 1965. He had hoped t win a medal at the Olympics of 1964 but was prevented from doing so by a cold; however, he did meet the swimmer Anita Lonsborough, whom he married the following year. Then, in 1966, he won gold for the Pursuit at the Commonwealth Games and Commonwealth Youth Championships, which brought the offer of a professional contract with Mackeson-Whitbread for 1967. That year, he was second in the Pursuit at the World Championships. He improved on that in 1968, become World and National Champion in addition to winning four times on the road.

Following his retirement from racing, Porter continued his association with cycling and became the BBC's "voice of the sport." Later, he also commentated on the speed skating (a sport that has some associations with cycling of its own, many professional cyclists having competed in it) and swimming.


José Luis Rubiera
José Luis Rubiera, the now retired cyclist from Gijón in Spain, was born on this day in 1973. His first win as a professional was in no less a race than the 1997 Giro d'Italia when he was first over the line after Stage 19, coming a very respectable 10th overall two days later when the race drew to a close. He came 6th overall in the 1999 Vuelta a Espana, then 8th in the following year's Giro. He was 7th in the 2001 Vuelta, also winning the King of the Mountains classification at the Vuelta a Burgos, finishing the same race in 2nd place for 2002. His first taste of Tour de France success came the next year when his US Postal team won the Stage 4 Team Time Trial, a feat they would repeat the following two years. He managed 3rd in the 2006 Vuelta a Castilla y León, a stage win at the 2007 Tour of Qinghai Lake and another at the 2007 Vuelta a Murcia, then rounded off his career with 10th place at the 2009 Tour of California and 2010 Vuelta a Castilla y León.

Rubiera's palmares looks very much like that of a rider who could have gone further, perhaps building on his early Grand Tour success and winning one for himself; an aim towards which he would have been assisted by being that rare thing, a talented climber who could also perform well in a time trial. However, instead he spent his time as a domestique, albeit a super-domestique - he acted as lead man for none other than Lance Armstrong in five of his seven Tour de France victories, including leading him at the beginning of his legendary Alpe d'Huez ride in 2001 when the Texan recorded a time of 38'01", the fastest since Marco Pantani climbed the mountain 26" quicker in 1997 (a record which remains unbroken at the time of writing, 14 years later).

Rubiera is also unusual in professional racing on account of his education - he earned an degree in engineering in 2004 (unusual in men's professional racing at any rate, degrees and even doctorates are fairly common in the women's peloton), even though he raced three Grand Tours while studying. His skill on the bike, intelligence and likable personality ensured he was both respected and popular among other the riders who elected him as their deputy on the UCI ProTour Council.


1996 Canadian National Road Race Champion Sue Palmer-Komar was born on this day in 1967 in Hamilton. Ontario. Sue had come 2nd in the race in 1992 and 1995, also finishing 2nd in the National Time Trial Championship race, then came 3d in 1997 before taking up mountain biking with the Haro team for a while but enjoyed little success in the discipline. She returned to road cycling with the Jane's Cosmetic team in 2001 and soon began achieving good results again, taking a silver medal at the 2002 Commonwealth Games and then a bronze at the Nationals and 2nd place at the Waalse Pijl a year later. In 2004, she won both the Circuit National Féminin de Saint-Amand-Montrond and the National Time Trial Championship, retaining the title for a second year in 2005. In 2006 she won two stages and the General Classification at the Green Mountain Stagerace before moving on to Colavita in 2007. Since then, her results have not been as impressive and, after a year with them, she left for Advil-Chapstick.


Sprint specialist Robert Förster was born on this day in 1978 in Markkleeberg, Germany. He turned professional in 2001 and straight away did well in stage races, but he really made his mark in 2006 when he won Stage 21 at the Giro d'Italia and Stage 15 at the Vuelta a Espana while riding with the Gerolsteiner team. The next year, he won two stages at the Giro. He added two more stage wins in the 2008 Volta ao Algarve and another at the 2009 Tour of Turkey, then had a quieter 2010. In 2011, he won stages at the Tour of Qinghai Lake, Vuelta a Asturias, another at the Tour of Langkawi and two at the Nature Valley Grand Prix while racing with UnitedHealthcare. he remained with the team through 2012 and won the CSC Invitational in the USA.


Few people outside the Spanish racing scene now remember Enrique Martinez Heredia, who was born on this day in 1953 in the little town of Huesa, yet he was a name to be reckoned with during his short professional career lasting from the late 1970s to early 1980s. He first came to the world's attention by winning the 1974 Tour de l'Avenir, a race for amateurs that frequently serves to reveal future greats, then won the Volta a Catalunya and the Youth Classification at the Tour de France in 1976. . His future Tour de France results were never quite as good, the highlight of his career as a Tourist coming when he finished 29th in Stage 8 1977, but he became National Champion in 1978 and won seven more races and numerous stages before retiring at the end of the 1983 season.