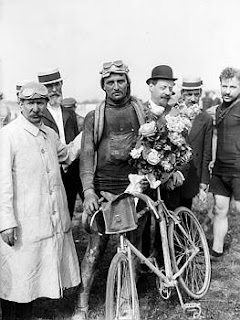 François Faber
Though François Faber was born in France (Aulnay-sur-Iton, 26th January 1887), his father was from Luxembourg and as a result François had Luxembourgian nationality. However, despite his Luxembourgian passport, the rider insisted throughout his life that he was French; he would, therefore, probably not have been pleased had he have known that he would find his place in history as the first foreigner to win the Tour de France.

When he began cycling he rapidly gained the nickname The Giant of Colombes because, at 1.88m tall and weighing 88kg, he was considerably larger than the average man of his day and enormous in comparison to most cyclists. In photographs he looks as strong as his reputation claims him to have been - rather than the flashy, sculpted-yet-soft muscles of a gym obsessive, he had a physique hardened by back-breaking labour as a removal man and docker.

Faber began his professional cycling career with Labor in 1906 and entered his first Tour with them, but did not finish. Two years later, he moved on to Peugeot and entered again, this time winning four stages and achieving 2nd overall, then won the Giro di Lombardia. He departed for the mightly Alcyon, the most successful team in Tour history, in 1909 and it was with them that he not only won the race but, battling through some of the worst weather ever recorded during the event before or since, also won five consecutive stages (six in total) - a record that has not yet been broken after more than a century. He remained with them through 1910 and won three stages that year, coming 2nd overall behind team mate Octave Lapize, also winning Paris-Tours. Now one of the most respected and sought-after riders in the world, he was tempted away to Automoto and spent a quiet two years with them and Saphir Cycles before returning to Peugeot for the next two years, winning Paris-Roubaix, one stage at the Tour of Belgium and a total of four at the Tour de France during the period. 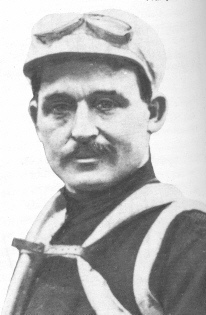 The First World War put paid to European racing until conflict came to an end, and Faber signed up with the Foreign Legion almost as soon as hostilities were declared. He was attached to the 2nd Régiment de Marche of the 1st Regiment, FFL, promoted to the rank of corporal. On the 9th of May 1915, the first day of the Battle of Artois near Arras, his regiment came under attack and lost 1,950 men from a total of 2,900. Faber survived the first waves of the attack unharmed, but then saw that one of his comrades was lying injured in no-man's land. He climbed out of the trench, went to him and had carried him part of the way to safety when he was fatally shot in the back, later being posthumously awarded the Médaille militaire for his bravery.

François Faber was 28 years old when he died. Earlier that same day, he had received a telegram informing him that his wife had just given birth to their first child, a daughter.


Kirkpatrick Macmillan, who was born on the 2nd of September 1812 in Keir, Scotland, died on this day in 1878. While not the inventor of the bicycle - German Karl Drais is usually credited with that, but there are other claimants - he is often said to have been the first to come up with the idea of providing some means of driving the rear wheel, bikes until then being powered by scooting the feet along the ground. He achieved this by means of treadles mounted to a central axle, connected to the rear wheel by con-rods. The wooden frame and heavy iron wheels sound rudimentary today, but the machine was possibly the very first example of what we recognise as a bicycle.

Ercole Baldini, an Italian cyclist who set the Hour Record in 1954,  was born on this day 1933 in a village called Villanova di Forli; and he was so fast he became known as The Forli Train. In 1956, he set another Hour Record after his previous one had been beaten by none other than Jacques Anquetil. The following year he won the Trofeo Barrachi with Fausto Coppi and became National Champion. Then, for 1958, he won the overall General Classification at the Giro d'Italia, beating the legendary climber Charly Gaul in the mountains (though to be fair, Gaul wouldn't have been enjoying the hot Italian weather at all). But even that wasn't enough, so later in the same year he became the World Champion. In 1959, his success began to slacken off a bit, though he was still able to win a stage and come 6th at that year's Tour de France before winning the Grand Prix des Nations and Coppa Placci before requiring surgery on his leg that ended his seventeen year professional career in 1964.

Rigoberto Urán
Born on this day in Urrao, Columbia, in 1987, Rigoberto Urán began cycling at the age of 14 but almost had to give it up when he was forced to take up a job selling lottery tickets three months later after his father (Heriberto; who came 50th overall in the 1986 Tour de France) was murdered by a paramilitary group (some sources say he was killed by crossfire in a battle between drug dealers). Fortunately, it soon became evident that he had talent and by the age of 16 he'd turned professional with the Orgulla Paisa team and gained an impressive collection of Under-17 and, later, Under-19 National titles.

Three years later, he'd made enough of a name for himself to go to Europe and sign a contract with Italy's Tenax, then a year later he joined Unibet, won Stage 8 and came 9th overall at the Tour de Suisse. In 2008, he left the world in no doubt that he had the potential to become a great, coming 3rd in the Giro di Lombardia and 2nd in the Volta a Catalunya. He was 5th in the Tour de Romandie in 200 9and improved his Tour de Suisse finish to 7th overall in 2010. A rider who begins his palmares with results such as these is heading in the direction of the Grand Tours - and once he'd signed up with the British Team Sky, he was entered in the Tour de France. He won no stages (few do in their first Tour), but wore the white jersey for leading the Youth Classification in four stages and may have kept it longer - perhaps even winning the category overall - if he hadn't contracted an illness. Nevertheless, he finished 24th overall, a result with which any Tour debutante who had ridden the race in perfect health would be happy.

His success continued in 2012 with 12th place overall at Paris-Nice; Stage 4 victory and fifth place overall at the Volta Ciclista a Catalunya; five top ten stage finishes (best: fourth, Stage 17), first place in the Youth category and seventh overall at the Giro d'Italia and tenth place overall in the Tour of Poland. During the Olympic Road Race, Urán broke away 8km from the finish with Alexander Vinokourov, a rider fourteen years his senior;   many believed that if the race ended in a two-man sprint Urán's youth would win him the race. With 200m to go, he made the mistake of looking back to see if the peloton was chasing them - Vinokourov realised that his rival's attention was diverted, grabbed his chance and sprinted to victory.

Urán stayed at Sky for 2013 and had his best season to date, winning two stages at the Giro d'Italia (Stage 2, the team time trial; Stage 10) before coming second overall 4'43" behind Vincenzo Nibali - something of a surprise as Sky's leader Bradley Wiggins had been a favourite - after seeing him stop to wait for Wiggins when the 2012 Tour de France winner got stuck behind a crash, many fans wondered if he might otherwise have won. Later, he took four top ten stage finishes at the Vuelta a Espana with a best place of second on Stage 16 before coming 27th overall. For 2014, he has left Sky and will ride for Omega Pharma-Quickstep.


Juan José Haedo was born in Argentina on this day in 1981. Known as a lightning-fast sprinter who can battle his way through the peloton to the line, Haedo has achieved podium finishes in most of the races he has entered and has won many of the biggest events in one-day racing as well as stages at the Tour of California, the Vuelta a Murcia, the Critérium du Dauphiné and the Vuelta a Espana. For 2013, after spending six years with Saxobank, Haedo moved to Continental team Jamis-Hagens Berman and won eight races. Haedo's father Juan Carlos was also a professional cyclist, winner of sixteen races during a career that stretched from 1970 to 1984 and included a National Road Race Championship victory in 1982. His younger brother Lucas Sebastian is a professional too, riding for Cannondale in 2013.


On this day in 2011, toy manufacturer Hornby announced a new product in its famous Scalextric range - a Chris Hoy-inspired velodrome racing set. Cyclists aged four to - well, every age really - got excited and rushed out with their Christmas money. Then the complaints started coming in. Apparently, quite a few sets either didn't work or broke within minutes.