Roger Lapébie
In Tour de France director Henri Desgrange's view, gears compromised the "perfect union of man and machine against the forces of nature" ideal towards which he had always striven to steer the event. Yet even he realised that his riders would need some means of altering ratios if they were going to ride up the mountains and still maintain a reasonable pace on the flat roads, so bikes were permitted to be fitted with a cog on either side of the back wheel, one large and one small, so that the gear could be changed by flipping the wheel over and repositioning it in the drop outs to maintain chain tension. Other systems were in existence - hub gears had been around for some time, there was even one in which pedaling forwards gave a high gear and pedaling backwards a low gear, all of them but had been judged either too heavy or too complex and fragile for use in such a demanding event.

Derailleur gears had been in existence in one form or another for some forty years by the time that Desgrange stepped down after a prostate operation left him in agony. They had their champions, too, and those champions convinced Victor Goddet that such devices were the way forward, because one of the first things he did when he took over the Tour's directorship was change the rules to permit their use. Roger Lapébie, born in Pessac on this day in 1911, became the first rider to try them out when he used them at the 1937 Tour; other riders were more reluctant, considering them all very well for recreational cyclists and women but completely unnecessary for iron-hard athletes such as themselves - and when it became clear that Lapébie's decision to use derailleurs had given him a massive advantage, 1936 winner Sylvère Maes abandoned the race in protest.

Lapébie's advantage was indeed huge: other riders had not worried that he didn't need to stop t change gears because they believed it likely that his derailleurs would break, preventing him from completing the race, but in fact he won by more than seven minutes and the derailleur was largely credited for the victory. Next year, every bike on the start line was fitted with them.

Lapébie was perhaps not the most honest, honourable rider in the history of sport - judges warned him time and time again about his habit of being given a handy push through tough sections by fans. He claimed that he asked them to resist, but years later admitted that he'd secretly ask them to keep doing it. Maes claimed that this was the real reason he'd quit, but considerably more nefarious tactics had been in use for years and rarely led to protest - Lapébie had himself been the victim of enemy riders who would resort to far dirtier tricks, such as the person unknown, believed by Lapébie and others to have been a Belgian rider, who had booby-trapped his bike by sawing partway through the handlebars so they snapped, forcing him to swap to another pair without a bottlecage (in those days was bolted to the bars rather than the frame) so that he got penalised every time he accepted a bottle held out to him from the roadside. From that day onwards, he always took his bike into his hotel room with him at night. 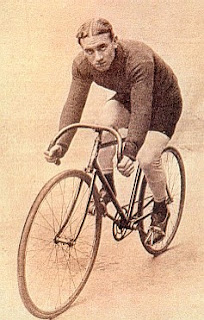 Belgian Philippe Thys, the first man to win three Tours de France and whom Henri Desgrange believed could have won six had it not have been for the First World War, was born in Anderlecht, Belgium on the 8th of October 1889 and died on this day in 1971 at the age of 81.

Thys also won the inaugural Belgian Cyclo Cross Championship in 1910, then the Circuit Français Peugeot and stage races from Paris to Turin and Paris to Toulouse in 1911 before turning professional in order to enter the Tour - he came 6th overall after his first attempt, then won it in 1913, 1914 and 1920. His 1913 victory came after one of the most remarkable events in Tour history: after his fork broke, he was forced to find a bike shop and have it repaired (this being in the days before mechanical assistance and technical back-up) and for which judges penalised him ten minutes.

However, race leader Eugène Christophe's fork also broke later on, thus beginning the famous incident which saw him finding a forge and repairing the fork himself so as to avoid penalty - but judges later discovered that whilst carrying out the repair, he had allowed a young lad named Corni to pump the bellows for him, which they deemed as being the recipient of outside help and penalised him ten minutes too (it was later reduced to three). This allowed Thys to claw his way back and win the stage. He would later lose his lead, but then Christophe's fork broke for a second time and the Belgian secured his lead, despite being knocked unconscious in a crash on the way to Dunkirk. Gustave Garrigou was 8'37" behind him, whereas 3rd place Marcel Buysse crossed the line with a 3h30'55" disadvantage after his handlebars snapped.

Thys may have been the first man to wear the maillot jaune. Officially, it was first given to Eugène Christophe when he led the race in 1919 - and he wasn't at all happy about it, complaining that the other riders called him "canary" (which might not be considered quite so terrible an insult in the modern peloton). However, when he was 67 Thys recalled that when he led the race in 1913, his team manager Alphonse Baugé had given him a maillot jaune to mark him out as leader more effectively than the green armband that had previously been used. Tour director Henri Desgrange apparently had no part in this, suggesting that Baugé had been encouraged to find some means of highlighting the fact that the race was led by a rider on a bike made by Peugeot, the team's main sponsor; Thys remembered that it had been purchased from the first bike shop Baugé could find, which rather suggests he'd been told to buy any jersey that would stand out in the pack. Thys remembered that although it was the correct size, "we had to cut a slightly larger hole for my head to go through."

It has been suggested that, some 43 years after the event, Thys' memory might have been playing tricks on him and there are no contemporary mentions of the jersey; however, he remained mentally sharp right up until his death and was known to be an exceptionally honest rider, so there is little reason to doubt him. If what he said is true, then it might be the case that when Desgrange decided to introduce the maillot jaune in 1919, he was inspired to do so by the yellow jersey of 1913 and chose yellow for the same reason, rather than to match the paper upon which Le Velo was printed as official Tour history states.


Koldo Gil, a Spanish rider who won a stage at the 2005 Giro'd'Italia, was born on this day in 1978. He won two stages in the 2006 Tour de Suisse and led the General Classification until Jan Ullrich won the final stage time trial, finishing the race in second place as a result. After a disappinting season in 2008 he was unable to secure a contract for 2009 and announced his retirement.

1976 Amateur Road Race and 1983 Professional Road Race Champion of Switzerland Serge Demierre was born today in 1956 in Burlata, Spain. 1983 was his best year - in addition to his National title, he won one stage and the Combativity award at the Tour de France. He retired in 1991 and now runs a bike shop near Geneva airport in Vernier.