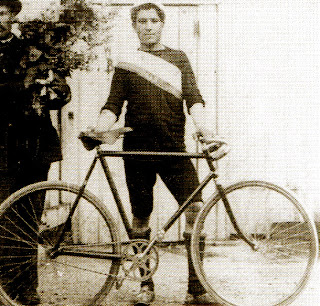 Lucien Pothier
Lucien Pothier, born on this day in 1883 in Cuy, was a French professional cyclist who came second in 1903 Tour de France, the first ever held, behind Maurice Garin. Garin beat him into second place again 1904 in a Tour that saw so much cheating that organiser Henri Desgrange threatened that it would be the last and seems to have genuinely considered never holding it again until a combination of persuasion from others and the enormous income it generated convinced him otherwise. The four top finishers were all disqualified - Garin was banned by the French cycling federation for two years as a result, Pothier for life.

However, he managed to find a way around the ruling and he raced again in 1907. By that time, a new generation of cyclists who trained especially for the Tour had already taken over and he was unable to get anywhere near riders of that calibre, greats such as Louison Petit-Breton, Gustave Garrigou and François Faber, and he abandoned the race. He rode again in 1910, 1911 and then a decade later in 1921 when he was 38 years old, coming 28th, 22nd and 32nd.

Born in Remscheid, West Germany on this day in 1975, Christiane Soeder is a retired Austrian cyclist who won the National Road Race and Individual Time Trial Championships six times each. The first time for both was in 2004; the year before, prior to her relocation to Austria, she hadtaken second place in the German Road Race and ITT Championships, before that she had been a successful duathlete with three consecutive National Championship victories. In 2005 she won the prologue at the Tour de l'Aude and Stage  2 at the Tour de France Feminin in addition to her second Austrian National ITT title, then in 2006 she won both titles again in addition to Stage 1 at the Geelong Tour and the prologue at the Thüringen-Rundfahrt; these victories would be followed in 2007 with gold medals at the National ITT and Criterium Championships and victory in the prologue at the Tour de l'Aude and Stage 5 at the Thüringen-Rundfahrt.

In 2008, Soeder successfully defended her National Criterium title before winning the overall General Classification at the Tour de France Feminin and finishing the Road Race and ITT at the Olympic Games in fourth and seventh place respectively as well as winning silver in the World ITT Championship behind Amber Neben. In 2009 she won the GP Suisse and came second overall at the Tour de France Feminin before winning back the National Road Race and ITT titles; at the end of the 2009 she announced her retirment, but she returned to competition in 2010 to become National Hill Climb Champion, then claimed the National ITT Championship for the sixth time in 2012.

Soeder is a qualified physician; she is also, alongside her sister Stefanie Mollnhauer, co-author of a respected book on women's cycling, Frauenradsport: Der perfekte Ratgeber für Einsteigerinnen und Fortgeschrittene.

Moser's 1994 Hour Record
On the 15th of January in 1994 Francesco Moser - then aged 43 - set a new Veteran Hour Record at 51.840km, again in Mexico City and aboard a bike inspired by the one featuring washing machine parts used by Graeme Obree to set two more Human Effort Hour Records in 1993 and 1994. This distance is greater than the one he set ten years earlier when, aged 33, he set a new "Human Effort" Hour Record at 51.151km.


Retired Italian professional Maurizio Fondriest was born on this day in 1965. His best years were 1988 when he became World Road Race Champion, 1991 when he won the Road Race World Cup and 1993 when he won the Challenge San Silvestro d'Oro, Challenge Giglio d'Oro, Milan – San Remo, Flèche Wallonne, Tirreno–Adriatico, Grand Prix de Zurich and Midi Libre, which gave him a second World Cup and 1994 when he won the Tours of Britain and Poland. He retired in 2004 and now runs his Fondriest firm, manufacturing high-end carbon fibre bikes.

Franco Pellizotti, a stage winner at the Giro d'Italia, Tour of Poland, Paris-Nice and Tour de France (where he also won the King of the Mountains and overall Combativity awards in 2009), was born on this day in 1978. He also won the Memorial Marco Pantani in 2007. Following an anti-doping test that returned "irregular blood values" in 2009, he was suspended from racing while the UCI conducted an investigation - the investigation failed to produce satisfactory evidence against him and sanctions were brought to an early end in 2010, but his previous team Liquigas declined to resign him. He then attempted to take the UCI to the Court for Arbitration in Sport to seek a loss of earnings settlement but, after he asked the Court for a fast resolution, it decided against him, annulled all his results since the 17th of May 2009 (including the Tour de France results listed above) and banned him from racing until the 12th of May 2012. When his ban expired, Pellizotti returned to cycling with the ProContinental Androni Giocatolli team and, a month and a half later, won the National Road Race Champion, came fourth overall at the Vuelta Ciclista a Burgos and was twelfth at the Giro di Lombardia. In 2014, he will race with Astana.

Alberto Fernández Blanco, Spanish professional and father of Alberto Fernández Sainz (also a professional cyclist), was born on this day in 1955. His main claim to fame was finishing the 1984 Vuelta a Espana in 2nd place just six seconds behind Éric Caritoux - the shortest winning margin ever recorded in a Grand Tour. This was his second Vuelta podium place, having come 3rd the previous year. He also came 3rd in the 1983 Giro d'Italia, his first, and 10th in the 1982 Tour de France. He and his wife were killed in a car accident on the 14th of December 1984, shortly before his 30th birthday.

Jason MacIntyre, multiple winner of the Scottish and British Hill Climb Championships who set a new Scottish time trial record in 2007, died on this day in 2008 after being hit by a van on the A82 at Fort William. The driver of the van, an employee of the local council, was fined £500 and had his licence suspended for six months after admitting causing a death by careless driving. MacIntyre's family erected a ghost bike as a memorial which can still be seen at Carr's Corner.

Angela Brodtka, the German rider with Noris Cycling, was born on this day in 1981. Having won two stages in the Eko Tour whilst still a junior, she went on to win stages in the Holland Ladies' Tour, Tour de l'Aude Cycliste Féminin, Giro d'Italia Femminile and Thüringen-Rundfahrt der Frauen.