Marco Pantani
On this day in 1970 in Cesena, Italy, Fernando and Tonina Pantani became the parents of a son they named Marco. Eleven years later, Marco joined the Fausto Coppi CC and was immediately singled out as a rider with promise. By the time he reached adulthood, he was still of small stature; standing 172cm tall and weighing 57kg - the classic and optimum dimensions of a grimpeur, as was confirmed when he came 3rd in his first amateur Giro d'Italia (the Girobio), 2nd a year later and then won the following year.

That same year, 1992, he became a professional and began to reveal himself as not just a talented climber but one of the finest the world had yet seen. Pantani didn't finish his first Giro but came second in the overall General Classification when he entered again in 1994, managing a third place overall finish at his first Tour de France later in the year. He then stayed away from the Giro for two years, did not finish again in 1997 and won in 1998. He came 13th in the 1995 Tour, didn't enter the next year, came third again in 1997 and won in 1998 - two Grand Tours in the same year, a feat that very few have achieved.

Sadly, that great year was the beginning of the end for Pantani - the next year, a haematocrit reading (the rather pointless stop-gap effort to prevent EPO use before an effective test was developed) returned a result of 52%, in excess of the legal 50% limit, and he was disqualified despite the fact that he was never once proved to have doped in any race (however, it was later revealed that after a crash in 1995 his haematocrit reading had been 60.1% - an extremely suspicious figure if correct). It appears that it was at this point that be began his slow downward spiral, failing to finish the Giro in 1999, 2001 and 2002 and coming 28th in 2000 and 14th in 2003. He entered the Tour for the last time in 2000 and didn't finish. Whether or not Pantani used drugs while racing may never be known, but his drug use outside the sport is in no doubt: on Valentine's Day in 2004, his body was found in a Rimini hotel room. An autopsy revealed that he had died of a combination of heart failure and a cerebral oedema brought on by a cocaine overdose. 20,000 people attended his funeral. He was 34 years old.

Alfred Le Bars
Alfred Célestin Le Bars was born on the 14th of March 1888 and died on this day in 1984, aged 95 years. Le Bars is one of the small numbers who guaranteed his Tour de France immortality without achieving great  results (which, while respectable, were nothing to write home about - he came 26th  in 1907, then missed a year before improving to 19th in 1909). He did it simply by how he got there - soon after he began in 1907, other riders discovered that the bike on which he was racing had also carried him to the race, all the way from his home in Morlaix, Finistère, 500km away and almost as far west as you can go in France without ending up in the Atlantic Ocean.

"There was no way of getting to the start in Paris other than by bike, so I rode it in eighteen and a half hours," he told them.


Giovanni Visconti
Born in Turin on this day in 1983, Giovanni Visconti became Italian Under-23 Road Race Champion in 2003, then took the Elite title in 2007, 2010 and 2011. Along the way, he has won  the Grand Prix de Fourmies, the Coppa Sabatini (twuce), the Trofeo Melinda, the UCI Europe Tour (twice), the Tour of Turkey and the Gran Premio dell'Insubria-Lugano along with various other races and numerous stages.

Visconti joined Movistar in 2012 and, in his second year with the team, won Stages 15 and 17 at the Giro d'Italia, coming 35th overall and third in the King of the Mountains and fifth in the Points classification - thus revealing himself to have a rare combination of talents for climbing and for sprinting, shared with a high percentage of Grand Tour winners. He will stay with Movistar for 2014. 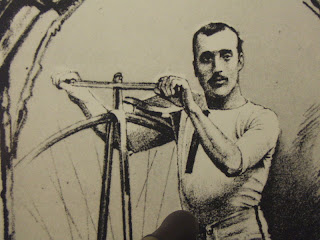 John "Happy Jack" Keen, one of the most famous cyclists and frame builders of the late 19th and (very) early 20th Century, died on this day in 1902. While there is no reliable documentary evidence in support, Keen is believed to have started racing in 1869; there are, however, surviving records from 1872 when he covered 10 miles (16.1km) in 36 minutes - equating to an average of 16.67mph (26.8kph), a fantastic speed on the bikes of the day and, when he went to New York in the later years of the decade, he was billed as the fastest cyclist in the world. Keen had been producing bikes since the early 1870s and introduced the first "big wheel" penny-farthings - with front wheels as large as 51" (130cm) - in 1873, and invented a type of hanging pedal (where the platform is position below the axle) that revolved on a single ball bearing. He was born on the 25th of February 1849 in Worcester, moving to Surbiton where he spent most of the rest of the rest of his life and was 52 when he died of tuberculosis.


Happy birthday to Liquigas rider Daniel Oss, born today in 1987. Oss became Junior Italian Pursuit Champion in 2004 and has gone on to achieve good results in several races including a win at the Giro del Veneto and a stage at the USA Pro Cycling Challenge in 2010, the same year that he completed the Tour de France in 124th place. In 2011 he finished in the top ten on four stages at the Tour (best: fourth, Stage 15) before coming 100th, then in 2012 he was 105th overall. Oss switched to BMC for 2013 and had some success at the Spring Classics with third at the E3 Harelbeke and 12th at the Ronde van Vlaanderen, then came seventh on Stage 5 at the Giro d'Italia. He will stay with BMC for 2014.