Happy Birthday to... the Bicycle 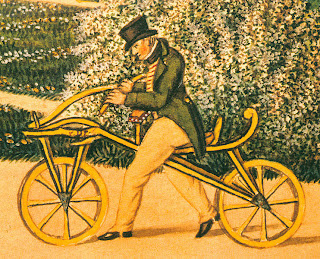 On this day in 1818, Baron Karl von Drais was granted a patent for a machine he'd invented as a means of transport during a period of famine when many horses died of starvation. The machine featured a wooden wheel at either end, connected by a wooden beam upon which the user sat and used his feet to push the device along the ground. Soon becoming known as a draisine or draisienne, it was the earliest known bicycle. Drais' patent applied only in the Baden region of Germany and as such his invention was widely copied throughout the rest of the country, France and - once news spread - the rest of Europe.

Von Drais called his device a Laufmaschine or running machine, but others called it a velocipede or a dandyhorse. Curiously, we owe thanks for the invention to a volcano - Mount Tambora in Indonesia. When Tambora erupted in 1815, following a series of smaller eruptions, it ejected so much dust into the atmosphere that global temperatures dropped by an average of as much as 0.7C and harvests failed throughout the Northern Hemisphere in what became known as The Year Without A Summer; he had aimed to invent a machine that would be able to replace horses both as personal transport and as a way to transport food around the country. In 1848, Drais publicly renounced his nobility, stating that he wished to be known as Citizen Karl Drais in support of the French Revolution. The Prussian government viciously suppressed a revolution of their own the following year and, viewing Drais as an enemy of the establishment, seized his pension and belongings to assist in covering the costs of preventing unrest. He died destitute two years later.

David Zabriskie
Happy birthday to David Zabriskie, cyclist with Garmin-Cervélo and the first vegan in the Tour de France (well, almost - he revealed that he would eat small amounts of salmon during the 2011 Tour). Zabriskie is known for his eccentric sense of humour and unconventional ways, frequently interviewing other riders in the peloton and later posting the results on his website. He also collects Marvel action figures, his collection being stolen along with thousands of dollars of cycling equipment and Olympic memorabilia from his home in 2009 when he and wife Randi Reich were away at the Tour of California.

Zabriskie won a stage in the Tour de France in 2005, beating Lance Armstrong and becoming the first American to have won stages in all three of the Grand Tours. David's career has been held back by misfortune with several crashes ending his races early - the most recent was Stage 9 in the 2011 Tour when he injured his wrist in the crash on a descent that also put Jurgen van den Broeck, Frederik Willems and Alexander Vinokourov (Vino announced his retirement afterwards but has since returned) out of the race. However (or perhaps as a result of this) he is a favourite among fans and journalists. As might be expected, he has a range of nicknames: The Green Hornet, DZ, DZNuts, Dizzy, Captain America and Zup.

In 2012, giving evidence as part of USADA's investigation of doping at the US Postal Team that led to the downfall of Lance Armstrong and disqualification of his seven Tour de France victories, Zabriskie admitted that he too had doped and was given a six-month ban to end on the 1st of March 2013, which he accepted. His results between May 2003 and July 2006, including his Tour stage win, were disqualified. When his ban expired, he returned to cycling but announced his retirement at the Giro di Lombardia that year.

Peter Mitchell, of the Team Sky Track Team, was born on this day in 1990. Mitchell was second in the Sprint at the National Track Championships in 2013.