Emma Trott
Born in Welwyn Garden City, Great Britain on this day in 1989, Emma Trott is not yet as well-known among the general public as her younger sister, the Olympic gold medalist Laura Trott, but the superb palmares she has already built up at the age of 24 marks her out as a rider who will achieve great things. Already she has been National Junior Road Race Champion in 2006, European Under-23 Scratch Champion in 2011 and won a bronze in the National Individual Time Trial Championship in 2012.

While both sisters started out on the track, Emma earned her first good results on the road when she finished Stages 1 and 2 of the 2008 Cheshire Classic in third place. In 2010, riding for the Dutch team Moving Ladies, she beat Annemiek van Vleuten and Marianne Vos in a sprint to win Stage 3 at the Gracia Orlova, then joined them at the Nederland Bloeit team the following year. For 2012 she moved to Dolmans-Boels and began to concentrate on road, remaining with the team when it became Boels-Dolmans in 2013.

Whilst Raymond's palmares is good, he is most famous not for his racing but for being the father of the little girl who, watching her father being resoundingly beaten by Eddy Merckx in a race on television, said: "That Belgian - he doesn't even leave you the crumbs. He's a cannibal!" Merckx, who would become the greatest cyclist of all time, is still known by the nickname to this day.


Thomas Peterson
Thomas Peterson was born on this day in 1986 and was National Junior Road Race Champion in 2004. His best results to date have been winning the King of the Mountains in the 2009 Herald Sun Tour and 4th overall in the 2011 Tour of Turkey.


José Aguilar Rodriguez was born on this day in 1980. The Venezuelan rider has achieved numerous stage wins during his eight years as a professional. 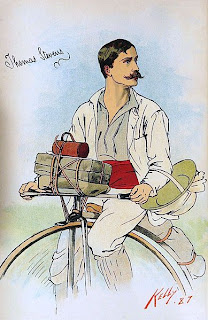 
Andreas Matzbacher, who was born on the 7th of December 1982, died on this day in 2007 when he lost control of his car and collided with a signpost in Austria. The rider began his professional career with Saeco in 2004.