Wim Vansevenant, the Belgian ex-professional and three-time Tour de France Lanterne Rouge (a record) turned soigneur who was arrested in June 2011 after allegedly trying to smuggle doping products (which he later claimed were for him and had been, to the best of his knowledge, legal amino acids) into Belgium, was born in Diksmuide on this day in 1971.


"Lanterne Rouge is not a position you go for. It comes for you." - Wim Vansevenant


Happy birthday to Thomas Rohregger, the Austrian rider who came 4th overall in the Tour of Austria for Leopard-Trek in 2011. He rode for RadioShack-Nissan in 2012 following the RadioShack/Leopard-Trek merger and came 31st overall at the Giro d'Italia. Rohregger was born in Innsbruck on this day in 1982. 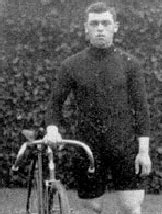 Ernest Payne
Ernest Payne, born on this day in 1884, worked as a carpenter after completing his education but was destined for worldwide fame as a cyclist - and was there ever a man with a name more suited to professional cycling?

We know a surprisingly large amount about Payne's early life - just a century ago, records were not kept at stringently as they are today and it's common for mystery to surround the births and deaths of cyclists during the earlier years of the sport. Some were not sure even of their own birth dates and many vanished from the public eye in retirement and were never heard from again, so that we don't know what became of them, when and where they died (some are feasibly still alive, though would be extremely elderly now). For example, we know that Payne was born in a cottage located at 221 London Road, Worcester: the house, Cyclopunk is informed by Graham Taylor (who lives nearby), is still there near to an unattractive commercial building, as is 224 London Road to which he later moved - the bay windows of both properties were made by Payne at his joinery business (thanks, Graham!).

We also know that Payne's boss when he was a carpenter must either have been interested in cycling or simply in encouraging his employees to enjoy their lives outside work because he allowed him to take time off to train with his brother Walter - Payne would repay the man's kindness with a gold watch once his winnings gave him the means to purchase such an object. His first official race took place on the 14th of July in 1902 at Stourbridge, when he competed with the St. John's CC. He crashed hard enough to destroy his bike, but then won the half-mile handicap race on a bike he borrowed from another club member. Specialising in one-and-a-half-mile races, he won thirteen of the fourteen races he entered and within a year was known as "The Worcester Wonder" in the cycling press. Graham Taylor says that Payne is all but forgotten in Worcester, and all cyclists will agree with him that this is a very great shame.


Happy birthday to David Daniell, the British track sprint rider who won three silver medals at the 2011 British Track Championships and a bronze for the Kilo at the Championships a year later. David, from Middlesborough, was BBC Young Sports Personality of the Year in 2006. He was born in 1989.

Many people have made a living from cycling, fewer make it their life to such an extent that their entire being is weaved into the sport. One of them is Jim Ochowicz, who was born on this day in 1951. He would represent the USA in the Olympics of 1972 and 1976, then was inducted into the USA Cycling Hall of Fame in 1977 in recognition of his services to the sport. In 1981, he set up the 7-11 Cycling Team which began as an amateur organisation before transforming itself into a team that competed at the very highest levels, including the Tour de France. In 1990, it found a new big-name sponsor and was renamed Motorola, becoming the first team to use race radios. Motorola eventually folded in 1996 after sixteen seasons. In 2002, Ochowicz was back, serving a four-year tenure a president of the USA Cycling Board of Directors, then in 2006 he set up the BMC Racing Team which is still racing the Grand Tours and ProTour circuit under his direction to this day.