Jacques Anquetil
Today is the anniversary of the death of Mr. Chrono, the great Jacques Anquetil. Anquetil was the first cyclist to achieve five overall victories in the Tour de France, including his incredible win in 1961 when he wore the maillot jaune in every stage of the race. He also won the Giro d'Italia twice, the Vuelta a Espana once, the Critérium du Dauphiné Libéré twice, Liège–Bastogne–Liège and Bordeaux–Paris once, Paris-Nice five times and the Grand Prix des Nations nine times, among many other victories. Bernard Hinault, who detests being compared to the cycling giants that came before him, says that being compared to Anquetil "is an honour."

Anquetil was famous for living the high-life. The tradition on the Tour is for riders to live an almost monastic existence, devoting themselves to the race and to the race alone - for many years, managers made sure women were kept well away from the riders so as not to tempt them into anything that might use up precious energy (though there were always a few riders who gave in to temptation,  as well as those who rode as independents and could do what they liked such as Henri Pépin - see below); whereas Mr. Chrono always insisted that the best way to prepare for a race was "a good pheasant, some champagne and a woman." Often on Tour, he would hold raucous parties well into the early hours in his hotel room, then show up on the start line the next day apparently in the depths of a terrible hangover - and would then proceed to drop all his rivals.

The French deeply admired Anquetil; after all, he achieved his five Tour victories during an era when the race enjoyed a popularity in the nation that it had not enjoyed before and has not since. Yet he was never much liked - there is something in the collective Gallic temperament that prefers heroes to be flawed. Anquetil was not flawed, he was perfect; hence France much preferred his rival Raymond Poulidor, who never won a Tour but came second five times.

There are those who, with good reason, believe the playboy gourmand image was all a deliberate sham, that Anquetil trained as hard and lived as strictly as any other Tour winner: those hotel parties really happened and really were as raucous as rumoured, but a few people who were there to remember them have hinted that the great rider only stayed for the first hour or so before sneaking away to a quiet night's sleep in another hotel, having paid his guests to swear blind that he'd been there all along. The dreadful hangovers were faked, too; the psychological effect on rival riders when he effortlessly dropped them the following day, meanwhile, was very real. Once he retired, things were different: he never rode his bike again after 1969, and although he officially begun a new life as the farmer of Le Domaine des Elfes (his farm near Rouen), he really devoted himself to fine food and wine in a way that only a wealthy Frenchman could, and was only 53 when he died of stomach cancer in 1987.

Anquetil's rivalry with Poulidor had, at times, taken a distinctly nasty turn and, towards the end of his career, became hatred. Towards the end of his life, however, they would become friends. Poulidor, who is still with us today, still remembers some of the last words Anquetil spoke to him, while he lay on his death bed: "My friend, you will come second to me once again." 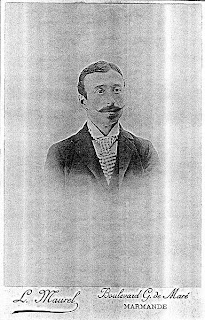 Born today in 1864, Henri Pépin was an independent with the means to ride the Tour de France simply for the experience of doing so - in the days when other independents (and sometimes, professionals) scraped by on little and lodged wherever they could find and afford, Pépin hired a pair of riders named Henri Gauban and Jean Dargassies to support him (and who, as a result, are the first riders to have ridden a Tour purely to support another rider rather than to attempt a win for themselves - the first domestiques) as he rode at his own pace, staying at the finest hotels each night and dining at the best restaurants in three Tours. In 1907, he was given the race number 59 (in a field of 112) but didn't race by any definition of the word - in those days, the winner was decided by the amount of points gathered rather than by shortest elapsed time and so Pépin was able to treat each day as nothing more than a leisurely jaunt about the countryide with no fear of being kicked out due to time limits. In fact, they finished Stage 2 a whole twelve hours and twenty minutes after winner Emile Georget, the more serious riders having set off at 5.30am while Pépin was busying himself in his fellow riders delicately termed "conversation with a lady."

A little surprisingly, the crowd didn't assume Pépin was nothing but a useless, spoiled playboy and he soon earned the affectionate nickname Count or Baron Henri. Their good nature, however, was deserved: one day, Pépin and his proto-domestiques came across another rider named Jean-Marie Teychenne who had fallen into a ditch and was too hungry to pull himself out and continue. Teychenne insisted that for him the race was over; he was content to be left there until the broom wagon came for him.

"Nonsense!" Pépin told him, instructing Gauban and Dargassies to pull the man out of the ditch. "We are but three but we live well and we shall finish this race. We may not win, but we shall see France!" The three were now four, with Pépin merrily taking Teychenne along for the ride and paying for him also to enjoy the highlife.

In Stage 5, Pépin decided he'd had enough of the game and paid his assistants a sum equal to the prize awarded to the race winner, then caught a train home. Dargassies - who, it appears, knew Pépin from the 1905 Tour which they had both ridden - went with him while Gauban elected to continue with the race and did rather well for a while, narrowing the enormous gap that had opened up between himself when he was with Pépin and the race leader to just 36 minutes. He was then beset by misfortune and abandoned during Stage 11. He had entered every Tour since it began, but this was his last. Dargassies also never entered again, but Pépin returned in 1914, the year that he died of what was then termed "athleticism" - most likely, a heart attack. 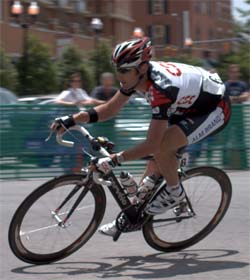 Bobby Julich, born on this day 1971 in the Texan town of Corpus Christi, was one of those riders who probably could have achieved Tour greatness - as is suggested by his 3rd place finish in 1998, the year he also won the Critérium International - but was instead content to ride as a domestique supporting others; perhaps due to an unwillingness to push himself as hard as he otherwise might due to a heart condition diagnosed shortly after his professional career got under way with Motorola where he rode alongside fellow  young Americans George Hincapie and Lance Armstrong.When Motorola pulled out of cycling at the end of the 1996 season, he went with Armstrong to Cofidis, remaining with them through 1998 (the year of the Festina Affair) when Armstrong was out of contention due to cancer. He never quite achieved the same results as that year, but enjoyed results that by anyone's standards were successful and won a time trial bronze medal at the 2004 Olympics. Tyler Hamilton, who won the race, confessed in 2011 to having doped at the event, making his victory void; which means that Julich should now be listed as having taken second place. At the time of writing, this change has not yet been made.

On this day in 1912, Ernest Alfred Johnson was born in Putney, London. Johnson won bronze medals for the team pursuit events at the Olympics in 1932 and 1936. He died in 1997, nine days after his 85th birthday.

On this day in 1933 Marcel Berthet of France set a new hour record at 49.99km - the current Official (bikes deemed not significantly different to that ridden by Eddy Merckx when he set his own record many years later), Best Human Effort and IHPVA/WHPVA categories had not yet been established; Berthet's record was, therefore, the official world record at the time though it's now classed as an IHPVA/WHPVA record. It was not his first - he'd also set an hour record in 1907 and two in 1913.

On this day in 1941, The Pedal Club was formed. Originally a cyclist's luncheon club (a group of people who meet weekly or monthly to have lunch and discuss shared interests, something that seems to be dying out), it grew to become a powerful organisation frequently attended by the most important and illustrious names in the sport. It still meets monthly to this day, with membership and guest lists described as a "Who's Who" of British cycling.