Andrey Kivilev
Born in Taldykorgan, Kazakhstan on this day in 1973, Andrey Kivilev turned professional with Festina in 1998 and stayed with them for two years, weathering the Festina Affair storm but making little impact with his results. In 2000 he went to AG2R and 32nd at the Tour de France; then in 2001 he switched to Cofidis with whom he would spend the rest of his career and life. That year he won Stage 5 at the Critérium du Dauphiné, the General Classification at the Route du Sud and was fourth overall at the Tour de France; in 2002 he was 21st overall at the Tour.

During Stage 2 at Paris-Nice on the 11th of March 2003 Kiviliev collided with Marek Rutkiewicz and Volker Ordowski, falling heavily. Rutkiewicz and Ordowski were unhurt, but Kivilev broke two ribs, fractured his skull and entered a coma. He died at 10am the following day, aged 29. Following Kivilev's death, the UCI made helmets compulsory in all races, as they had tried to as long ago as 1991 but were prevented by rider protests - ironically, at Paris-Nice.

Anna Meares
In 1994, two Australian sisters - Kerrie, aged 11, and Anna, aged 10 (they'd have probably reminded you that they very nearly 12 and 11, as little girls do) - watched Kathy Watt win her gold medal for the road race at the Commonwealth Games. Both of them fell in love with cycling and decided to follow Watt into the sport. Fortunately, their parents were of the type who believe that children should be encouraged to chase their ambitions and didn't mind the regular four-hour round trips to their nearest velodrome, and before too long a coach noticed that the Meares girls had talent to go with their ambition. Eighteen years later, Kerrie had been a National Champion eight times over and a World Champion once. Her little sister had been a National Champion fourteen times, a World Champion eleven times and had won two Olympic gold medals.

Anna's first big victory was the 500m at the World Junior Championships in 2001, then a year later she was third in the Sprint at the Commonwealth Games and a year after that second in the Keirin at the Elite World Championships. In 2004 she won the 500m at the Worlds, the Nationals and the Olympics in addition to the Sprint at the Sydney round of the World Cup; then in 2005 she won the Sprint and the Keirin at the Oceania Championships, the Nationals and the Sydney round of the World Cup and took a silver and a bronze at the Worlds. Over the next few years she would win the Nationals Sprint three times (2006, 2009, 2011), the Nationals Keirin three times (2006, 2007, 2011), the Nationals 500m once (2007), the Worlds 500m three times (2007, 2010, 2012), the Worlds Sprint once (2011), the Worlds Keirin twice (2011, 2012), three gold medals at the 2010 Commonwealth Games as well as numerous gold, silver and bronze medals at many other events. All that despite an accident at the 2008 World Cup which left her with a broken neck - though such a minor injury didn't prevent a rider of Meares' calibre from qualifying for and riding in the Olympics that summer, where she was beaten by Victoria Pendleton. 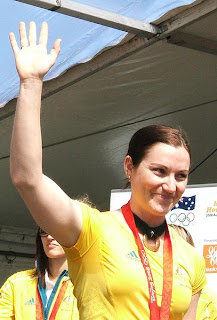 Since the 2008 Games, when Meares got through to the finals due to the relegation of Guo Shang, she and Pendleton have been rivals. Lurid tales of sworn enmity and blistering hatred have been somwhat over-embellished by the media - presumably, these are the journalists who don't bother to actually watch women's racing and thus have to invent drama rather than reporting the real drama taking place on the track (though it's probably safe to say that they don't exchange Christmas cards); as a result, when they competed against one another in the Sprint in London at the 2012 Games, the race was immediately termed a grudge match, the decider and all sorts of other poetic things. It did not pass without incident: during the race, Pendleton veered very slightly out of her lane, crossing into Meares'. Meares reacted by pushing her away, using her elbow on Pendleton's leg. Some fans - mostly British, but a fair few from elsewhere including Australia - were initially angry at the judges' decision to relegate the British rider; however, once the slow-motion replay had been aired, all but the most die-hard Pendleton fans admitted that Meares had won fair and square.

His greatest claim to fame, however, dates from the 1911 Tour when, on the 10th of July during the 366km Stage 5, he became the first rider to reach the 2,645m top of the Col du Galibier, which featured for the first time in the Tour that year (and had inspired Henri Desgrange to pen the famous and distinctly purple-tinged words "O col Bayard, O, Tourmalet... next to Galibier you are worthless"). In 1911, the modern tarmac road that snakes up and over the mountain today was still many years off in the future; then it was little more than a rough track, made of loose gravel, and had only recently been made passable by cars - previously, the only traffic that ventured up were the mule trains led by official traders and single mules led by smugglers, and Desgrange's concern that the riders might be eaten by bears if he sent them into the mountains was a very real one.

The weather on Galibier that day when the Tour first went up was atrocious, wet and windy and cold. Georget, who along with Gustave Garrigou and Paul Duboc had been one of just three riders to ride all the way up, arrived in a terrible state to where the race officials waited at the summit - he'd lost control on the rough surface several times, falling into a meltwater stream on at least one occasion, and was caked in filth, soaked to the skin and chilled to the bone. Throwing his bike down in the road, he stormed up to the officials with a face like thunder. "Ça vous met un coin dans la bouche!" he spat at them - "That's given you something to think about!" - then got back on his bike and rode away.

On Stage 3, Georget had suffered two near-disasters when he was first hit by a car and then fell into a ravine and although he was the fastest rider to the top of what has become one of the most legendary climbs in cycling, he never managed to catch up with Garrigou, who finished first overall, and Duboc, who was second, and had to settle for third place.

Émile was the younger brother of Léon, who won the Bol d'Or nine times; they sometimes teamed up, doing so to win the Brussels 24-Hour Tandem race and the Six Days of Toulouse in 1906.

In 1992 Darren Ross Smith - who was born in Yatala, Australia on this day in 1972 - finished the Postgirot Open in third place, then represented his nation in the road race at the Olympic Games, finishing in 16th place. A little over three months later, on the 18th of November, he was killed in a road accident.

Carla Ryan, born in Nathalia, Australia on this day in 1985, was National Elite Time Trial Champion and National Under-23 Road Race Champion in 2007; then National Time Trial and National Road Race Championship, both at Elite level, in 2009. She turned professional with  Cervélo Life Force in 2008 and remained with them until the team - by then known as Garmin- Cervélo - closed in 2011, at which time she and most of her team mates went to AA Drink-Leontien.nl for 2012, a superb year in which the team won race after race and she took second place at the Tour de Feminin Krásná Lípa and won Stage 5 at the Tour de l'Ardèche. Sadly, the end of the season brought bad news - AA Drink-Leontien.nl will not continue into 2013; Ryan has not yet announced her next team.

Ben Kersten, born in Wollongong, Australia on this day 1991, won the Kilo at the Junior World Championships in 1998 and 1999, then specialised in track racing for a decade during which he won nine National titles, another World Championship, the Kilo at the 2006 Commonwealth Games and numerous other races at the Oceania Championships, the World Cup and more. From 2009 onwards, he has branched out into road racing; among other races he has won stages at the Tour of Atlanta, Tour of Geelong and Tour of Murray River in addition to victories at a number of one-day races.