Charles Holland
Born in Aldridge, Great Britain on this day in 1908, Charles Holland was a natural athlete who played cricket and soccer, when he dreamed of one day playing for the Warwickshire cricket team and had an audition to play soccer for Aston Villa. His first bike was a 24"-wheeled machine bought by his father - who was himself a cyclist and had set a Walsall-Matlock record time - for Holland's older brother Walter; it was then handed down to him when Walter grew too big for it. Aged 12, Charles accompanied his father on a cycling tour. In 1927 he entered the Wyndham Novices 25-mile time trial and came second, his first race; then in 1928 he won the Walsall Roads CC's 10-mile race. In those days, road racing was banned in Britain by the National Cycling Union so Holland tried track racing, but it didn't suit him - except in a sprint, when he was almost unbeatable.

In 1932, the final year in which the Olympics road race was run as a time trial, Holland was selected to compete for the Great Britain team alongside Frank Southall, Ernie Johnson, Bill Harvell and Stan Butler and the team came fourth overall; then in 1934 he rode in the World Championships with Fred Ghiliks and Percy Stallard who would later set up the British League of Racing Cyclists, which stood in opposition to the NCU and returned road racing to Britain (its first race, Llangollen-Wolverhampton, grew into the Victory Cycling Marathon after the Second World War and then, over the years and after a four year hiatus at the start of the 21st Century, became the Tour of Britain). They came third behind Italy and France. Holland also rode in the 1936 Olympics in Berlin; years later he told how, while out on a training ride, he had stopped for a rest on a bridge crossing the autobahn when a cavalcade including a open-topped Mercedes carrying Hitler passed underneath. Had he have had a brick, he said, he could have prevented the War. Later that year, he won the Best British All-Rounder Award, a year later he was commemorated with a page in the Golden Book of Cycling.

Today, Holland has been criminally almost forgotten except among cycling historians and a dwindling number of cyclists, a few of whom were fortunate enough to have seen him race. He deserves much more because, with Bill Burl, he was the first British rider to ride in a Tour de France, competing in 1937. Considering the thinly- veiled (and sometimes quite open) dislike the French organisers and fans often displayed towards foreign riders, Holland and Burl were initially welcomed with open arms - in an interview towards the end of his life, Holland still remembered how he had received a polite and warm response to his application to ride and that the organisers offered to pay all of their costs. But then, it almost didn't happen: in June, he caught his foot in a rabbit hole and fell, snapping a collar bone that had only recently healed following a crash at a track in Wembley earlier in the year. News of his accident reached France and were misunderstood, the two riders being somewhat to surprised to read in L'Auto just a fortnight before the race was to begin that neither of them would now be riding. They contacted Henri Desgrange for clarification and must have been very relieved the next day when he sent a telegram informing them that he was very happy to confirm their places.

When they arrived in France, things immediately took a turn for the worse. Neither man had ever met Pierre Gachon, a French-Canadian who would be riding with them to form a British Empire team, before and neither man thought much of him when they did, finding him amateurish and, in Holland's opinion, unlikely to do well in "a second-class British event," never mind an undertaking such as the Tour. As a result, it might not have seemed particularly disastrous at the time when he abandoned during the first day. On Stage 2, a far greater disaster: Burl crashed and broke his own collarbone, forcing him to also abandon. Holland decided to continue alone.

He probably wouldn't have made it much further were it not for his considerable will and determination and, perhaps most of all, more French support, this time from the French team (this was during the days of national teams rather than trade teams) understood that road racing had been banned by the British cycling federation and that Holland was inexperienced as a result, so they adopted him as a sort of mascot and let him stay with them in their hotels, fed him and even managed to provide him with mechanical assistance from their support van. It seems that the organisers, on the other hand, no longer viewed him as favourably as they had - he revealed later that he had been left with the impression that they wanted him out of the race. We'll never know if this was because they had begun to fear he might do better than expected and make a hero of himself in the process or if it was down to Desgrange's pathological dislike of riders receiving assistance during the race because of what happened next.

On Stage 14c (the last of three stages on that one day), he punctured and, when he'd fitted his replacement tubular tyre, discovered that the seal in his pump had perished in the hot sun and left him unable to pressurise the tyre more than halfway, so he had to keep his speed low. Soon, he had two more punctures. He remembered that a crowd of spectators, peasants, crowded around him and tried to cheer him on but none could help further than that. The local priest brought him a bottle of cold beer which he gladly accepted and drank, assuming that his Tour was over. Then, a miracle - somebody showed up with a  tyre for him, but when he fitted it he was in such a hurry to inflate it that he bent the piston rod of his pump, rendering it useless. The peasants managed to find another one and the tyre was eventually inflated, but turned out to be such a loose fit on the wheel that the bike could not be ridden. Once again the peasants brought salvation, finding another tyre which turned out to be a better fit and he could finally set off - but he knew that he was now so far behind that he stood little chance of doing well. He recalled flagging down a press vehicle and asking for a lift to the finish, but they tried to persuade him from giving up and grabbed his jersey to pull him along. "I did not wish to finish this great race unless it was by my own efforts," he later said and finally, having ridden more than 3,200km, he called it a day and abandoned the race. No other British riders would enter for almost two decades.

The Second World War brought the Tour and most European events to a temporary close and, by the time it was over, Holland was both too old to continue as a professional and prevented by the arcane rules of the day to return to amateur competition. He used the money he had won as a rider to set himself up as a newsagent, started playing golf, at which he became quite successful, and rarely, if ever, mentioned his previous career. His two daughters, Nina and Frances, had seen some of his trophies but had no idea who their father had once been until 1962 when they attended a function at the Royal Albert Hall and he was invited up onto the stage to stand alongside Louison Bobet, Jacques Goddet and Brian Robinson, the man who in 1958 had become the first British rider to win a Tour stage. In 2007, 18 years after he had died, they discovered a suitcase in the loft. Inside it were letters from fans, photographs and articles clipped from newspapers and magazines, medals and jerseys from the 1932 and 1936 Olympics and, most poignant of all, the jersey he wore in his Tour de France.

Aldo Ronconi
Born in Brisighella, Ravenna on the 20th of September 1918, Aldo Ronconi turned professional with the Legnano team in 1940, winning the Giro dell'Umbria that year. After the Second War, he became National Road Race Champion in 1946, also winning the Giro di Toscana and Stage 15 at the Giro d'Italia.

Ronconi entered the Tour de France for the first time in 1947, the first edition of the race since 1939. That year, the Italian team was made up of Italians resident in France as the peace treaty between the two nations had not yet been formalised and they were, therefore, technically still at war. He won Stage 3, wore the maillot jaune for two days, and was fourth in the overall General Classification. After retiring from competition in 1952, he ran a bike shop in Faenza for many years and was well-known among the local cycling enthusiasts; remaining in the city until his death at the age of 93 on the 12th of June in 2012.

"How ExperiencePlus customers met Aldo Ronconi," ExperiencePlus
Olaf Pollack, who was born in Räckelwitz, East Germany on this day in 1973 and turned professional with Agro-Adler-Brandeburg in 1997, picking up numerous good results in the subsequent years before switching to Gerolsteiner in 2000 and finding more success on track and on the road, including third place in the Points competition at the 2004 Giro d'Italia. The following year he went to T-Mobile, then in 2007 to Wiesenhof Felt and in 2008 to Volksbank. In August 2009, Pollack announced he would be retiring immediately from competition due to an eye problem, which later turned out to be a detached retina. A month later, news emerged that he had failed a doping test with his A and B samples both proving positive for a drug that has never been revealed - he was banned for two years.

Born in Gemla, Sweden on this day in 1980, Gustav Larsson was National Time Trial Champion in  2006, 2007, 2010, 2011 and 2012. He turned professional with Fasso Bortolo in 2003, then went to La Française des Jeux in 2006 for a year before joining Unibet, which got into a row with the Amaury Sports Organisation that year and was blocked from entering Paris-Nice, the Tour de France and, when other race organisers sided with the ASO, all the other major events; it closed down as a result. Larsson then signed to Saxobank and remained with them for four years, during which time he won the Tour du Limousin (2010), before joining Vacansoleil-DCM for 2012 and winning Stage 1 at Paris-Nice. Larsson is married to Veronica Andrèasson, also a racing cyclist. 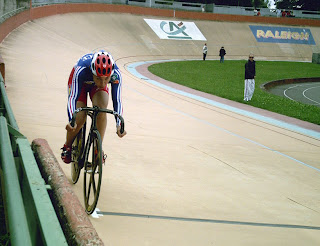 Néstor Mora, born in Bogota, Colombia on this day in 1963, was Amateur National Champion in 1984, won Stage 9 at the Vuelta a Espana in 1990 and rode the Tour de France four times with his best finish, 63rd overall, coming in 1987. On the 20th of February in 1995 he went  out on a training ride in Manizales and was killed by a truck.

Mariano Martínez was born in Burgos, Spain on this day in 1948 but took French nationality in 1963 and competed for France after that date. In 1972, he was sixth overall in the Tour de France; he then came eighth two years later and in 1978 he was tenth, winning Stage 11 and the overall King of the Mountains. He won another stage, 17, in 1980.

Danny Hart, born in Redcar, Great Britain on this day in 1991, was World Downhill Mountain Bike Champion in 2011.

Kathleen Shannon, born in Salisbury, Australia on this day in 1964, was National Road Race Champion in 1990 and 1991. In 1992, she was seventh in the Olympic Games road race.

Maria Lawrence, born in Market Harborough, Great Britain on this day in 1970, was National Road Race Champion in 1996 and 1997.