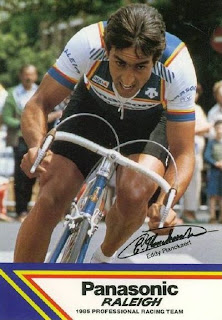 Born in Nevele, Belgium on this day in 1958, Eddy Planckaert is the youngest of three brothers who created a cycling dynasty now into its second generation. He had already won three National Championship titles in the Novices and Junior classes when he won the Omloop Het Volk for Elite riders without a contract in 1980; shortly afterwards he began his professional career with Mini Flat-Vermeer Thijs.

In 1981, Planckaert went to the Tour de France and won Stage 12b - other good finishes, including two fourths, two thirds and a second put him on course for a good overall placing until he abandoned after Stage 14. He entered again in 1982, 1984 and 1986 but it wasn't until 1988 that he completed the race, winning the Points competition; he then failed to finish again in 1989 and 1990. However, although brother Willy won the Points competition 22 years before Eddy and Walter won a stage in 1978, the Tour wasn't really their sort of race - they came from rough, tough Flanders stock, hardmen who rode best in the always difficult and sometimes near-impossible Northern Classics. All three of them did well in those races, but Eddy was the best because in 1990 he won the Hell of the North, Paris-Roubaix - perhaps the hardest and most difficult race of all. He won it against Steve Bauer in a photo finish that proved his advantage at the finish line to be less than 10mm.

He also achieved more wins overall than his brothers with around 123 in total, despite a much shorter career (12 years; Walter was a professional for 17 years and Willy for an incredible 24). Among them were five stages at the Vuelta a Espana and the GP Briek Schotte in 1982; a stage at Paris-Nice and the Brabantse Pijl in 1983; the Omloop Het Nieuwsblad as well as stages at the Tour de Suisse, the Tour Méditerranéen, Paris-Nice and the General Classifications at the  Etoile de Bessèges and the Ronde van België in 1984; a second Omloop Het Nieuwsblad and stages at Paris-Nice and the Vuelta a Espana in 1985; the E3 Harelbeke and a stage at the Giro d'Italia in 1987; the Ronde van Vlaanderen, often called the second hardest Classic after Paris-Roubaix, in 1988 and a second E3 Harelbeke in 1989.

Eddy retired in 1991. In 2002, Flanders' biggest TV station Vlaamse Televisie Maatschappij began broadcasting The Planckaerts, a "real-life" show focusing on Eddy's life and familu. It ran to twelve seasons and over a hundred episodes before ending in 2009, after which Eddy starred in M!LF (Man! Liberation Front) on rival station 2BE.

Philip Hindes
Philip Hindes was born in Krefeld, Germany on this day in 1992, the son of a British Army officer and a German mother. He holds dual nationality and raced for the country of his birth as a junior, having earned a place at a specialist sports academy, then switched to British Cycling in 2010. He began competing in road race events aged 15 but, after two years, decided to concentrate on track sprinting.

In 2012, Hindes competed for Britain at the Olympic Games and caused a row after he crashed at the start of the Men's Team Sprint, then told the BBC ""We were saying if we have a bad start we need to crash to get a restart. I just crashed, I did it on purpose to get a restart, just to have the fastest ride. I did it. So it was all planned, really." Olympic and UCI regulations state that a races "can be re-started if one of the riders suffers a “mishap”, but it must be a mechanical fault or genuine accident;" not if a rider deliberately crashes. Hindes then retracted what he'd said earlier, then told reporters "My back wheel slipped and totally lost control and I couldn’t handle the bike any more and just crashed." British Cycling explained that Hindes, for whom English is a second language, had not meant to say what he originally said - and, rather surprisingly, the Olympic judges believed them. 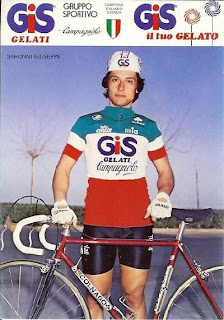 The tifosi - the obsessive Italian fans - love a good cycling rivalry: Binda and Guerra, Bartali and Coppi, Moser and Giuseppe Saronni, who was born in Novara on this day in 1957. Saronni came to note in 1974 when he won the Sprint at the National Junior Championships and came second in the same race at the European Championships; he successfully defended his National title the following year. In 1977 he won eight times, including the General Classifications at the Giri di Puglia and Sicilia, then a year later he won 25 times - including the General Classification at Tirreno-Adriatico and Stages 2, 7 and 8 at the Giro d'Italia, where he was fifth overall. In 1979, among 30 victories, he won the Tour de Romandie and three stages, the Points competition and the General Classification at the Giro.

In 1980, Saronni became National Road Race Champion and won the Waalse Pijl along with seven stages and the Points competition at the Giro; he won the Points competition for a third time the following year. In 1982 he won the Tour de Suisse, Tirreno-Adriatico, the Giro di Lombardia and the World Championship at Goodwood, where he beat Greg Lemond and Sean Kelly after a sprint so fast it earned him the nickname "The Goodwood Rifleshot." The following year saw him win Milan-San Remo and come second at Liège-Bastogne-Liège, then win three stages, a fourth Points competition and a second General Classification at the Giro.

Saronni never achieved results quite as impressive ever again, though he would win four more stages at the Giro for a total of 24 - the sixth highest in history and only one fewer than Eddy Merckx (though far short of Mario Cipollini's 42, the Grand Tour record). He retired in 1990 and later became manager of the Lampre-ISD team until he was forced out in 2011 when his name was one of the 32 implicated in the Mantova doping scandal.


Audrey Cordon was born in Pontivy, France on this day in 1989. In 2008 - the year that she was third in the Individual Pursuit at the Elite National Track Championships - she signed to Vienne Futuroscope, the team for whom she has ridden ever since; in 2011 she was third at the Elite National Individual Time Trial Championships and in 2012 she won the GP Cholet-Pays de Loire and was second at the National Individual Time Trial Championships, showing that she had the potential to become real contender at one-day and stage races in the coming years - and then in 2013, when she won the Tour de Bretagne, she proved it.

Giovanni Valetti, born in Vinovo, Italy on this day in 1913, won the Giro d'Italia in 1938 (when he also won the Tour de Suisse) and 1939. In 1939, he faced stiff competition from Gino Bartali who took the race lead in the mountains; Valetti then took it back with one stage to go and managed to match Bartali's attacks in the final stage.

Bernard Gauthier, born in Beaumont-Monteux, France on this day in 1924, won the single-day 560km Bordeaux-Paris in 1951, 1954, 1956 and 1957 and the National Road Race Championship in 1956. He rode the Tour de France eight times and won Stage 20 in 1948; two years later he held the maillot jaune for seven days and finished in 17th place. He also performed well at the other Classics, coming second at the Ronde van Vlaanderen in 1952 and at Milan-San Remo in 1955.

Yukiya Arashiro, born on this day in 1984 in Ishigaki, Japan, siged for two years with BBox-Bouygues Telecom in 2009 and was selected by the team to ride that year at the Tour de France where he and Fumiyuki Beppu became the first Japanese riders to have ever completed the race. The following year he was selected for the Giro d'Italia, came third on Stage 5 and became the first Japanese rider to have completed two Grand Tours. He signed to Europcar for two years in 2011.

Fritz Scheller, born in Nürnberg on this day in 1914, was National Amateur Road Race Champion in 1932, 1936 and 1937, then turned professional with Adler in 1938 and finished the Elite Road Race Nationals in third place that year and again in 1940. In 1942 he joined Express, with whom he spent the remainder of his career, becoming National Criterium Champion in 1946. Scheller rode for Germany at Olympics of 1936, the year that the Games were taken over by the Nazis and used as a propaganda machine; he shared fourth place with Frenchman Robert Dorgebray and Charles Holland - who was one of the first two British riders to compete in the Tour de France.

Sergi Escobar, born in Lleida, Spain on this day in 1974, is a Pursuit (individual and team) rider who became National Champion in 2003, 2004 (when he was also National Madison Champion with Antonio Miguel Parra and won two bronze medals at the Olympics), 2006 and 2007 (also National Points Champion). In 2004 he was World Pursuit Champion. Escobar has also had some notably good performances in road racing including a bronze medal at the 2001 National Individual Time Trial Championships, four top 20 stage finishes at the 2005 Giro d'Italia and a silver medal at the 2008 National Road Race Championship for Elite riders without contract.

Ben Jacques-Maynes, born in Berkeley, California on this day in 1978, won the Nature Valley Grand Prix in 2004, Cascade Cycling Classic and Mount Hood Cycling Classic in 2007 and the King of the Mountains at the Tour of Utah in 2012. He currently rides for Bissell which, until the end of 2011, was also home to his identical twin Andy.