Kristin Armstrong
Born in Memphis, Tennessee on this day in 1973, Kristin Armstrong began to compete in long-distance running events whilst studying for her BA in sports physiology at the University of Idaho in the mid-1990s and, having put a great deal of effort into improving her swimming at the Boise YMCA (where she was employed as Director of Aquatics, responsible for fifty lifeguards and other employees), became a successful triathlete. However, in 2001 she was diagnosed with osteoarthritis and advised to give up competitive running, bringing her career as a triathlete to an early end - and pushing her towards her destiny, professional cycling, the sport in which she has become world-famous. Just a year later she finished Stage 9 at the Women's Challenge, the most prestigious event on the US women's racing calendar and, sadly, in its last year due to sponsorship problems.

Two years later, having signed to T-Mobile, Armstrong became National Road Race Champion and was eighth in the road race at the Olympics, and the year after that she won three General Classifications and the individual time trials at the PanAmerican and National Championships, then third in the ITT at the Worlds. In 2006, she became National Champion for road race and time trial, won San Dimas, the Tour of the Gila, the Nature Valley Grand Prix, the Tour de Toona and the Euregio Tour, then became World Time Trial Champion; she kept the National TT title in 2007, won Nature Valley and Toona again and added the General Classification at the famous Holland Ladies' Tour.

Having won the Tour of New Zealand, a third Nature Valley and the Cascade Classic, Armstrong returned to the Olympics in 2008 and won the Time Trial. 2009 was every bit as successful with another Tour of the Gila, a fourth Nature Valley, the Tour de l'Ardeche and, for the second time, the World Time Trial Championship. Then, at the end of the year, she announced that she would be retiring in order to start a family. What the world didn't know was that she was already planning her return: "I love cycling and I love competing. I stopped racing after the 2009 World Championships not because I was burned out, but because my husband and I wanted to start a family. I told myself from the beginning if everything went smoothly with the birth of our son, Lucas William, I would consider racing again,” she said late in 2010; making her return for the 2011 season with Peanut Butter &Co-Twenty12, a team she partly owns and which has since become known as Exergy-Twenty12. Third place at the National Time Trial Championship in 2011 was more than necessary proof that she meant to be every bit as successful as previously - and that motherhood does not have to spell the end of a female athlete's career.

Armstrong is a rider able to keep track of the overall progress of a race while also concentrating on the finest details; by applying the law of marginal gains she has come to specialise in the time trial, a sport in which competitions are often won by fractions of seconds - and regularly wins by tens of seconds. She did precisely that at the 2012 Olympics when she beat World TT Champion Judith Arndt by 15.47", making her the oldest rider to have ever won the gold medal for the event.

She is sometimes incorrectly assumed to be the ex-wife of Lance Armstrong, who was married to Kristin Richard from 1998 to 2003. The two riders are not related to one another. 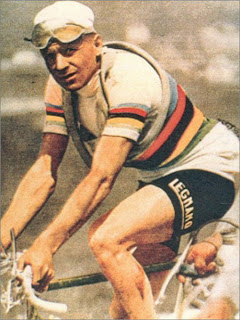 Born in Cittiglio on this day in 1902 but raised in Nice, Alfredo Binda was gifted with enormous natural talent in the mountains. Unlike most other riders of his time, who would concentrate on winning the stages that suited them best, Binda realised that riding to even a minutely higher standard on flat stages would increase his likelihood of winning overall and shaped his training accordingly; becoming perhaps the first real all-rounder.

After turning professional with Nice Sport in 1922, Binda immediately began to win criterium races and, in 1924, the Tour du Sud-Ouest. That brought him a contract with the Italian Legnano-Pirelli team and a place with them at the Giro d'Italia - and he dominated the race, winning Stage 6, achieving podium places in the rest and leading the General Classification from Stage 5 to the end, ending the reign of Costante Girardengo. Earlier that year he'd taken the silver medal at the National Championships, and he ended it by winning the Giro di Lombardia. The next year, he won the Giro di Toscana, the National Championship, Stages 3, 6, 7, 9, 11 and 12 at the Giro d'Italia (but came second overall behind Giovanni Brunero and a second Giro di Lombardia - then in 1927 he won another Giro di Toscana and National Championship, the Six Days of Milan (where he teamed up with Girardengo), every stage except Stages 5 (for which he was second) and 11 and the General Classification at the Giro d'Italia, then the World Championships.

In 1927, Binda led the Giro from start to end - only Girardengo had ever done that, in 1919 when there were five fewer stages. No other rider has accomplished the same feat since.

Joane Somarriba
Euskadi, the Basque Country, has produced a remarkably high number of professional cyclists for a nation with a population of 2.2 million; but few of them have been female. The most prominent of those that have made a name for themselves in Joane Somarriba, who was born in Gernika (Guernica to the Spanish and admirers of Picasso) on this day in 1972.

Somarriba won the Junior National Road Race Championship in 1987 and 1988, then came second in 1989. In 1991 she won the Emakumeen Bira at Elite level, the bronze medal at the National Elite Championships in 1993 and the gold a year later, then the gold in the Time Trials National Championship another year after that. In 1999, after coming second at the Emakumeen Bira, she stood on the podium after five stages at the Giro Donne, including the top step after Stage 10b, and won the event overall.

In 2000, Somarriba went back to the Giro Donne and won Stage 6b, also finishing in the top three on three other stages and winning it for a second time overall; a few months later she also contested the Tour de France Feminine, won Stages 4 and 6, finished in the top three on three others and won overall. This was a major achievement, the women's equivalent to winning the Giro d'Italia and the Tour de France in a single season - something that only seven men have ever done; unlike Somarriba, they are all household names.

Aloïs Catteau, born in Tourcoing, France on this day in 1877 but of Belgian nationality, rode the first ever Tour de France in 1903 and came tenth. He entered again the following year and initially came eighth; however, after an investigation that led to numerous riders being disqualified for cheating, including winner Maurice Garin, he was promoted to third. Catteau also rode the following four Tours, coming 11th, 6th, 9th and 21st. 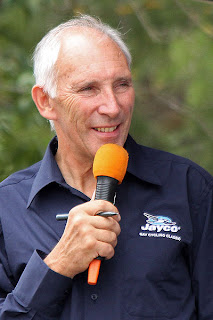 Phil Ligget, born in Merseyside on this day in 1943, was a good enough amateur to be offered a professional contract in 1967. He turned it down, preferring instead to concentrate on becoming a journalist after magazines published his race reports; and he would become a popular writer for the Daily Telegraph, the Guardian and its sister paper the Observer. Between 1972 and 1993 he also served as technical director of the Milk Race, Britain's biggest stage race that would vanish and then be reborn as the modern Tour of Britain, and in 1973 he became the youngest ever UCI international commissaire.

Ligget provides commentary for the Tour de France footage broadcast by Britain's ITV4, the USA's NBC and Australia's SBS alongside Paul Sherwen; together they have become "The Voices of the Tour" for millions of English-speaking fans around the world. Having covered 40 Tours up to 2012, he is well-known for his encyclopedic knowledge of the riders and race history, frequently using unusual and often rather poetic "Liggetisms" to describe them.