In 1938, the start was moved to Argenteuil, but the next year was moved back to Porte Maillot. The winner was Lucien Storme, a Belgian who would win Stage 6a at the Tour de France the following year. During the Second World War, Storme made a living as a smuggler until he was caught and imprisoned by the Nazis in December 1942. He survived through to the 10th of April 1945, reaching the age of 28, when the Siegburg camp was liberated by Allied forces; but was accidentally shot and killed by an American soldier that day.

In 1966, the start was moved to Chantilly where it would remain until 1977. The winner was Felice Gimondi who would become the second rider in history to win all three Grand Tours with his 1968 Vuelta a Espana victory (the first had been Jacques Anquetil when he won the Giro d'Italia in 1964). Gimondi's cycling career had begun in rather less auspicious circumstances - a a child, he would accompany his mother who was employed by the Italian post office and used a bicycle to carry out her deliveries. In time, he became known as a master tactician, his intelligence giving him the ability to compete against the sheer might of Eddy Merckx. In addition to his Grand Tour successes, he made quite a name for himself in the Classics - in addition to Paris-Roubaix, he won Paris-Brussels (1966, 1976), the Giro di Lombardia (1966, 1973) and Milan-San Remo (1974).

1977, when the start moved to Compiègne, saw the historic fourth win by Roger de Vlaeminck; the first - and to date, the only - time a rider has won four editions of the race, and which might never have happened had de Vlaeminck not been persuaded as a teenager to give up his first love football (he was playing for a respected Belgian youth team and, by all accounts, was very good at it) in favour of the bike. That year, the final 0.6km of the Orchies, chemin des Prières, and chemin des Abattoirs cobbled section was used for the first time, the compete 1.7km section being used for the first time (and in the opposite direction) three years later. It was also the first year that the winner was awarded a trophy made from one of the rough-hewn pavé cobblestones that have given the race its unique nature.

1997 was won by Frédéric Guesdon, who had come 11th the year before and to date is the last time that Paris-Roubaix was won by a French rider. Strangely, this would be his last victory for three years until he won a stage in the 2000 Critérium du Dauphiné, as he would again in 2002 before entering another barren period in which he won nothing at all for three-and-a-half years. That his FDJ team kept him on the books throughout both of these stretches is indication of how much cachet a Paris-Roubaix win carries. It paid off - in 2006, he won Paris-Nice.

The Ronde van Vlaanderen has been held just once on this date, in 1965. It was won that year by Jo de Roo, who escaped the peloton on the Valkenberg - Ward Sels gave chase and managed to stay with him, but de Roo crossed the line just before him. The next riders - a group of four including Jean Stablinski and Rik van Looy - were more than half a minute behind them.

La Flèche Wallonne was held on this day in 1975, 1980, 1981, 1985, 1991, 1996 and 2002. 1975 was the 39th edition of the race and, for the second consecutive year, it took place on a 225km loop that began and ended at Verviers. The winner for a second time was André Dierickx, who had also won two years earlier. The 44th edition in 1980 covered 248km between Mons and Spa, with Giuseppe Saronni the fastest on the course - later on in that same year, he would win seven stages and the Points competition at the Giro d'Italia - thus disproving the old stereotype that Italian riders could ride well only in Italy and showing that they could perform to the same high standards at home and abroad. 1981 ran in the other direction, starting at Spa and ending at Mons, but with differences to the route that made it 8km shorter. The winner was Daniel Willems. 1985 saw the 49th edition, which returned to the loop format with a 246km starting and ending at Huy. The winner that year was Claude Criquielion, who very nearly achieved the Ardennes Double a few days later when he was second at Liège-Bastogne-Liège. He won again in 1989. In 1991, the 55th edition ran for the sixth consecutive year between Spa and Huy, following a route that totalled 203km and brought a second victory for Moreno Argentin. The start and finish towns remained the same when the race next fell on this date, the 60th edition in 1996, but the course was slightly shorter at 200.5km. That time, the winner was the relatively unknown young American rider Lance Armstrong, who was going to do quite well in the Tour de France over the next decade. The last time the race was held on this date was the 66th edition which took place on 2002. For the fifth year in a row, it started at Charleroi and ended at Huy, as has been the case ever since, and also covered the same distance of 198km as the previous two years. Winner Mario Aerts had come third in 1999 and fifth in 2000.

The fifth edition of La Flèche Wallonne Féminine also took place on this day in 2002. It was won by Fabiana Luperini - since she had won the first and fourth editions, she equalled the men's multiple victory record.

Today is the earliest anniversary of the first day of a Vuelta a Espana, the race having started on this day in 1984. It covered a total of 3,593km in 21 stages including a prologue and one split stage. Éric Caritoux of Skil-Sem had shown climbing prowess when he was first over the line for a Mont Ventoux summit finish in Paris-Nice earlier in the year, but in his second year as a professional was far from a favourite - however, he proved to be so good in the mountains that even two disastrous time trials couldn't completely obliterate his lead and he beat Alberto Fernández Blanco (who was a favourite) into second place by 6", the shortest winning margin in the history of the Vuelta.


José Serpa, who was born on this day in Corozal, Colombia, won a gold medal for the Individual Time Trial at the 2003 PanAmerican Games, then another for the Road Race in 2006 when he also won  the Individual TT at the Central American and Caribbean Games. From 2006 onwards, he began to develop as a stage race specialist, finishing that year's Tour di Langkawi in 6th place after winning Stages 4 and 5 and won the ITT and Stage 12 at the Vuelta a Venezuela. In 2007, he won Stage 8 and was 2nd overall at Langkawi, then won Stage 5 and the overall Mountains and General Classification two years later. Serpa has yet to make his big breakthrough in cycling's European heartlands, but good results at the Settimana internazionale di Coppi e Bartali (Stage 2, 2010), Settimana Ciclistica Lombarda (Stage 4, 2010) and Giro del Friuli (1st overall, 2011) suggest that, at 33, he may still do so. 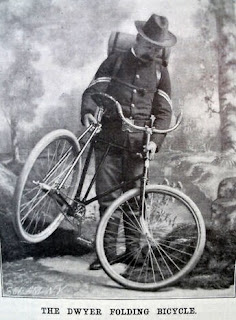 Robert Wagner, born in Germany on this day in 1983, won Stage 8 at the 2005 Thüringen Rundfahrt and then added good results at numerous races before signing with Leopard Trek for 2011, the year he won the National Road Race Championship. He will ride in 2012 with the new Radioshack-Nissan-Trek formed by the merger of Leopard Trek and Radioshack.

On this day in 1894, American inventor Michael B. Ryan was issued with a US patent for "a bicycle, so constructed that it can be easily folded and thus take up less space in length when not in use or when transported or stored." Three years later, he submitted an improved model and is the likely designer behind the Dwyer Folding Bicycle which, having found a major backer in the shape of the US Army, exhibited a bike fitted with "Ryan Folding Handlebars" (the patent for these has been located and turns out to be that same Michael B. Ryan) which was critically acclaimed and - while far too late to be the first folding bike - was the first that proved successful.

Sigrid Corneo, a Slovakian rider who was born in Italy on this day in 1970, won Stage 2 at the Tour Féminin en Limousin in 2007 and was 2nd in the National Road Race and Time Trial Championships in 2010.

The Camelford Cycle Museum in Cornwall opened its doors for the first time on this day in 1992. With a collection of more than 400 bikes, some considered innovative when built, a similar number of antique advertising signs and more ephemera  than can be imagined, the museum was very much worth a visit - sadly it closed in 2009 and the entire collection was sold, going to a new owner overseas.

On this day in 1947, Mercian Frame No. M1146 was sold. Nobody knows if it still exists, but it's the earliest documented Mercian frame.