Last Gelderland?
Organisers of the Ronde van Gelderland are threatening to make the 2012 edition - which took place yesterday - the last  due to their anger that some of the top names in the sport chose not to take part. "We conceived this race to be the top competition for women, a premium race for the top riders," they say. "But how do you sell it as the number one women's cycling event when Dutch champion Marianne Vos isn't here here for the third year in a row? Also Annemiek van Vleuten was not here, so the race becomes less interesting."

Jeroen Blijlevens, manager of Vos and van Vleuten's Rabobank team, responded: "Everyone always wants Marianne, but with the Olympics and the Worlds in Limburg we have had to make different choices. For the media and public, she is such an important part of the sport it becomes a problem for organisers if she's not in their race - but she can't enter every race, and she's training in preparation for la Fleche Wallonne. Annemiek van Vleuten, meanwhile, is recovering from major surgery and simply can't be overburdened."

Blijlevens is right - Vos, arguably the most successful rider in cycling for at least two decades, has a public profile of which most female riders can only dream and a fan base at least equal to that of the top male riders. However, if they're concerned that their race is boring, organisers would presumably be better off looking at what they can do to improve matters rather than simply laying blame at the feet of one team and two of its riders. (More from Wielerland) 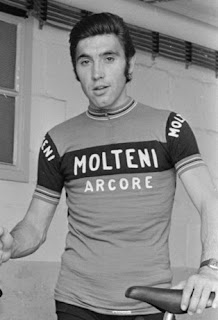 Merckx speaks out on new biographies and doping
Eddy Merckx, winner of 525 races in the course of his uniquely successful career, seems unimpressed by recent biographies of his own life and career: "If they’re writing a book about me, maybe they should talk to me, no?" However, in one of the books ("Eddy Merckx - The Cannibal," Ebury Press) author Daniel Friebe states that he requested an interview with the retired Belgian rider and was refused, the rider and his wife Claudine explaining that they are "contractually obliged to their own, official project."

Merckx, who tested positive three times (one in extremely questionable circumstances) still insists that he was not a doper. "I was clean, I know that," he says, also stating that he believes cycling is now 95% clean and insists that the only reason he can't say 100% - despite "doping controls day to day" - is because "no sport is clean." He goes on to defend seven-time Tour de France winner Lance Armstrong, whom he believes is also innocent. "I don’t think people that have cancer like he did would ever do something so silly. I think that it would be crazy," he says, adding that in his opinion the reason Armstrong has faced so many accusations is because "when you are at the top, people are jealous of you and that’s a big part of this also." (More from the Evening Standard)

Provisional ban as Galimzyanov tests positive for EPO
Katusha's Denis Galimzyanov has been provisionally suspended from competition after a sample he provided tested positive for EPO. The UCI released a press statement this morning saying that they reached the decision to ban him after a WADA-accredited laboratory in Cologne carried out the test.

"The provisional suspension of Mr Galimzyanov remains in force until a hearing panel convened by the Russian Cycling Federation determines whether he has committed an anti-doping rule violation under Article 21 of the UCI Anti-Doping Rules," the statement says. "Mr Galimzyanov has the right to request and attend the analysis of his B sample. Under the World Anti-Doping Code and the UCI Anti-Doping Rules, the UCI is unable to provide any additional information at this time."

Galmizyanov's ban will raise awkward questions for Katusha, which has already faced attacks over its record on doping despite new manager Hans-Michael Holczer's much-vaunted zero-tolerance policy. Chief doctor, Andrei Mikhailov, received a suspended prison sentence for doping offences in 1998; while another team medic Massimo Besnati was prosecuted for illegal possession of steroids in the wake of the notorious Le Blitz du Giro in 2001 when police raided team hotels. The team was again raided by Italian police in 2011.

New Scottish sportive to honour Robert Millar
"I'm sure if you stopped most people in the street and asked them who Robert Millar is, most Glaswegians wouldn't know," says David Lang, captain of Millar's old club the Glasgow Wheelers. With help from Endura Racing manager Bill Smith and Billy Bilsland, who coached Millar in the early days, he hopes to change that with a new sportive named in honour of the man he calls "definitely the best stage rider that Britain has ever produced." Millar has been approached in the past for permission for his name to be used in conjunction with cycling races but, an extremely private man who has all but withdrawn from the media world, has in the past refused. The sportive will offer two routes, one of 45 miles and one of 90 miles (72.5km and 145km), running through the Trossachs National Park and the Campsie Fells mountains north of Millar's native Glasgow. (More from BBC Sport)

Other Racing News
"I still can't believe it!"
...says Astana's Enrico Gasparotto after his surprise Amstel Gold Race victory against some of the best one-day racersin the world. The 30-year-old, National Champion in 2005 and Points competition winner at the 2009 Tour de Suisse, attributes his triumph to close friend Luca Paolini of Katusha - "He taught me how to race," he says. (More from La Gazzetta dello Sport)

Cycling
New Australian bike security system
Police in Victoria, Australia, have given their backing to a new bike security device that works by reading a QR code affixed to the frame - and which can also give access to information on the rider's blood type and other information, making the system useful to paramedics too.

"As police, if we find a bike they all look the same to us," says crime prevention officer Craig McDonald. "The first time people see it they think it is just a sticker. After three days you can only burn them off or then grind them off," he adds. For Aus$30 a year, the bike's owner is supplied with three of the stickers which can then be read by a QR scanner to gain access to a webpage with information on the bike, its registered owner and so on. At present, police nor paramedics are equipped with the scanners, but many smartphones have the capability.

The system, called mybikerego, is due to be improved with the addition of a GPS chip that can be hidden in the bike's frame and which will send SMS messages to the owner's mobile phone if the bike is moved. (More from The Register)
Posted by john_orbea at 13:51