The Ronde van Vlaanderen was held on this day in 1924, the year that the race was won for the first time by Gerard Debaets who would win again in 1927 to become the first man to two victories and had also been the fastest Independent (semi-professional riders who were responsible for paying for their own food and board) at the 1923 edition. He took 10h00'19" to win against a very strong field that included 2nd place René Vermandel (winner in 1921), 3rd place Félix Sellier who had won a remarkable stage as an Independent at the 1921 Tour de France and would win Paris-Roubaix in 1925, 5th place Jules Vanhevel who had won in 1920, 6th place Nicolas Frantz who won the Tour de France in 1927 and 1928 and held the Luxembourg National Championship for twelve years, 7th place Denis Verschueren who won in 1927 and 8th place Maurice De Waele who won the Tour de France in 1929. 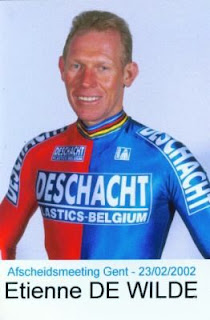 Belgian Etienne de Wilde was born in Wetteren, East Flanders on this day in 1958. he won Stage 12 at the 1980 Vuelta a Espana, the Dwars door Vlaanderen in 1983, the Nation Road Rae Championship in 1988 and Stage 7 at the 1989 Tour de France and Stage 3 in 1991 along with many other road races; but was also the National Omnium Champion for 1986 and 1988, the European Omnium Champion for 1989, the World Points Champion for 1993, World Madison Champion in 1998 (with Matthew Gilmore) and European Madison Champion in 2000 and 2001 (again with Matthew Gilmore) he is remembered primarily for his track success.

Chris Hoy
Chris Hoy was born in Edinburgh on this day in 1975 and, as well as being the first British athlete to win three Olympic gold medals in a single year since 1908 (Henry Taylor the swimmer, fact fans!), is the most successful Olympic cyclist of all time.

Unusually, Hoy was first inspired to take up cycling by the film E.T. the Extra-Terrestrial - if any other professional cyclists were, they're not admitting it. As a result, be began racing BMX when he was 7 and would be ranked 2nd best in Britain, 5th best in Europe and 9th in the world. He took up rowing while at university and joined the Dunedin CC in 1992. Two years later, he joined the City of Edinburgh Racing Club and began to concentrate on track racing. Hoy's large and muscular build (he's 185cm tall and weighs 92kg) made him a natural for events requiring explosive acceleration and high-speed sprints, so in the early days if his career he specialised in 1000m time trials and team time trials, usually taking the third position in the team so that he would be the one to sprint over the line. He would be rated the best 1000, time trial rider in the world before the event was dropped from the Olympics after 2004 (when he won his first gold), when he began training for other events.

Hoy's medals to date include nine gold, six silver and five bronze in World Championships, four gold and one silver at the Olympics and two gold and two bronze at the Commonwealth Games. He was selected as the BBC Scotland Sports Personality of the Year in 2003 and 2008, the the BBC Sports Personality of the Year in 2008 - he was the first cyclist to win the award since Tom Simpson in 1965. He has also been awarded an MBE, thus becoming Sir Chris Hoy (but here at Cyclopunk, we don't observe such archaic traditions and so prefer to call his Chris Hoy) and is a Knight Bachelor. There is a velodrome in Glasgow and a train operated by SouthEastern railways named after him.


Michela Fanini was born in Lucca, Italy on this day in 1973 and came from a cycling family: her grandfather was a frame builder of considerable repute, her grandmother a noted professional cyclist and her father is a race organiser. She won the National Road Race Championship in 1992, then left the 1993 with a silver medal before winning the 1994 Giro Donne. On the 16th of October that year, while attending a training camp, a car in which she was travelling was in an accident and she was killed at the age of 21. The Giro di Toscana-Memorial Michela Fanini race and SC Michela Fanini racing team are named in her honour.

Hossein Askari, born in Khomein, Iran on this day in 1975, won his National Individual Time Trial Championships in 2007, 2008, 2010 and 2011. He also won the General Classification at the Tour of Indonesia in 2005, the Azerbaijan Tour in 2007 and 2008, the UAE International Emirates Post Tour in 2008 and the President Tour of Iran and the Tour of Qinghai Lake in 2010. Now aged 37, he continues to ride for the Tabriz Petrochemical Team, one of the most respected on the Middle Eastern and Asian cycling scenes.

Danny Pate, born in Colorado Springs on this day in 1979, was Junior National Cyclo Cross Champion in 1997, Under-23 National Road Race Champion in 1998 and Under-23 World Time Trial Champion in 2001. He was 3rd in Stage 15 at the 2008 Tour de France, then 3rd in Stage 18 at the Giro d'Italia and in the overall General Classification of the Critérium International in 2009. For 2012, he will ride with the British-based Team Sky.

Óscar Vargas, born on this day in 1964 in Urrao, Columbia, was professional between 1985 and 1985. In 1989, he came 3rd in the General Classification and won the King of the Mountains at the Vuelta a Espana.

Damian McDonald was an Australian cyclist born on the 12th of May 1972 who won a gold medal in the 2004 Commonwealth Games. He died on this day in 2007 in the Burnley Tunnel Explosion that occurred after a crash and fire in the Melbourne tunnel.

On this day in 1975, tandem cyclists Veronica and Colin Scargill completed their 29,000km trip around the world.

On this day in 2011, seven Estonian cyclists were kidnapped by an armed criminal group shortly after crossing the border from Syria into Lebanon. There are many theories as to who the group were, ranging from an anti-Israeli group responding to the arrest of Palestinian engineer and suspected manufacturer of Hamas' Qassam rockets Dirar Abu Seesi a few weeks earlier to a local drugs gang hoping to make money by ransoming them. Following their release 113 days later, the cyclists described the captors as "Islamic extremists with Kalashnikovs" and said that the men had demanded to know if they were either Jewish or Danish. When released, they were underweight but otherwise in good health.