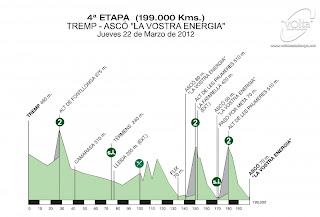 Stage 3 at the world's third oldest stage race proved rather unsuccessful with six riders failing to start, 33 failing to finish (full list at the bottom of this article) and 55km lopped off the end by organisers due to heavy snowfall on the Hors Categorie climbs - a pity, as it had the makings of a spectacular Queen Stage.

Stage 4 looked far more likely to go ahead as planned - there were climbs, but with the highest point (Alt de Fontllonga, 675m) along the 199km parcours almost 1,300m lower than Stage 3's Port Aine summit finish there was little chance of the riders not reaching the finish line as planned today. While the terrain was lower, the stage was by no means easy: there were three Category 2 climbs and a number of short but steep hills in between them. Fontllonga was the first categorised climb, beginning 20km into the race, then there were a couple of uncategorised ascents right after the feed station at 100km and two ascents of the Alt de Les Paumeres in the final 60km; the road taking the same way up but varying on the way back down.

An six-rider break made the most of it, trying their hardest to keep a good lead over the hills - and they very nearly embarrassed the pack, too, the majority of them evading capture until the final 400m. Three riders had other ideas: Rigoberto Uran (Sky), Denis Menchov (Katusha) and Sylvester Szmyd (Liquigas-Cannondale) decided they hadn't quite finished having fun and launched themselves up the road to the line. In turned out that Uran (one of Cyclopunk's top tips today, no less!)  was the quickest and he won the stage, Menchov crossing close him behind and Szmyd taking third. (Stage results / GC)

Interestingly and despite riding for rival teams, Uran and Menchov train together as both have homes in Pamplona - a fact that was Uran's mind as they battled one another over the line. "I was thinking that if he beats me, I won't buy him any more coffees," he told reporters after the race.

As predicted, GreenEDGE's tactics were noticeably different today: with Michael Albasini remaining race leader this morning after the judges' decision not to count Stage 3 towards the overall results, the Swiss rider unexpectedly retained the race leadership; so the team is now concentrating on keeping him a good rate of knots through the rest of the race. It worked today, leaving him with a 1'32" over second place Steve Morabito of BMC. With so many of the favourites no longer in the race after yesterday there are many lesser-known riders with a massive increased chance of winning, so right now when there are three stages left it's too early to predict the eventual outcome. However, if GreenEDGE continue to work together to protect their new champion, Albasini may well prove to be the man. (Map)

Julian Dean,  Jakob Fuglsang, Wilco Kelderman injured
In addition to the 33 riders to abandon during Stage 3, Julian Dean (GeenEDGE) and Jakob Fuglsang were absent from the start line this morning. Dean, in his first race after recovering from a broken shoulder, had swerved to avoid a crash caused when several riders slipped on the icy road ahead of him and collided with a stationary car, breaking his leg. "We are especially distraught about this loss," says Neil Stephens on the team's official website. "From a sporting perspective, it’s terrible to lose a rider to a crash. From a personal perspective, we really feel for him. He has a lot of bad luck this year." Meanwhile, RadioShack-Nissan's Jakob Fuglsang sustained a broken hand and also misses the rest of the race - not a good birthday present for the Danish rider who turns 27 today. Wilco Kelderman - who crashed during Stage 4 and was taken to hospital with a bleeding wound above his eye - suffered only minor cuts and bruises, Rabobank have confirmed.

The GP Ciudad de Valladolid, due to have taken place on the 3rd of June this year, has been suspended by race organisers. No reason has been given, but with several races - including several other Spanish races as Spain's economy is in a poor state - experiencing difficulties in finding sponsors, it's likely that financial difficulties are the cause.

The race, first held in 2010 when it was won by Charlotte Becker, formed part of the UCI Women's World Cup, its demise reducing the number of events in the series to eight - the lowest since 2000. With numerous other women's races such as the Holland Ladies' Tour experiencing problems this year, the announcement is likely to lead to further calls that the UCI allocate more funds in order to protect and develop the women's sport, especially after recent reports showing that cycling is in overall good financial health.

Or that's what manager Michael Zijlaard thinks, anyway.  "Marianne Vos is very strong and hard to beat, but you have to try it, " he told his AA Drink-Leontian.nl riders as part of a pep talk. "Her team is weaker than people think, so you should try to isolate her quickly."

In fact, that's a tactic many believe may work. Vos, at 24 years old, has emerged as one of the strongest riders the sport has ever seen and dominates women's cycling; but rivals noted that she was weakened without her team around her at the recent Ronde van Drenthe. "I know you will not beat Vos very often, but I do think you should try," he added. "But don't let her lead you to the slaughter - if you, you know what happens."

However, Vos relishes competition; so much so that Rabobank claimed in January that it was considering entering her into a few men's races to prevent her becoming bored. She can also change her plans during a race according to conditions and has won many a race on her own. Whether it does work remains to be seen.

Jeannie Longo to ride at the Olympics?

If anyone ever drops a nuclear bomb in France, two species are sure to survive: cockroaches and Jeannie Longo. Right after a scandal in which she failed to notify the UCI's doping control officials of her whereabouts on two occasions, missed one test entirely and, most damning of all, her husband and trainer first confessed to purchasing and was then charged with trafficking EPO after police raided their home earlier this year, the 53-year-old current National Time Trial champion has made it onto the French pre-selection list for this year's Olympic Games.

Spokesperson Isabelle Gautheron says that Longo - who has been a National Champion 59 times - completed and returned all the paperwork sent out by the Fédération Française de Cyclisme. "Longo should not be penalised," she told L'Equipe, "it [the doping case] is her husband'sproblem. He has been indicted for the purchase of drugs, for personal use from what I read in the press. Longo needs to try to go the Olympics. She is a competitor and will fight."

If Longo gets to London, it will be her eight time at the Games. When she competed in 2008, she lost to Nicole Cooke, who was one year old when Longo first took part 28 years ago in 1984.

WorldTour Verity @UCI_WorldTourFDJ in the end found the shovels they were looking for according to race fan! #voltacatalunya (Pic)