Back in June 2011, I wrote a review of what seemed to me to be the cheapest "proper" road bike money could buy. That bike was the Carrera Virtuoso, retailing in your local Halford's for the princely sum of £379.99 - and I was pleasantly surprised, because it proved to be a considerably better machine than I'd believed it could possibly be. In fact, apart from a few cheapo components here and there, the only bad thing I could really say about it was that it was ugly; which I still stand by because it was.

The other day, when I locked my old shopper bike up outside the local purveyor of ferret food, rather a nice-looking white and ice-blue aluminium bike happened to catch my eye. "Wossat?" I thought, before moving in for a closer look. Lo and behold, it turned out to be a 2012 Virtuoso - and it really is a far prettier beast than the 2011 model. In its older guise with black and blue paintwork the Virtuoso looked rather old-fashioned, reminding me of a budget racer from the early 1990s, which wasn't a real issue, of course, and may even have been a selling point for some people. After all, some people have no taste: I saw someone wearing those hideous denim-effect cycling shorts last week. The 2012 model, however, looks as up-to-date as next year's summer fashions - the glossy white and blue gives the impression of a considerably pricier bike, but it's still only £379.99 You can tell a lot about the quality of the paintwork by close examination of the lower end of the down tube, where stones flicked up by the front wheel tend to make contact with the frame - as I knelt down to have a look, I became aware of a hulking presence leaning over me.

The bike's owner. Who, one glance told me, was a lot harder than me (as are five-year-olds, and the majority of sparrows). Fortunately, he only looked like a thug and was equipped with a fully-functioning brain; as such he had realised that I was looking at his bike rather than nicking it and thus with-held from killing me pending an explanation. When I told him I'd reviewed an earlier model he seemed quite impressed, possibly because I failed to mention the review was for a blog rather than for a magazine, and once I'd handed over anything of worth as a deposit (wallet and contents, value not much; half a packet of Polos, value about twice that of my wallet and its contents) he agreed I could have a go round the car park on it. 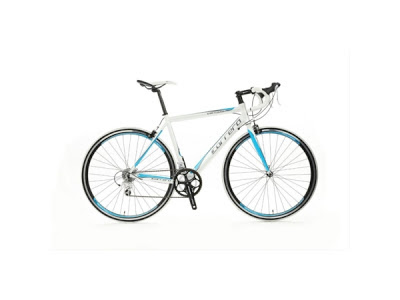 The 2011 Virtuoso's frame was made of 7005 aluminium alloy, which they advertised as light-weight - the real reason it was chosen is more likely to be the relative ease with which it can be welded in Carrera-manufacturer Merida's Taiwanese factories, thus keeping production costs low. The 2012 frame has been upgraded: your money now gets you 6061, which has a lower density and is lighter as a result - yet the claimed weight of the 2012 bike is 700g greater than that of the 2011 bike at 11.2kg, which I suspect is due to the replacement of the older machine's Kalloy components with unbranded versions. However, nobody's going to enter an official race on a Virtuoso and 700g isn't really a problem; what matters more is that the new model is stiffer, meaning that it can hold its own in an unofficial traffic light drag race against the 125cc scooters - probably the only sort of race the bike will see. This has been achieved partly by the addition of an internal headet (the 2011 bike had an external headset) and largely by a much better fork - the curved 2011 version has been replaced with a more up-to-date straight-bladed effort. It's cromoly (you didn't think it'd be carbon at this price, surely?), but again the weight compared to carbon won't be an issue for most riders. The frame geometry has received some little tweaks here and there, too: Halfords called the 2011 Virtuoso semi-compact, this one is compact. All in all, it works - this bike is a genuine pleasure to ride, mimicking more costly machines in its responsiveness and ability to track through a tight corner, and not as sluggishly as you'd expect.

Some of the components have been upgraded, too. Gone is the old Pro Wheel Gloria Compact chainset, in its place is a square taper FSA Tempo with 50/34 rings, just like you get on a Giant Defy 4 and several other bikes that cost £200 more than this one does. Last year, Halfords were keeping quiet about the mechs; this year you've got a Shimano FD-2300 up at a front while a Sora handles the chain at the back. The brake and gear levers are STI 2300 - many riders find these make it difficult to change gear when riding on the drops, but it's something most people can learn to live with. On a bike as new as the test subject - a month, the owner told me - everything was working crisply, but as tends to be the way with budget groupsets the mechs and shifters are going to need looking after. Halfords offer a free service after six weeks; if you're new to cycling ask the shop mechanic if he or she will show you how to adjust the cable tension and derailleurs, then you should be able to keep everything working smoothly without any problems. The brakes are workable Tektro jobs and do what they're supposed to do; the 8-speed cassette is 12-26 and should be capable of getting you up any hill you put in front of the bike for a year or so, which is perfectly acceptable for a budget component.

As with the older models, the cheap plastic pedals and toe clips are a let-down. However, most Virtuosos are likely to be purchased by people new to road cycling and the one thing you'll hear again and again from people in that category is that they were surprised they needed to fork out for a pair of pedals when first buying a bike. Also, many new-comers are put off by clipless pedals; Halfords have therefore stuck these ones on in the full knowledge that serious riders will probably upgrade them to clipless before too long. The saddle - Carrera-branded - is cheap and a little too flexible but comfortable enough - some riders will swap for a fatter seat, mistakenly believing it will offer greater comfort, while those with a bit of nous will swap for their preferred racing/touring model. With that in mind the fact that it's cheap becomes an advantage -  it won't break your heart if you decide to get rid of it. Since many quality wheelsets cost more than this bike the wheels are unbranded and heavy as you'd expect, but they feel as though they'll do their job unless you hit a pothole at high speed. Cheap replacements would be my second upgrade and doing so might well make the bike lighter than the 2011 model. First upgrade for me after the pedals would have to be the tyres: Kenda make some top-quality rubber, but these are far from their finest offering - they look to be the same as those on the 2011 bike, which some riders complained rolled off the rims.

Summing up: the 2012 Carrera Virtuoso will never hold its own when pitted against exotica and it would be unfair to expect it to do so - after all, the complete bike costs less than some derailleurs - but for £380 it's a very good buy indeed. Many people dislike Halfords, but if they can build a bike like this at this price then they're doing something right. Upgrade the components when necessary and, so long as you can out up with stupid people telling you your bike's rubbish, the Virtuoso isn't a bad bike at all. Taking the price into consideration, I'll give it eight out of ten.

Buy this bike if: you watched Wiggo win the Tour and fancy giving this cycling lark a go but aren't certain you'll stick with it for long (hey, if you decide it's for you you can always buy a more expensive bike later); you want a cheap, fast, light commuter that'll get you to work with far less effort than a cheap MTB and be up for some leisurely jaunts if the sun's out on the way home; you want a cheap and cheerful winter bike - there's plenty of room between the fork blades and stays for a 25mm tyre, but be prepared to carry out regular services on the brakes and gears in bad weather.
Posted by john_orbea at 13:54