Super expensive, but worth every penny 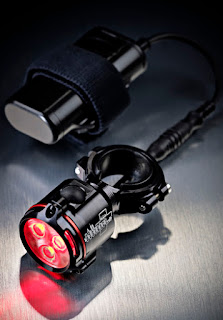 It's been a good few years since LEDs revolutionised bike lights. Rear lights were first to get the LED treatment, instantly transforming from chunky plastic boxes fitted with heavy D cells (which usually leaked sooner or later) and dim conventional bulbs (which stopped working as soon as you crashed) to smart, light weight, AA-powered devices that worked for ages. Front lights were initially held back due to the cost of white LEDs; then cheaper versions became available and every bike accessory manufacturer under the sun got carried away with making ever-more advanced versions. As a result, rear LED lights were forgotten until 2010 when Hope introduced their District model, a light that featured the same level of technology as the best front lights on the market and immediately found fans despite the high price. Now, the District has been updated for 2013.

Straight out of the box, the District is a tasty piece of kit: its 248g (with battery) weight - heavy, but not too heavy - combines with compact proportions and intriguing shape to give it a pleasing heft. It's also very good looking in an industrial, purposeful way with its robust CNC-milled aluminium housing and allen bolt-fastened clips which will ensure it stays fixed securely to your bike. I spent five minutes just admiring the thing before even plugging it into the battery (speaking of which, Hope have seen to it that you get a choice in the battery department. You can either use a wire splitter to power it from the battery unit of various Hope front lights or from an independent battery pack compact enough to be hidden away under the saddle, meaning the light can still be used if you're running a front light made by someone else or want to use this one as a safety light during daylight. Which is nice.)

Then I plugged it in. Whilst looking directly into it. A week later, my retinas are returning to normal function - this thing is bright. So much so that I swear it works as a photon drive with so much light being chucked out of the back of the bike it actually makes me a bit faster, and if anyone claims not to have seen you with a District on yer bike there isn't a court in the land that'd take their side. There are only three LEDs in there, but they're not your common-or-garden type as found in the various rear lights with ten or more LEDs: Hope have chosen Osram Oslon LEDs as used in modern car rear lights and - Google tells me - deep mine illumination, with their surprisingly low power requirements the battery lasted for ten or so hours on high setting and more than a hundred in flash mode (and if the supplied 2600mAh battery isn't enough for you the District is compatible with 5200mAh packs too). They also have a superb lifespan of around 50,000 hours, or nearly six years of constant use - bearing in mind that many other quality rear lights cost about a sixth as much as a District but tend to last only a year or so, the District's price doesn't look quite so off-putting after all. With that superb casing, you can be certain that the rest of the light will last too.

A few reviewers have stated that they found it fiddly to fasten the District to the seatpost (three shims are provided, allowing it to be fitted to any round-profile post. It won't fit aero-profile posts, though it ought to be a reasonably easy job to fashion a clamp to fit it elsewhere on the bike), but I disagree with that and had it bolted in place within two minutes; finding it no harder than fitting any other light. Once the clamp's in place it won't be going anywhere in a hurry and so it's fortunate that the light housing can be quickly and easily removed from the clamp by way of a reliable quick release bayonet fitting, preventing passing scumbags from nicking it.

Summing up: £144 (cheapest offer for the District plus battery pack and charger; light plus battery is around £20 cheaper while the light with splitter is £86. Not that I care - I got mine for Christmas) is a lot of money for a light, but you get a lot of light - in fact, this is almost certainly the best light currently available. Extra points for the large rubber on/off switch, easy to find and operate on the fly even with gloved hands.