One of the greatest non-classic events of Italian cycling and now in its 36th edition, the Trofeo Internazionale Bastianelli takes place on hilly roads north of Atina in Lazio - a beautiful hilltop town which, despite its Roman ruins, cathedral and ducal palace, hasn't yet been discovered by tourists and where the majority of the local population make their living through the production of wine and olive oil.

The race takes place in three parts: Giro 1 (blue) heads at first west, then north into the countryside and west again to Alvito, then turns north-west to loop around Posta Fibreno - which has a lake made famous by a naturally-formed floating island, mentioned by Pliny. The riders then head south-east to Casalvieri and Casalattico, then after 55km arrive back at Atina to begin the next part.

Giro 2 (red) leaves Atina and heads at first west, then north via Settefrati to San Donato Val di Comino, west again to Alvito and south via Casalvieri to Casalattico before turning east back to Atina, covering 62km.

Giro 3 is itself split into three parts, two laps beginning and ending at the start line and a third, slightly shorter lap ending at San Marciano. The total distance is 143km. 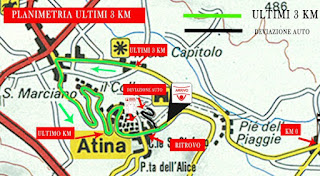 A look at the altitude profile reveals that this is not a race for the sprinters, with numerous tough climbs dotting the entire parcours and three big GPMs coming in fast succession between 67 and 85km during Giro 2. The first of these is Gallinaro, its highest point 555m above sea level and situated 71km into the race; the second is Settefrati (79km), the biggest test the riders face today at 825m; the third is San Donato Val di Comino at 85km, 728m high - the profile suggests that the town is approached by a descent; however, while the riders will have been descending from Settefrati, there's a steep climb to reach the centre of the town. Giro 2 ends with a climb of 130m which must then be climbed three more times during Giro 3, draining the last dregs of strength from all the riders and ensuring that only the strongest climbers stand any real chance of being first across the finish line after they climb it for the final time.

Results when available...
Posted by john_orbea at 12:28