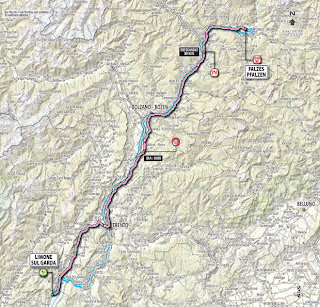 The Giro heads for Limone sul Garda for 2012's final medium mountain stage on Tuesday, taking a 173km route that ends at Falzes - which, despite being in Italy, is better known as Pfalzen since it's 20km from the Austrian border and around 97% of the local population speak German as their first language.

Limone sul Garda feels far more Italian; it's famous for its locally-produced olive oil and lemons (although grown here in large amounts, lemons did not give the town its name - "limone" is probably derived from limes, meaning bounday, or lemos, meaning elm). Until the 1930s, the town was largely cut off from the outside world with the only ways to get there being by boat across Lake Garda or via the difficult passes across the mountains. This proved advantageous to the locals: a 17th Century inhabitant named Giovanni Pomaroli added to the Limone gene pool a mutant blood apolipoprotein, which enables the liver to produce a greater amount of high-density lipoprotein and reduces heart disease. Pomaroli's descendents, in the time-honoured way of mountain towns that have no contact with the outside world and little for people to do for several months each year, set about passing on their mutant genes and now Limone's residents are famous for their longevity. It has become famous as a health resort, attracting the rich and famous and benefiting enormously from their spending - what must have been a poor, one-horse town within living memory is now an impressive place of grand villas built along the thin strips of flat land between the lake and the mountains. 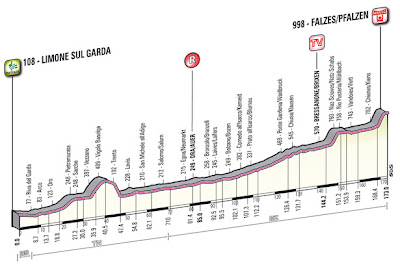 The stage's first two climbs come just before Trento, neither is especially high nor steep and, as such, neither is categorised. The summit of the second is 489m above sea level and is followed by a 7km into the city

Trento is also rich - in fact, it frequently makes it into Italian top ten quality of life lists and its university is often ranked best in the country. The local architecture is exactly what might be expected of a town pulled between Italian and German influences; buildings that look quintessentially Italian stand next to others that wouldn't look out of place in Bavaria, while others happily combine elements of both traditions - and usually do so successfully. Trento's most famous son (who was in fact born 10km away at Palu Giovo) is Francesco Moser, who broke Eddy Merckx's Hour Record and smashed the old stereotype that Italians couldn't ride well in the Northern Classics. Palu Giovo is also the birthplace of Gilberto Simoni, who won the Giro d'Italia in 2001 and 2003 and might well have won in the intervening year too had he - like Moser - not preferred to ride with a little chemical assistance: a positive test for cocaine saw him kicked out of the race, though the Italian Federation later cleared him. Trento's finest site is the Castello del Buonconsiglio, the seat of the local Bishopric for half a millennium after construction began in the 13th Century, then a barracks and a prison when the Austrians ruled this part of Italy and since the 1920s a museum. Much enlarged over the years, it has become a vast complex of towers and palaces.

Bolzano, around 60km from Trento, is the next town of any size - in fact, it's the largest city in the South Tyrol. It too was subject to German influence and is still sometimes known as Bozen despite extensive "Italianisation" under Mussolini and the Fascists. Now, around three quarters of the population speak Italian as their first language; the majority of the remainder speak German and a tiny minority speak Ladin, a language closely related to Swiss Romansch and spoken by fewer that 20,000 people in total. The Fascists left another legacy - the city was once home to the Polizei- und Durchgangslager Bozen transit and labour camp, where thousands of Jewish and political prisoners were kept under appalling conditions during the Nazi era. This is perhaps why today Bolzano exhibits such tolerance: a unique statute preserves the identity of the German-speaking minority whilst integrating them in society, a measure that has been hailed as a potential solution to inter-ethnic conflict in other parts of the world and which has been praised by the Dalai Lama who has visited the city many times and advocates the same system for Chinese-controlled Tibet.

After Bolzano, the route begins to climb, imperceptibly at first, then more steeply until it reaches Ponte Gardena, an attractive and extremely Tyrolian village of 192 inhabitants that once had a statue of Mussolini on horseback entitled The Genius of Fascism, which was somehow overlooked after the Second World War and stood until the 29th of January 1960 when it was destroyed by the Bergisel-Bund für Südtirol Schutzverband group (who were, unfortunately, rather among the terrorist category of political groups). Trostburg, a 12th Century castle, is a considerably more attractive landmark. The parcours then crosses a plateau at 545m above sea level, then reaches a steeper ascent just past Brixen (where remnants of the 11th Century town walls and several castles can be seen) and climbs to 760m. A second plateau leads to Kiens at 168.1km, then the riders reach the last climb and get to 980m at the final right hand bend. The remaining 2.35km rise slightly to a maximum of 1,004m at the beginning of the last 0.5km, then the parcours descends gently to the finish line. If there was ever a stage for Joaquim Rodriguez, this is it. 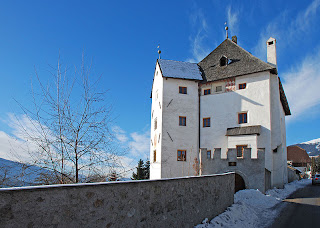 Falzes - or Pfalzen - is around 50km from Bolzanoa the crow flies but more like 71km on the road. It's a region rather than a village and includes the hamlets Issing and Greinwalden. The former is home to the Burg Schöneck, a 12th Century castle that is now a private residence and, when glimpsed from the nearby roads, can be mistaken for a large church. Nearby is Sichelburg, a tall and imposing fortified manor house thought to have once been the home of the local lords. The building has undergone extensive renovation in recent years and has been returned to its former grandeur.
Posted by john_orbea at 12:27