The next two years, which might have brought his Grand Tour victory, were marked by bad luck. He was forced to abandon the Giro during Stage 3 following a crash (the same had happened, on the same stage, in 2009); then skidded on a patch of oil left by a film crew's motorbike and broke two ribs at the Tour. Still racing with the same team - by then renamed Garmin-Cervélo and now Garim-Barracuda - Vande Velde's 2011 results, including 17th at the Tour, suggest that while his best years may be gone he remains a very capable rider.


Jean-Christophe Péraud, born in Toulouse in this day in 1977, was a mountain biker who won a cross-country silver medal for France in the 2008 Olympics. One year later he surprised the cycling world by winning the National Time Trial Championship and suddenly turned out to be a first-rate road cyclist - in 2010, he took ninth place at Paris-Nice, then fourth in the Tour of the Basque Country; and a year later he was second at the Tour Méditerranéen, sixth at both Paris-Nice and the Critérium International and ninth at the Tour de France. 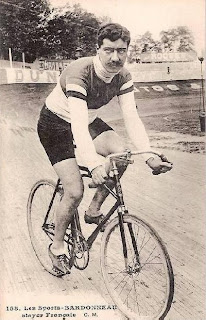