Racing
Tour di Romandie gets underway with a good day for Sky
The Tour di Romandie started today with a 3.34km individual time trial in the ancient Swiss city Lausanne, running partly along the Quai d'Ouchy and Quai de Belgique on the banks of Lake Geneva - one of the most beautiful city roads in Europe.

Rain had been coming and going throughout the morning before the first riders set out on the course, the first third or so getting a slight advantage from relatively dry conditions before it began drizzling again. Sky's Geraint Thomas looked like a probable winner when he set a time of 3'29" - team mate Mark Cavendish had ridden the course with him this morning and was predicting victory...


...and, when the rain turned heavier shortly after he'd clcked in, nobody was able to beat him; though RadioShack-Nissan's Giacomo Nizzolo came close with +4", as did Cav with +5" - which brought about an amusing change of heart from the English commentators who dismissed the Manxman's chances almost as soon as he'd left the ramp. Bradley Wiggins' chances were severely curtailed by the weather and he finished just outside the top ten after recording 3'38" for 11th place. However, with Michael Rogers equalling Cav's time for 4th, it was a very good day for Sky indeed. 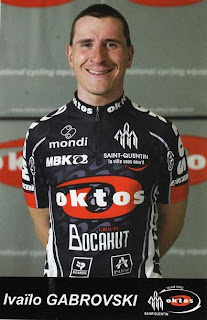 Tour of Turkey
Stage 3 at the Tour of Turkey featured a tough 152km parcours starting at the coastal resort of Antalya before heading west and inland to the mountains with three points along the way surpassing 1,600m in altitude. 34-year-old Bulgarian Ivaïlo Gabrovski - who won this race overall in 2007 and holds a record five victories in the Tour of Bulgaria - left his rivals standing on the final climb to 1,850m on the Göğübeli Mountain Pass, crossing the line alone with a comfortable lead of 1'26" to take the stage win for his Turkish Konya Torku Sekerspor team - their first ever in their home nation and sufficient to place him at the top of the General Classification.

Tomorrow, riders face 132km along the craggy south-western coast of Muğla Province where the highest climb is only 300m but has a leg-cracking gradient.

Robbie McEwen to retire late May
GreenEDGE's Robbie McEwen has announced that the upcoming Tour of California will be his final race as a professional. Queensland-born McEwen began his cycling career in BMX and became a National Junior Champion, then switched to road cycling in 1990 and immediately revealed himself to have talent, later going on to win the Points competition at the Tour de France in 2002, 2004 and 2006.

It was widely known that McEwen would retire at some point this year, but as of yet no date had been set. No confirmation has appeared on the GreenEDGE website; however, while speaking to Het Nieuwesblad he appears to have a date in mind: "After the Tour of California - that's it," he said. The Tour ends on the 20th of May.

GreenEDGE/NetApp Giro rosters
Meanwhile, GreenEDGE has published details of the squad it will send to the Giro d'Italia: Brett Lancaster, Jack Bobridge, Matt Goss, Christian Meier, Svein Tuft, Daryl Impey, Fumiyuki Beppu, Jens Keukeleire and Tomas Vaitkus have made the selection for what will be the team's first Grand Tour.

NetApp, one of the Pro Continental team to recieve a wildcard invitation to the race, have published a list of eight riders they'll send this year: Timon Seubert, Jan Barta, Cesare Benedetti, Matthias Brändle, Andreas Dietziker, Reto Hollenstein, Bartosz Huzarski and Daniel Schorn. It's not yet known if they'll add a ninth.

Cav confident Sky can take Tour double
"Who would have thought you’d have a British team with British backers, with two British riders going for two of the biggest prizes in the sport?" asks Mark Cavendish in the Liverpool Echo. "It’s a pretty big thing, that. It is not an easy task at all but it is definitely possible. I wouldn’t be at Team Sky if I didn’t think it was possible."

The double to which he refers is, of course, the Points competition, which he's a favourite to win, and the General Classification which team mate Bradley Wiggins will be chasing - something that has been achieved just three times since sport's greatest event reverted to trade teams in 1969 after two years in which it was open only to national teams, and a feat that would confirm Britain as a true cycling nation.

"I want to be part of that team that makes history," adds the 26-year-old sprinter and current road race champion. (More from the Liverpool Echo)

Other Racing News
The 2012 Giro di Lombardia will start from Bergamo rather Milan as a tribute to 1966/1973 winner Felice Gimondi who turns 70 on the 29th of September this year. Gimondi was the second cyclist after Jacques Anquetil to win all three Grand Tours during his career.

Poor Rein Taaramäe has missed out on his share of birthday luck this year - the Estonian rider, who turns 25 today (Tuesday 24th April), returned to competition the week before last after recovering from mononucleosis, then crashed at the Vuelta a Castilla y Leon - and x-rays have revealed "an incomplete fracture of the radial head of the left elbow," says Cofidis manager Eric Boyer. (More from Cycling News)


Jakob Fuglsang ‏ @jakob_fuglsang
Did an x-ray of my hand Friday and the fracture is stabile. The screw is still in one piece but the bone is still not grown 100% together.


Cycling
Addison Lee "die-in"
An estimated three hundred cyclists braved the rain and oily, wet streets to attend a "die-in" protest outside the grey eyesore that is the offices of Europe's largest minicab firm Addison Lee yesterday evening, angry at comments made by the firm's chairman John Griffin - who had said that London cyclists should be held responsible for their own misfortune if injured or killed on the capital's roads because it's their own choice to ride in " some of the most congested spaces in the world...[on] a vehicle which offers them no protection except a padded plastic hat."

Beth Anderson, one of the protest organisers, used Facebook to say: "For me, tonight was something truly special. A group of cyclists went to Addison Lee's headquarters with a message and they delivered it. Unfortunately it wasn't a huge surprise to hear John Griffin repeating the same old lines but his arguments are essentially ill-founded and based on the idea that the roads are, and can only be, dangerous. It was important to tell him that they are made even more dangerous by him."

There have been calls to hold a second protest in the hope that better weather will attract more people. More information from Boycott Addison Lee.


Why did Griffin really say what he said?

Britain: Sometimes, cyclists have to break the law to stay safe (The Times)

Britain: A memorial for a cyclist who was killed in a road accident in Belfast last year is believed to be the first of its kind in Northern Ireland (BBC)

Canada: Toronto's top doctor is recommending lowering the speed limits on residential city streets to 30 km/h in an effort to cut down on pedestrian and cyclist fatalities (CTV News)

Canada: A personal chef to one of Canada’s highest ranking diplomats claims he was pushed into oncoming traffic by an angry motorist as he cycled home from work (Ham&High)

Ghana: C2 Paracycling champion, Alem Mumuni, has once again made history as the first Ghanaian cyclist to ever qualify to the Olympics Games (Ghanaweb)

New Zealand: A lawyer for a mountain biker whose assault of a fellow cyclist was captured on camera (see: "Trail rage in New Zealand" for details and video of the assault - CP)  has warned about the growing influence of internet videos on court cases (NZHerald)

New Zealand: A woman was dragged along the train tracks after ignoring warning lights and sirens in central Auckland this morning. Police say the woman walked out onto the track pushing her bicycle, which was clipped by a passing train at a level crossing at Rossgrove Terrace, near St Luke's Rd. The bike became entangled in the train, dragging her along with it. (Auckland Now)

New Zealand: North Taranaki people appear to be divided on whether cyclists should be required to wear helmets on the Coastal Walkway. Like it or not the police have vowed to crack down on it, even threatening to give tickets of $150 to cyclists who do not comply (Taranaki Daily News)