Geox pull out of cycling 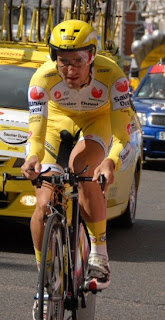 Geox-TMC may be unable to continue racing in the new season, according to blogger Inrng who reports that sponsors Geox refused to put up the required finances for team managers to deposit the bank guarantee - one of the most important of the various requirements imposed by the UCI. The funds are then held in escrow by the bank as a form of insurance ensuring riders can be paid/costs met in the case of an unforeseen event such as a sponsor pulling out mid-season.

The team is home to, among others, this year's Vuelta a Espana winner Juan Jose Cobo; Denis Menchov, winner of the same race in 2005 and 2007, and 2008 Tour de France winner Carlos Sastre.

Team officials have stated that, if the Montebelluna-based shoe and outdoor clothing manufacturer does not provide funds as contracted, they will go to the Court of Arbitration in Sport in order to seek payment.

Geox has since confirmed that it will end its "sponsorship agreement with the professional cycling team led by Mauro Gianetti at the end of the current season," leaving the team in dire straits. Riders who had signed with the team for 2012 will also now face problems if a new sponsor willing to take up where Geox left off cannot be found as the end of the transfer period - in which professional riders need to either renew contracts or take up new ones with other teams - is now over.

Geox was also a technical sponsor for the Diadora-Pasta Zara women's team, home to such illustrious names as Shelley Olds,  Claudia Hausler and, returning for 2012, Giorgia Bronzini. Geox own Diadora, having purchased the company along with 70 million euros debt in June 2009. This led to worries that the team might also lose a large part of its sponsorship and be forced to search for a new partner or face closure - however, they are continuing to sign new riders including Rossella Callovi, Alessandra D’Ettorre and Giada Borgato, suggesting that all is well.
Posted by john_orbea at 16:44