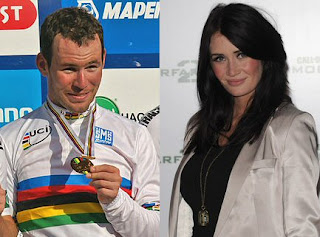 Peta, who has become a spokesperson for cycling in her own right and has completed charity rides for Help for Heroes, has a son born in 2006 named Finnbar. Her second child will be Mark's first.


"I'm happy to announce, beyond doubt, my proudest moment of this year.... @petatodd is pregnant. I'm going to be a daddy." (@MarkCavendish)

"Can now confirm that whether or not the world is ready for it... there is a baby @MarkCavendish on the way. A very happy family this end." (@petatodd)

Peta told The Sun newspaper that she's "four months gone, which means it was conceived in July, during the Tour de France. It's a Tour baby." We'll therefore be eagerly anticipating the baby's appearance on the start line of either the Tour de France or the Giro Donne in about 22 years' time.


Congratulations to Peta, Mark and family!
Posted by john_orbea at 09:14