Cycling is uniquely cruel among sports. Those who know little about it don't understand this, often assuming that a three-week stage race is much like an extended Sunday jaunt around the countryside. Those who race know that even if they come out as overall victor, the race will take more from them than they will ever get out of the race. It's a bloodsport - ever since the early days, there have been those races that seek to hurt those taking part; this being perhaps best summed up by Henri Desgrange, the Tour de France's first director, when he stated that for him the ideal Tour would be one in which only one rider finished - or perhaps better still by the existence of Paris-Roubaix, a race that actively seeks the worst roads in France and is more commonly known as The Hell of the North.

"It's bollocks, this race! You're working like an animal, you don't have time to piss, you wet your pants. You're riding in mud like this, you're slipping ... it’s a pile of shit." (Theo de Rooij on Paris-Roubaix) 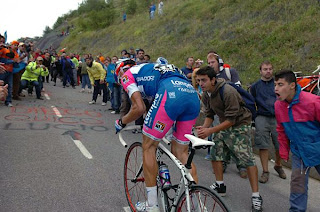 Mont Ventoux became cycling's most feared climb with the tragic, legendary death of 29-year-old Tommy Simpson in 1967, leaving it known as the mountain that can kill; its reputation as a place of sacrifice cemented forever when it very nearly claimed Eddy Merckx three years later. In fact, it's considered so challenging that were it not for that reputation, it would probably be one of the less famous climbs - after all, it's been a part of the race just fourteen times since first inclusion in 1951. The Col du Galibier, the sixth highest mountain pass in Europe, has been a very big part of the Tour since 1911. Frequently the highest point of the race, Galibier is not especially steep but reaches 2645m above sea level - a height at which altitude sickness becomes a real factor. The Col du Tourmalet first featured in the race in 1910:

"His body heaved at the pedals, like an automaton, on two wheels. He wasn't going fast but he was at least moving. I trotted alongside him and asked 'Who are you? What's going on? Where are the others?' Bent over his handlebars, his eyes riveted on the road, the man never turned his head nor uttered one sole word. He continued and disappeared round a turn. Steinès had read his number and consulted the riders' list. Steinès was dumfounded. 'The man is François Lafourcade, a nobody. He has caught and passed all the cracks' ... Another quarter-hour passed before the second rider appeared, whom we immediately recognised as Octave Lapize. Unlike Lafourcade, Lapize was walking, half leaning on, half pushing his machine. But unlike his predecessor, Lapize spoke, and in abundance. 'You are assassins, yes, assassins!' To discuss matters with a man in this condition would have been cruel and stupid."

The cruelty among cycling's fans is unique, too. Is there any other sport in which the crowds are most excited and happy not when their heroes have won and are being showered in glory, but on the grinding ascent of a mountain such as the Alpe d'Huez when they're at their lowest ebb, in pain and exhausted? This is a sport in which the fans want to see their idols suffer.

When the Tour goes up Alpe d'Huez, it's a squalid, manic and sometimes lethal shambles, and that's just the way they like it. It's the Glastonbury Festival for cycling fans. (Tim Moore)

RCS Sport, the organisers of the Giro d'Italia, understand this. Wanting to attract new interest in their race and, perhaps, sick of perpetually playing second fiddle to their big French cousin, they included the Mortirolo Pass for the first time in 1990. There are three routes up Mortirolo, the hardest being the road from Mazzo di Valtellina - a 12.4km climb of 1300m which at one point hits a gradient of 18%. 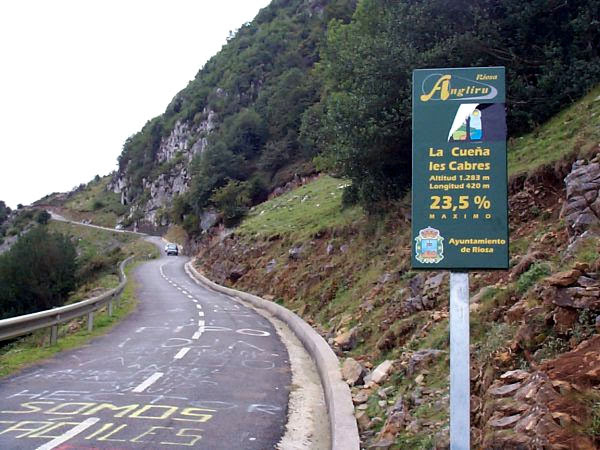 If the Giro played second fiddle, the Vuelta was treated like a jobbing musician taken on simply to make up numbers in the orchestra. For many decades seen as the lesser of the three Grand Tours and even denounced by some as boring in comparison with the Tour and Giro, organisers Unipublic wanted their race to become known as a real test, an event in which teams would need to enter their very best and strongest riders rather than recent youthful acquisitions to see how they fared. So, they began scouring Spain to find a climb as harsh as anything the other Tours had ever included. Angliru was "discovered" by Miguel Prieto, one of the directors of the ONCE team, whilst holidaying at El Gamonal in 1997 - which, despite what many books claim, is not an alternative name for Angliru but the title of a mountain standing nearby and some 142m higher.

At that time, there was no road over the summit; merely a rough track known only to local shepherds and a few of the hardier hikers who visited the beautiful region. This made it unsuitable for inclusion in the race. However, the Ayuntamiento de Riosa (Riosa municipal council) made the decision to pave the road, bringing the Vuelta to the area and - with a bit of luck - tourists in its wake. It was featured for the first time in 1999 when the great El Chava José Maria Jimenez Sastre, brother of Tour winner Carlos, achieved one of the most legendary stage wins in cycling as he emerged out of thick fog at the summit. Four years later, he was dead, having suffered a massive heart attack at the age of 33 - leaving many wondering if this was caused by the sheer stress placed upon the hearts of climbing specialists.

The climb is 13.1km long and ascends through 1255m. The initial 5km are not especially challenging, with a low average gradient rising to 9.1% at the steepest - hard work for sprinters and mere mortals, but not an ordeal by the standards of professional grimpeurs. A flat section, with an average of just 2.1%, separates this lower section from the heights - where it becomes much, much more difficult. Once into the final 6km, the road enters Las Curvas de Les Cabanes with a 22% gradient over 0.15km, before becoming less steep for a short distance. Next up, La Curva Los Picones hits 20%, followed by La Curva Cobayos at 21.5%. 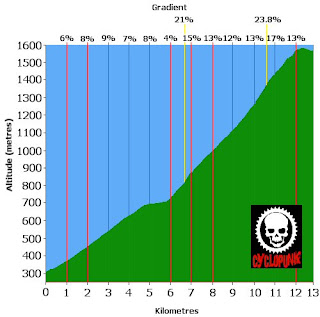 This is where the mountain gets serious - Angliru fights anyone who tries to reach its summit, testing their strength as they near the top with the fearsome La Cueña Les Cabres and a gradient of 23.8%. In 2003, when the stage was raced in heavy rain, team cars were unable to continue from this point after stalling on the steep slopes and being unable to gain sufficient grip to get going again - as a result, riders were forced to go on without support. Several did so with flat tyres, the mechanics unable to reach them. David Millar, having crashed three times on the narrow and technical road, abandoned the race in disgust. Any cyclist who can keep going through La Cueña Les Cabres has earned the right to think of him or herself as a hero, but the mountain hasn't finished yet: Aviru at 21.5% and Les Piedrusines at 20% wait before the top, remaining at 15% until the final half kilometre when it eventually settles down to 5%.

On average, a professional mountain specialist cyclist will take around two hours to climb Angliru. It is, without doubt, the most challenging climb in any of the Grand Tours; surpassing anything offered by the Tour, trumping the Giro's Mortirolo (maximum gradient a paltry 18%) and even the Zoncolan, introduced by RCS Sport specifically as a response to this mountain.

"What do they want? Blood? They ask us to stay clean and avoid doping and then they make the riders tackle this kind of barbarity." (Vicente Belda, Team Kelme manager)