Stage Map: click here
Stage Profile: click here
More Stage Guides: click here
One of the many wonderful things about the Tour of Britain is that the organisers allow fans to download the full route details, which you can do so by clicking the relevant link above and thus - if you happen to be a really obsessive fan - follow the action in centimetre-by-centimetre detail. However, road books are primarily compiled with the interests of the riders themselves in mind and thus don't include details on interesting sights and locations along the route, which is why we'll be producing the same in-depth stage guides for this race as we did for the Tour de France and Vuelta a Espana; along with mentioning any points which appear potentially hazardous to our eyes and instincts that we feel the organisers may have missed. In addition, we'll be providing updates on our predictions for race success, comments on riders and incidents and weather conditions. 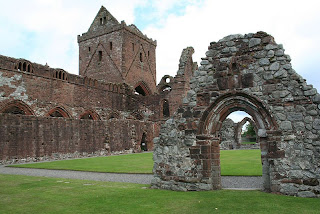 Remaining on the A701 through the town, the race takes the second exit of the first roundabout onto Edinburgh Road, doing the same at two more roundabouts until the road becomes Academy Street before negotiating Church Crescent and turning left before the bridge onto White Sands which, later on, will host the finish line of the stage. As the peloton crosses it. 0.5km from the corner, they begin the third intermediate sprint. Reaching the end of the road, the riders turn a sharp right onto St.Michael's Bridge leading to St. Micheal's Bridge Road becoming Pleasance Avenue. This leads them to a T-junction with the A710 where they turn left to head south towards the Solway Firth. 2.24km ahead, they reach a tight 90 degree right corner followed by an equally tight 90 degree left 0.38km later on the way through Islesteps. Another tight left lies 2.63km away; followed by a medium left bend left, tight 90 degree right and hump-backed bridge at New Abbey, with a medium left on the way out for good measure. New Abbey is the site of the not-very-new, ruined and delightfully named Sweetheart Abbey, founded in 1273 by Dervorguilla of Galloway in memory of her husband John Balliol, himself the founder of Balliol College at Oxford University.
The road climbs and then descends gently over the next 7.8km to Kirkbean, the route consisting of long straights with no challenging bends. The village was the birthplace in 1747 of John Paul Jones who went on to found the United States Navy. In days gone by, thousands of people seeking a better life in America passed through here before setting sail on the ships that sailed from the inlet formed by the River Nith's estuary on the Solway Firth just to the east, but today it's a quiet place given over to nature. A nature reserve on the far bank is an important breeding place for several species of birds. The race continues through on the same road, reaching Caulkerbush and a slight left before taking a tight right 54m later onto the B793. The Cat 3 climb of Banks Hill begins 0.95km after the turning as the peloton pass a large house to the right of the road, just past a junction. It ends 1.5km later along the straight road, in between farm gates on the left and right,, almost precisely 140km from the start of the race.
A medium left some distance ahead sees the road begin to descend again before arriving at a T-junction, turning an easy right before continuing to Edingham, site of an industrial complex and hence another potential spot for diesel spills. There are some large circular earthworks just right of the road as it passes the turn for the complex before arriving at a T-junction with the A711 where the peloton turn right. The road remains wide and unchallenging for 9km with exception of a slight climb towards the village of Beeswing.
Anywhere with a name such as Beeswing very obviously deserves a closer look - and an explanation of the strange name. Originally named Lochend, the village elected to rename itself after a famous thoroughbred mare, winner of 51 races during her short eleven-year life. The horse was neither from here nor ever visited, an indication of the high esteem in which she was held. There's a very steep descent 1.56km past Lochanhead, the road dropping more than 60m in around 0.7km, followed by a slight rise into Cargenbridge before the race reaches Dumfries 1.2km later. Having passes straight across two roundabouts and along Cassalands and Galloway Street, the peloton arrives at a bridge, crossing the river and turning a sharp left to enter White Sands. Following a final 300m sprint, the stage ends after traveling 170.3km from the start line.
Predictions: Now, we could be wrong because he'd plainly have far rather been at the Vuelta a Espana, but we can't see any reason why Thor Hushovd won't win this one easily. However, strange things happen in these smaller Tours - while the bog boys are all tuned to the three week Grand Tours, the lesser-known lads will go hell for leather caring not in the slightest if the quest for glory leads to an early burn-out.
Weather: Wet - and very wet. Rain is expected across many parts of Britain tomorrow, with the heaviest of all predicted for Western Scotland. That ought to be a fun start. Wind is a little tricky to predict at the moment due to Hurricane Katia lurking off Newfoundland over on the opposite side of the Atlantic - very strong wind is expected for the area in the next few days, but at present it looks as though it won't get too rough until Sunday night or Monday. The maximum temperature might climb to 18C, but probably not: 14 or 15C is more likely.
More Stage Guides: click here
Posted by john_orbea at 19:29