Stage 14 is the last one in the Pyrenees for 2011, but by 'eck it's a good one, not too long at 168.5km but with approximately 5500m total vertical gain to ensure the riders earn their post-race pasta. The finish line comes after a Hors-Categorie climb to the Plateau de Beille, a ski resort 1780m above sea level. Nowadays, Plateau de Beille in winter is full of ultra-modern BMWs, Bentleys and Range Rovers but it wasn't always like that - people were living here more than 14,000 years ago, as proven by the cave paintings dating from the Magdalenian Period during the Upper Palaeolithic. Herds of cows roam freely about the area and may decide to mess things up by standing about on the roads.

What's more, there are no less than five categorised climbs to be tackled on the way - and two of them are hefty Cat 1s, challenging ascents in their own right. Then there's a pair of Cat 2s, both reaching over 1000m and thus plenty high enough to get the lungs burning; and just before the final climb a respectable little Cat 3 in the form of Port de Lers, which is only 3.8km at 5.5% but, as it piggy-backs on Cat 1 Col d'Agnes, is still 1517m above sea level at its highest point, making it much harder than it would be if it started at sea level.

The action kicks off in Saint-Gaudens, a town of about 12,000 souls which has been a stage town 12 times before today and is the home of the Sunn mountain bike and BMX manufacturer and the birthplace of former AG2R rider Laurent Estadieu, winner of a Tour de Somme in 2001. As we leave on the D5 road, we soon come to Soueich, a village with a population of about 500. There isn't much other than vowels in Soueich, but what's there is pretty - the village and its church line the banks of the river and have the picturesque charm of  unspoiled, not particularly wealthy rural France. 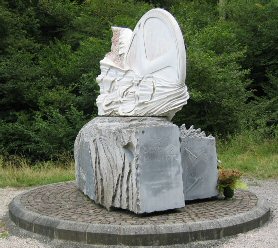 The village of Aspet marks the beginning of the Col de Portet-d'Aspet, today's first mountain, reaching 1062m with an average gradient of 9.7%. First used along with Tourmalet and d'Aubisque in 1910, this is the mountain that claimed Fabio Casartelli when he and other riders crashed in a high-speed descent in 1995. The Italian, who was only 24-years-old, hit his head on the concrete barrier and sustained horrific head and facial injuries. Following three cardiac arrests, he died in the helicopter en route to hospital. Two years later, the Youth classification in the Tour was renamed in his honour. The point where the tragedy took place is marked by a sundial aligned so that the sun highlights the dates of his birth, his death and the day he won an Olympic gold medal. Raymond Poulidor was very nearly killed nearby 22 years earlier when he crashed off the road and plunged into a ravine.

The chateau near Saint-Lary is a very fine example of a real castle rather than a large house and the beautiful village should not be missed either. Orgibet is even better, but suffers somewhat from being so pretty that most of the houses have been bought by people from the cities and abroad, pricing locals out of the market. Orgibet is also the start of the intermediate sprint which ought to be an interesting one as it's twisty and not flat - also, since Cavendish and the majority of the sprint specialists are liable to be somewhere at the back after the Col de Portet-d'Aspet, it'll probably be left open for others to go for the points. 3.5km further on, Aucuzein has some interesting buildings including a Templar chapel and a ruined castle. 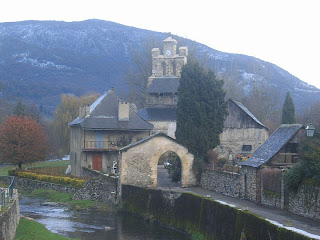 Audressein is the location of a  UNESCO World Humanity site, the Notre-Dame-de-Tramesaygues which was - and still is, in fact - an important point for pilgrims on their way to Santiago de Compostela , a journey which these days is as popular among hippies as it is among the devoutly religious and was the subject of "Spanish Steps - Travels with my Donkey," written by the same Tim Moore who wrote "French Revolutions," one of the very best books about the Tour de France.

Soon, the parcours reaches the second climb, 1395m Cat 1 Col de la Core. It's not especially steep at 5.7%, but the full 14.1km will do a good job of tiring the less strong riders out which in turn will see that they suffer on the climbs to come. 13km from the summit is Seix with the ruined Chateau de Mirabat on one hill and the complete Chateau de Seix on another. It's also the location of the feeding station.  From Seix, it's another 17.5km to the next climb, Cat 2 1110m Col de Latrape. The climb is only 5.6km but the gradient is 7.2%. Then,  passing through Aulus-les-Bains on the way, it's just 15km to the Cat 1 Col d'Agnes which is 10km long, 1570m high and has a gradient of 8.2% - verging on Hors-Categorie and one of the most famous of the Cat 1 climbs. As if that's not bad enough, there's a secondary climb piggy-backing on the side: Port de Lers which carries the road back up to over 1500m again. It's worth pressing on though, because one over this one it's downhill all the way for the next 25km. Near Aulus-les-Bains is the famous Cascade d'Ars, a waterfall which is an hour's walk from the village and well within range for the helicopters.

Just over 10km from the summit of Port de Lers is the village of Vicdessos, where a fairly tricky junction between the D18 and D8 needs to be tackled. According to (probable) legend, hunters observed a woman running naked on the mountainsides here in 1808. When they succeeded in trapping her, they found that she behaved like a trapped wild animal and was apparently unable to speak - until, that is, someone asked her how she had avoided being eaten by the bears which were then common in the area. "The bears are my friends!" she exclaimed, in perfect French. It is said that she died soon afterwards due to her inability to adjust to captivity. Somewhat more solid than this story are the ruins of Château de Montréal which stand above the village.

Tarascon, 7km north west, is home to an ancient defensive tower (called the Le Castella and as such perhaps once part of a fort) on a rocky outcrop. More recently, it's been put to good use by the addition of a large clock. Ussat, 2km further down, has a spring providing mineral water said by those who prefer to make stuff up and pretend its true rather than believe in facts to be an effective preventative or cure for all types of paralysis. Ornolac-Ussat-les-Bains, a spa half a kilometre way, has a large cave system - the biggest chamber is open to the public and would be able to swallow Notre-Dame Cathedral with room to spare.

The route then continues along the N20 via Sinsat - which really ought to be an "adult entertainment" TV channel rather than a tiny village - and then via a nice, straight-forward junction at Aulos along the D522 to Les Cabannes with two or three tricky corners and bends required to get onto the road southbound to the start of the 15.8km climb to Plateau de Beille. Once on the mountain, there are several switchbacks as the road gains altitude - these add a further challenge as although they reduce the average gradient, the small sections at the bends where the road moves up to the next section are much steeper.

The final kilometre is both uphill and twisty, with a right-hander in the final 500m to make sprints to the end difficult - though mass sprints are exceedingly unlikely after that climb, anyway - and possible further complications depending on how organisers are routing the race around the car parking at the top.

Predictions: We were completely wrong yesterday - but then, so were a lot of people: hardly anyone at all thought that sprinter Thor Hushovd would win a stage like that one - so let's see what we can do today. Whether or not either of them win will have to remain to be seen, but the Schlecks are very obviously going to be gunning for this stage. Frank is a natural choice and if Andy can get over his Contador obsession he might just surprise the critics; assuming, that is, that we're correct in our suspicions that he hasn't lost the excellent form he was in last year. Then there's Contador himself, who certainly shouln't be written off just yet - never write off Contador - who is in seventh place overall and could take a lot of points today if he's feeling good and fortune is on his side. Cadel Evans is an all-rounder, which often means a rider does well on all stages but excels in none - but that doesn't apply to him. He's a strongman and though a little stockier than most of the purebred climbers he might do well here if he puts his mind to it. Don't forget Euskaltel-Euskadi who might fancy a last shot at glory before the Tour leaves their territory: Sammy Sanchez won a mountain stage two days ago and, buoyed up by that success, might feel lucky today.

Weather: It's looking rather pleasant for Saint-Gaudens this morning - there's likely to be a bit of light cloud about later in the morning, and while there's a 20% chnce of rain at some point today it's far more likely this afternoon once the Tour is gone. The wind is variable but very light, having little or no effect either way on the race, and the temperature ideal for cycling at 16C. There'll be no change after the first 20km when the race reaches the Razecueillé area, nor at Aucazein after 40km, but conditions at altitude can change rapidly so things might be different at Col de Portet-d'Aspet (26.5km) and Col de la Core (62.5km). The area around Seix will be much the same as the start, but the wind may have picked up a little though still not enough to affect the race. The same is true of Aulus-les-Bains (100km), Vicdessos (130km) and Sinsat (150km), but it could reach as high as 27C through these areas, making the race tougher. Once again, the weather may change rapidly on the mountain passes through this region. It looks set to be good on Plateau de Beille, temperatures around 21C and wind speeds of 14kmph shouldn't affect things too much.

DEVIL WATCH: Now you're asking - he could show his horned head just about anywhere today because the entire route is riddled with the climbs that are his preferred haunting grounds. We thought Col d'Aubisque would be the most likely spot in Stage 13 but saw nothing of him - however, with the mist and huge crowds, that doesn't mean he wasn't there somewhere. For Stage 14, somewhere on the steep slopes up to Plateau de Beille seem a good option and we'll be keeping a careful eye out for him there.
Posted by john_orbea at 11:22