Ladeeeeeezangennulmun!
It gives me much pleasure to announce that the Tour de France 2011 starts today, rumours of its earlier birth being greatly exaggerated. All that stuff you've been watching for the last week and a half round Vendee, Brittany, Tarn and so on was just an extended prologue and the real competition begins today!

Alright, that's not strictly true - the first eleven stages have been absolute classics with top-notch racing and superb scenery, plus calling the a prologue would belittle the tragedies (Wiggins, Vinokourov, Zabriskie etc.), downplay the heroics (Hoogerland, Flecha) and ignore the high-speed skill (Cavendish, Costa) which, as is the case in every Tour, have been dished out with a shovel.

Meanwhile, it's fair to say that today brings such a change that we are beginning a race within a race, a test to find the world's best grimpeur who shall be crowned the King of the Mountains. In the coming days, the sprinters will be all but forgotten as attention turns to the climbing specialists: Contador, the Schlecks, Evans and the Euskaltel-Euskadi boys, because today brings the first of the high mountains. 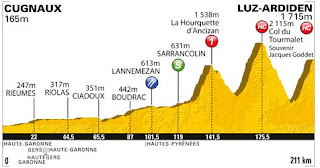 After the last two stages, which have primarily been intended to transfer the remaining riders between two points, today is not an easy day at all. In fact, it could accurately be described as bloody difficult. Those first 119km up to the intermediate sprint are almost entirely straight, though there are one or two awkward tight bends chucked in, like the one as the D3 passes through Saint-Clar-de-Rivière 12.5km from the startline - just to keep everyone awake, but let's not forget the parcours rises over 400m.

That's actually quite demoralising, because it makes your knees hurt but it's not enough of a gradient to look like a climb should a rider look back. On a big, bad high-gradient climb, your knees feel like someone's injected molten steel into the articular capsules, but at least you can look back and draw strength from the sense of sheer achievement. Today, just as some riders' knees are beginning to hurt they'll look back and it'll seem they've been riding in the flatlands - and when they look forward, they'll see all 1538m of Hourquette d'Ancizan. Which they have to ride up. And that dissolves will like a marshmallow in nitric acid.

Cugnaux is a vibrant town with some 16,000 inhabitants. The name is derived from that of a tool used to split wood, reflecting the occupation of many locals in the medieval period before the forests that once covered the landscape here were all chopped down and replaced with the arable farmlands now found among the several large urban centres nearby. The town hit French headlines in 2007 when it adopted a new law banning anyone who did not have a burial plot reserved for them from dying within the municipal area and threatening anyone sufficiently inconsiderate as to do so with harsh penalties. It's also the home of three chateaux - Cassagnère, Hautpoul and Maurens.

22km onward is Rieumes, an attractive town unfortunately connected with the distinctly unattractive "sport" of bull-fighting. Luckily for us, the Tour will be flashing through on the D3 and so we won't have to see any animals being slowly tortured for the entertainment of supposed human beings. As the riders pass through, they enter a forested section and the department of Gers which is home to around 185,300 people but is host to some 890,000 tourists every year - as might be suggested by these statistics, the scenery is not unpleasant. We're not there for long, however, soon moving into Haute-Garonne.

There are a number of villages either side of the parcours as we head towards Ciadoux, 65.5km from the start, but none are of particular note. Nevertheless, this is rural France and there will be chateaux, along with - no doubt - huge bicycles and stuff made out of hay and assorted farm detritus in the fields along the way. Ciaodoux itself is a pleasant enough village, standing on a low hill and offering the riders their first glimpse of the Pyrenees looming in the second half of the stage. It also marks the end of the D3, forcing them to negotiate a sharp right hand corner onto the D635 and then, after a kilometre and a half, a left onto the D17 at Rebirechioulet. The latter looks set to be quite a technical section - although it's an obtuse angle, generally easier than a sharp, acute bend - it's quite a complicated junction due to an irregularly-shaped section right in the middle (43°15'52.08"N 0°42'44.65"E) and may account for a rider or two.

As the riders complete their 73rd kilometre, they come to the village of Blajan with its somewhat dejected-looking church. It's a small one, but attractive in a "faded grandeur" sort of way. It represents the village rather well - Blajan isn't much, but what it is is unpretentious and likable. Nizan-Gesse, 5km on, is similar but trumps its neighbour for location - it sits at the bottom of a shallow valley with woodland along the hills either side and some impressive houses among the trees. What really gives the place an edge, though, is the views to the south: more of the same rolling countryside and patches of trees, finished off perfectly with a backdrop of the Haute-Pyrenees - and we cross into the department of the same name after the next 16km.

Lannemezan, at 101.5km from the start, makes two very impressive claims to fame. One is that it's hosting today's feeding station, the other is that its Town Hall was the very first to appear in the online virtual world Second Life. Once a thriving, wealthy place, Lannemezan fell upon hard times during the last 40 years as the heavy industry upon which it relied declined but since 2007 there have been many positive signs suggesting that the town is on the way back up as it begins to attract high-tech industry.

A few kilometres on is Izaux, famous for its Roman remains which include a well-preserved villa and then Lortet on the banks of what is unmistakably a mountain river. Next is Hèches, located in a passage through the Pyrenees foothills and famous for the nearby cliffs which are a centre for rock-climbing. 5km further is Sarrancolin, a fortified medieval town and very much the gateway into the Pyrenees. It's also the site for the intermediate sprint today, which extends along the valley floor. Arreau, just down the road, is home to many imposing medieval buildings including le Château des Nestes. Ancizan, 4km further on, is a medieval fortified village. 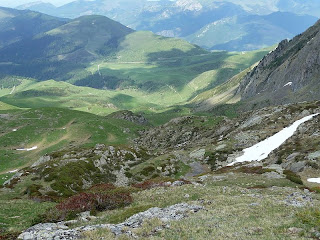 Very soon, we come to Category 1 Hourquette d'Ancizan, the first real mountain of this Tour. The 9.9km journey to the top rises to 1538m with an average gradient of 7.5%, much of it achieved by means of a complicated series of switchbacks. There is a very high possibility that riders may decide to abandon here. The D918 takes the race back down, passing through several little villages with Gripp being perhaps the most attractive, but this section is all about getting as much rest as possible before the Col du Tourmalet, this year's first Hors-Categorie climb and one of the highest and most notorious points ever visited by the Tour.

The highest road in the Pyrenees, Tourmalet is 17.1km long and with an average gradient of 7.3%, one of the most difficult and testing challenges in the Tour de France with which it has long been linked, having been climbed 79 times since its first appearance in 1910. It is, of course, considered a jewel of the race and being the first to the top brings a lot more than points. Expect to see Alberto Contador and Andy Scheck lock horns as they climb - this is where both men will begin their attempt to win the overall General Classification for the top place on the podium in Paris. Don't miss La Mongie on the way up, a beautiful little village at an altitude of 1800m made rich by winter sports. 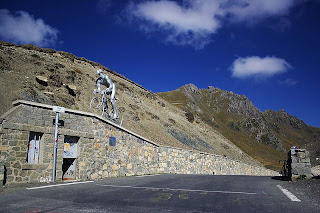 Once over, the parcours soon reaches Barèges, the highest spa town in the Pyrenees, which grew up after shepherds tending their flocks on the high slopes noticed that sick sheep would recover after bathing in the water bubbling up from the hot springs. Viella is also attractive, as is Luz-Saint-Sauveur - the location of the Chateau-Sainte-Marie which stands ruined and picturesque above the village.

Finally, we reach Luz-Ardiden - another Hors-Categorie climb, this time of 1.3km at a gradient of 7.4% to 1715m. It's often said that the Tour takes all a rider has to give and then it takes the rest, too; this was never truer than on this stage. The majority of the riders are going to be agony as they grind their way up the final summit on their way to the finish line at the top, so keep a careful eye on who performs well and who suffers here - those who do well are contenders to win the Tour.
Predictions: Cadel Evans, Alberto Contador or Andy Schleck - our money's firmly on Andy. Wildcard - Frank Schleck, who appears to be in his best form ever. But don't forget, this is home turf for Euskaltel-Euskadi, the Basque hardmen for whom the Pyrenees are regular training rides.

Weather: At long last, things are looking good - but we're in the mountains now, where the weather can change almost in an instant. At altitudes such as Tourmalet, anything can happen. The wind should remain light, but once again the situation may prove different high up as high mountain stages are always susceptible to wind.

DEVIL WATCH: Where could he possibly show up today other than near the summit of Tourmalet?
Posted by john_orbea at 11:16