Well, just like we said this morning who was ever going  to win this one other than Mark Cavendish? The dead straight, pancake flat run into the finish line looked more like a drag racing track - albeit a very, very wet one - than sprint section and Cav's running a blown big block hemi with nitrous. 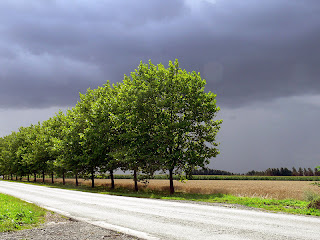 Despite the horrendous weather, the type the French describe as raining ropes and the Brits as pissing it down, Stage 11 turned out to be quite a nice sort of stage from the fans' point of view - though it was probably not that much fun to be in the race, we imagine. There's plenty of fantastic scenery in this part of the world with chateaux to match (mostly gateaux chateaux rather than the proper defensive ones we prefer, but nevertheless) and some very fine-lookin' rivers too - and it's all quintessentially French: if Jean de Florette hadn't been set in Provence, it would have looked every bit as good filmed here (though the Tarn river looks like it probably does a pretty good job of ensuring there's plenty enough water to go round). There are also lots of those lovely rural roads lined with plane trees and the all-important fields of sunflowers; because let's face it - the Tour wouldn't be le Tour without shots of the peloton riding among fields of sunflowers.

The official start was at 13:14, with one rider less than expected because AG2R's John Gadret had sadly decided to abandon overnight due to exhaustion. Gadret - like Contador - has been having problems recovering from this year's notoriously hard-going Giro d'Italia. "I really feel bad since the start," he told CyclingNews some days ago, so he's done a damn good job getting as far as he has. A few riders were seen sounding out the situation in the first few kilometres but apparently decided the time wasn't yet right for a breakaway until the 6km point when a group of nine managed to get away with a small gap, but Sky took over at the front of the peloton and hurried things up a bit so the majority of the escapees were quickly caught.

Eventually, a gang of six led by Mikael Delage (again) and including Lars Boom got ahead and successfully built an advantage of just under half a minute, but with a dearth of real General Classification threats among them the peloton didn't appear particularly concerned, letting them build up the gap to 2'30" by the time the 20km point came around and 3'55" at Cat 3 Côte de Tonnac where Lars Boom was first up for two points and Astana's Andriy Grivko just behind him for one. They then made the most of the descent, increasing the advantage to 4'15" by the time the main group reached the summit.

The peloton split up near Bruniquel as a group of about 35 including Johnny Hoogerland, who is understandably hurting, dropped off the back for a while; but they soon regrouped and got back to work, reducing the escapee's advantage to three and a half minutes as they approached the feeding station and intermediate sprint. For some reason, the gang of six were all being terribly nice and didn't seem to want to compete with one another for the top points, entering the sprint calmly and without the usual hustling. Delage looked quite embarrassed when he finally decided to go for it and was seen to apologise to Boom when he won the 20 points. All a bit silly, really. 2. Jimmy Engoulvent, 3. 17pts; Lars Boom, 15pts; 4. Andriy Grivko, 13pts; 5. Ruben Perez Moreno, 11 pts; 6. Tristian Valentin, 10pts.


Cavendish was the next one through for 9 points, having made damn sure he was on the ball to prevent Omega-Pharma's André Greipel beating him again after yesterday's stage. 8. Juan Joaquim Rojas, 8pts; 9. Francisco Ventoso, 7pts; 10. Andre Greipel, 6pts; 11. Philippe Gilbert, 5pts; 12. Matt Goss, 4pts; 13. Mark Renshaw 3pts; 14. Bernhard Eisel, 2pts; 15. Jelle Vanendert, 1pt.


The Missile experienced some form of mechanical problems a short while later, but it was rapidly sorted out once the team car reached him and he and Eisel, who had remained with him, worked together efficiently and had rejoined the peloton in next to no time. By the time they'd reached the 48km to go point, the breakaway was 3km ahead but the chase was on and their time was ticking away. Romain Feillu punctured but, with the aid of a tail wind, was soon back with the main pack who had now reduced the gap by another 30".

The second and last climb, Côte de Puylaurens, may have only been a Category 4 but it lasted for 4.2km and passed through some attractive wooded areas which ensured it turned out to be one of the highlights of the stage in the end - helped no end by a sighting of the Devil on the way up. Not many people spotted him this time as he stood among a small crowd on a bend with his El Diablo micro-camper over the road, but enough Twitterers saw him for the sighting to be confirmed. The climb took a lot out of the breakaway, tiring the members sufficiently for the peloton to regain 15" in just one kilometre. Rui Costa was the next for a puncture, passing Vladimir Isaichev who had dropped off the peloton on his way back to the group. Delage was the first to the top and collected his point, but the peloton were gaining ground rapidly and had hacked the gap down to much more manageable minute and a half as they crested the hill.

The weather proved that, as far as it's concerned, while one hand giveth the other taketh away a little later on: the rain stopped and the sun came out for a while, no doubt having a positive effect on rider morale after 142 soggy kilometres; but it chose to do so just as the parcours changed direction, turning that useful tailwind which had been blowing the race along at a healthy rate into a headwind. As would be expected, this affected the escapees to a much greater extent than it did the peloton and the gap fell to 1'15" with 25km to go - an unfortunate time for Juan Joaquim Rojas to puncture, but a couple of Movistar mates stayed with him and got him back up to speed.

HTC were in position with 13km to go, confirming what we all knew - they were planning on taking advantage of an absolutely ideal stage for their standard tactics. 3km later and they'd put the pedal to the metal to reduce the breakaway advantage to a mere 30". However, over on the other side of the road a chain of red signified that BMC also had plans as they surrounded Cadel Evans and protected him, ready to launch their own assault. The escapees were sharing the load equally in an effort to keep going, but there was no chance they'd be able to retain an advantage against a two-pronged attack of this kind.

Eisel got the ball rolling with 6km to go, leading out Peter Velits, Tony Martin, Mark Renshaw and Matt Goss as BMC's Marcus Burghardt cruised to the side of the road, apparently finished, just before 5km to go. Lars Boom, a faithful part of the breakaway for all this time, went on the attack and achieved a small lead as the peloton drew near but it was never going to last long - he was caught just half a kilometre later. Sky, Omega and BMC were all well represented at the front of the peloton as Boom was reabsorbed, but by now HTC had everything in place for a textbook demonstration of the train and there really was no other way it could possibly go. Greipel tried, but Cav wasn't going to let him win again and he surged across the line half a bike length in front for his 18th stage win, also taking the green jersey from Philippe Gilbert as he did so.

Tomorrow is going to be very different due to the appearance of the first of the real climbs - Hourquette d'Ancizan (1538 m), Luz-Ardiden (1715 m) and the mighty Col du Tourmalet (2115 m) all put in an appearance, making it almost another race entirely.