Stage 11 is another of those which, like yesterday, at first glance appear to exist only to fill time and because transporting a load of cyclists and their bikes by train would be boring TV: it's flat (even flatter than yesterday) and it's not especially long. However, we do have some technical sections today, including a number of tight bends and various obstructions, plus - this being the Tour de France - there's some impressive scenery and the usual chateaux and suchlike dotted about the place for when the race does enter a transitional section where nothing much happens.

The start is Blaye-les-Mines, acting as a stage town for the first time. It's just to the south west of Carmaux (yesterday's finish) and has a similar history, having expanded rapidly to take advantage of the coal deposits in the area. The ready access to fuel also brought the town to the attention of the Nazis in World War 2, but they didn't get it all their own way and met with opposition - the socialist mayor, Augustin Malroux, is said to have been the first man from the département of Tarn to join La Résistance. When caught, he was deported to Belsen-Bergen where he died on the 10th of April, 1945.

During the 20th Century, as old mining methods were replaced with open cast, an enormous pit was opened - by the time mining stopped at the site, it was over a kilometre wide. The crater now houses Cap'Découverte, a vast leisure centre with numerous facilities including cycling tracks around the crater walls - it's a pity that the stage does not travel this way today, because it would have made for a novel section.

As it is, the parcours heads in the opposite direction, north west along the D73 which, being almost perfectly straight for the first 4.5km, seems likely ground for an early breakaway attempt. However, like all French roads with the "D" prefix, it's extremely high quality with a smooth surface and like yesterday will encourage the peloton to build up to an impressively high rate of knots too, so whether a breakaway is possible - and if it is, whether or not it can achieve and maintain a significant gap - remains to be seen. The most probable course of events will be a repeat of what happened in Stage 10: a few hopefuls will give it a go but fail, then a successful lead group will form later. If you're watching on television, we recommend you keep an eye out for Monestiés an undiscovered jewel of a village which would have served perfectly as a location in a Claude Berri film - and if you're not, have a look on Google Earth (44° 4'14.72"N 2° 5'46.74"E).

At Monestiés we join the D91 via a series of fairly complicated bends and tight corners. If no breakaway has formed thus far, expect it to do so on this road once the technical section has passed. If it has, there's every likelihood of chase groups forming. There are a number of other small towns and villages along the way, none of particular note but all very attractive in the way that small French towns and villages are.

Do not miss Cordes-sur-Ciel, 15km on from Monestiés, as it's one of the most spectacular sights anyway along the route of this year's Tour. A medieval fortified town, many of its buildings are clustered together on a rocky hill which commands the local countryside. having successfully resisted most attempts to overthrow it through the centuries there are a large number of preserved medieval buildings within its walls.

After 28.5km we reach the day's first climb, a 3.6km section with gradients up to 4.9% - not steep, but rated Category 3 and thus offering two points to whoever is first over it. There are some more tight bends as the route takes the D15 heading south towards Vaour where there are a number of ancient dolmens in the woods. The largest is Peyrelevade, but since it's partially buried - as some archaeologists believe all dolmens to have originally been - there's not much to see from the air. Those that are not buried are small and unlikely to be seen from the helicopters. There is also a 12th Century commandery connected with the Knights Templar which, since Dan Brown brought the Templars to the attention of the general public (or a fictionalised, make-believe version, at any rate), is an obvious helicopter camera operator's target.

After a few kilometres we swing west and follow the D28 as it skirts the huge Forêt domaniale de Grésigne, a forest covering around a thousand acres, mostly uninhabited by humans. As the French government is not as idiotic as the British government, it looks set to remain state-owned and will continue to be maintained as a nature reserve providing a home for, among other species, wild cats, genets (a cat-like animal), wild boar and eagle owls. The route changes onto the D1 as it negotiates a large bend in the Tarn river which is located to the north of the road and another big open cast mine to the south, then swaps once again onto the D964 towards Larroque and, 16km onwards, to the feeding station which is 76km from the start just past  Castelnau-de-Montmiral.


Which, incidentally, you also don't want to miss. Castelnau-de-Montmiral has long been ranked among the most beautiful villages in France and has many fine medieval buildings and fortified manor houses within its boundaries. Surrounding the village are more dolmens, evidence of a local culture from much, much longer ago.

After another 9km, the riders reach the intermediate sprint at Gaillac, which has an impressive abbey and was once the home of Albert Camus. The D964 is mostly very straight, but there are some sharp bends at Graulhet as the parcours makes use of the D84 and D631 to join with the D83. A large town of about 12,500 inhabitants, Graulhet's name comes from the Occitan word for frog (graulhas), frogs being extremely common in the wetlands that characterise the surrounding countryside, those of the correct species no doubt being put to good culinary use over two thousand years that there has been a town here. One aspect of the town especially worth experiencing is the medieval district centred on the Rue Panessac.

15km on is Lautrec, situated at a tricky bend in the road and which also has several medieval buildings and a 17th Century windmill on the slopes of a mound topped by a cross in the centre of the village. The route then swings south west along the D92 and, via some more technical bends at Vielmur-sur-Agout, to the second and final categorised climb of the stage: Cat 4 Côte de Puylaurens. The gradient is only 3.8%, but it extends over 4.2km and, as the riders will by now have completed over 135km, is plenty enough to get the knees complaining. The D92 between Vielmur-sur-Agout and Puylaurens looks fairly straight on the Tour de France website map, but in reality it has several bends as it negotiates fields and woodlands and tiny hamlets, all of which ere presumably already here when the road was built. Several sections qualify as the rural tree-lined avenues, the natural habitat of the Citroen DS, which are always a defining memory of driving holidays in France.

At Puylaurens we swap by means of an uncomplicated junction onto the D84 which turns north and swings about the fields for around 10km Saint-Paul-Cap-de-Joux (St. Paul the yarmulke?) on the banks of the Tarn river. The transition onto the D112 should be problem-free as should the next 15km into Lavaur where we'll see teams jockeying for position at the front of the peloton while sending out domestiques to capture any escapees still riding out in front. The final section in Lavaur looks reasonably easy-going, flat without sharp bends and the ideal place for a high-speed sprint to the line. Lavaur is a town very much in love with cycling - it has a large cycloparc featuring facilities for cyclists of various disciplines - so expect a warm welcome and a party atmosphere, helped no end by the festivities planned for this evening to mark the Tour's arrival (including a band with a name translated by Google as the "Well Good Jazz" band. So classy, the French - even the chavs are into jazz).

Predictions: Let's see - a fairly straight, flat sprint to the finish? Does the name "Mark Cavendish" spring to mind? Basically, unless anything goes wrong today - and on such an undemanding course it shouldn't - we really can't see how anyone other than the Manx Missile could win this stage. If so, it'll be his last one for a while. have you seen the profile for tomorrow? 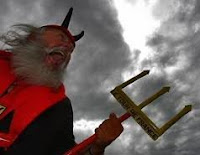 Weather: Looks like more rain, unfortunately - it's scattered showers around Blaye-les-Mines, Cordes-sur-Ciel, Vaour, Bruniquel, Gaillac, Lautrec, Puylaurens and Lavaur - so at least we ought to have a few dry sections. The twisty bits might prove slippery, but with gentle winds the weather shouldn't cause problems.

DEVIL WATCH: On the D92 just before Lautrec - the wooded valley looks like a good spot for a bit of roadside devilment.
Posted by john_orbea at 12:25