If we're completely honest, we have to admit that today's stage looked like it was going to be really quite boring. No big climbs, no technical sections, just straight, high quality modern roads - it was a stage with no real purpose other than transporting the peloton from on part of France to another.

But then, it started to hailstone heavily in Aurillac shortly before the race started - the stalwart fans refused to relinquish their positions, however, considering bruising preferable to losing their hard-won prime positions about the start line. Several riders Twittered whilst en route this morning, many of them surprised that hail happens in July in France and evidently unaware that A; hail is usually associated with thunderstorms which are themselves associated with warm weather and B; Stage 9 on the 8th of July 1996 was abandoned due to snow. The race got underway at 13:38, Rabobank's unfortunate Lars Boom having a puncture in the first minute, and assorted riders had a go at forming a breakaway. However, the peloton had spread out into a long line and was rattling along at a fair old rate, preventing anyone from doing so.

After 10.5km or so, a gang of six managed to create a small gap of about 50m but couldn't increase it, thus opening themselves to attack by just about anyone who fancied it. Around this time a small crash took place somewhere in the peloton, holding up Cavendish, Cancellara and a few others - thankfully, this is one of the few times so far in this Tour that nobody was hurt and everyone involved was back in the saddle and about their business within seconds.

Like the peloton, the breakaway was also travelling along at a good clip, both groups maintaining an almost equal speed so whilst the gap remained it hadn't grown too much by 16km, despite the efforts of Rabobank's Tjallingii who, working alone, kept trying to harry them with no success. Flecha, who was in the crash caused by the driver of a French TV car on Monday (and who has not yet apologised to the Team Sky rider, incidentally), was seen to call for the team car leading to worries that his injuries were proving too painful, but he was able to continue.

The six leaders had by now got the gap up to 30" - small, but enough to draw Thomas Voeckler's attention as he called upon his wingmen, moved to the front of the peloton and appeared to be preparing for pursuit. Perhaps he decided that, as the escapees were a relatively lowly group without a previous stage winner among their number, it wasn't worth the effort however, because in the end the attack never happened and as they passed the 34th kilometre the breakaways were 2'30" ahead.


After that, the majority of the rest of the stage was, well, it was alright. Nothing much happened, really - we got to see some quite nice chateaux (but they were nothing special), there was a bike made out hay bales in a field (but it didn't have moving parts like the one with the tractors and quad bikes in Brittany), the peloton was fast at 50kmph (but not fast enough to be nail-bitingly exciting like on steep descents) and the climbs no doubt made some riders' knees ache (but nobody was grimacing in agony like they'll be doing in a few days time), Marco Marcato being the first up both the first two climbs for a total of three points. There were no crashes, thankfully, because we've had plenty enough of those for the time being; but it was all a bit - hmm, how shall we phrase this - not boring as such, but kind of not interesting either.

One rider in the lead group was Benjamin du Tour - Anthony Delaplace was born on the 11th of September 1989, which makes him the youngest rider in this year's Tour and so young he doesn't even have a page about him on the English language Wikipedia yet. That may be about to change - he did an impressive job of keeping up with riders considerably more experienced than himself.

The gap hovered around 3'40" as Robert Gesink had some problems with his handlebars, receiving assistance from the Rabobank mechanics first and from Laurens Ten Dam and another rider to get back into the peloton second. The gap decreased by a minute as they climbed the Côte de Villefranche-de-Rouergue, which we thought was a likely spot to see the Devil today but there was no signs of him in the end. Philippe Gilbert appeared to have some sort of trouble and called the team car but whatever it was was quickly sorted while Marcato crested the climb and earned another two points - not bad for a sprinter, really. In saying that, he did well in the Tour de Suisse earlier this year which suggests we may need to rethink his rider type category.

One highlight was Thor Hushovd's problem with his shoe, which apparently wouldn't clip into the pedal properly. So as not to lose time, the Thundergod called on the team car which drew alongside so that a mechanic could sort the problem out. Doesn't sound much of a highlight, does it? Ah, the thing is, you see, they were travelling at about 60kmph. ITV4 considerately pointed out that they do not recommend we mere mortals attempt to do this - chance would be a fine thing: I can call until my throat hurts when out riding my bike, but a team car never comes and I have to stop and carry out repairs with my own lovely hands.

While Stage 10 was not the most entertaining ever, it was still part of the Tour de France and the Tour is never, ever boring - there was enough excitement packed into the final section to flesh out at least two or three stages in a lesser race. That things were about to kick off became apparent at 124km, by which time the escapees' gap was down to a fag paper under a minute and HTC-Highroad began the usual process of placing themselves in strategic positions about the front of the peloton in preparation for the final killer move. Shortly after the peloton crossed the 25km to go line, Marcato and Minard managed to breakaway from the breakaway, driving a small wedge into the group and splitting it in two. Vichot then got free and joined them, leaving the remaining three to be caught by and assimilated into the peloton which was now just 35" behind and bearing down fast as the Côte de Mirandol-Bourgnounac approached. 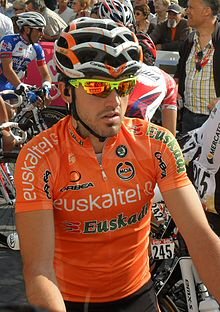 Marcato attacked again, dropping Vichot and Minard who were rapidy swallowed up by the pack, and rode alone with an advantage of about 15" for a small amount of time, but with the likes of Voeckler and Tejay van Garderen sharing turns in the driving seat there was no way he could keep it up over the final climb - he was caught with 16km to go and, this time, Voeckler was the first up the hill and claimed a point for his trouble. Tony Gallopin mounted an attack, with  Euskaltel's Gorka Izagirre counter-attacking him all the while. Philippe Gilbert chose the same time to embark upon a potentially stage-winning sprint, but the rest of the pack were happy enough to sit back and leave it for a while.

Gallopin and Izagirre dropped back to the main group fairly soon and Gilbert, who had gone very early for a rider as experienced as he is, wasn't much longer; rejoining the peloton with another 4.5km still to go. As the 3km to go marker was crossed, David Millar decided to have an attack, showing the young whippersnappers that despite his elder stateman status he can still get a bike to really shift when he wants to and before long had obtained a 50m lead. It didn't last, though, and he was caught within a little over a minute.

The final couple of kilometres was the only technical part of the stage, with a couple of very tight bends not far off 90 degrees in the run-in to the finish. This has been the topic of much discussion on Twitter today, with some diagreement over whether or not HTC-Highroad's deadly lead-out train would work here. Of course, when it comes to any matter concerning HTC you can bet your last eurocent that whatever it is, they'll have planned for it and spent months performing drills so they can cope with it - watching them doing anything is like watching a highly-trained crack troop. This proved to be the case and, by adopted a somewhat less rigid formation that is normal for them, the formation was achieved and retained around the tricky bits.

This allowed them to position the Missile in an ideal spot, primed and ready with everything set for his 18th Tour stage victory. With the line in sight, the train opened up and Mark came out like a rocket.

From somewhere nearby in the peloton, so did Omega-Pharma Lotto's André Greipel, accelerating up to Cavendish. Perhaps HTC had left it a split second too late or let him go a split second too early - whichever it was, the result was the same: Cavendish couldn't quite find the power he needed and Greipel beat across the line by a wheel.

So, it transpires that even when the train appears to be performing perfectly, sometimes things go wrong and Cavendish can be beaten. There will be others wanting to try.