Like a lot of cycling websites and magazines, we've been guilty of concentrating on the expensive bikes and ignoring the affordable ones that are the only bikes many people can afford or are willing to buy. However, we have an advantage here - this blog has only been in existence for a fortnight so we can put it right at an early enough stage to redress the balance a little. That's why we're going to have a look at the Carrera Virtuoso. We've owned a few Carreras over the years and been quite impressed overall (the same is not true of the Apollo range, which are dreadful even for what they cost), but have noticed a lot of variation in the quality of Halford's mechanics - some of them are excellent, others are dire and so it's definitely worthwhile getting someone who knows bikes to give your Virtuoso a quick once-over if you're new to the sport and not talented with the spanners. 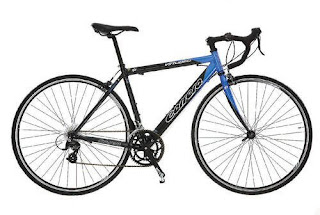 Carrera bikes are produced by Merida, an enormous company (Taiwan's 15th largest) who have been making bikes since 1972. Originally concentrating on low-end, cheap products, they've recently begun moving into the high-end  bikes, including Boardman Bikes since buying the company established by Olympic gold winner Chris Boardman (who continues producing bikes under the Boardman Elite brand) and own 19% of Specialized, an acquisition which has allowed them access to technology developed by one of the top bike companies in the world. The Carrera range is priced between Boardman Bikes and Halford's budget Apollo range, at an equal point to many of the Kona and GT bikes they also stock.

The first thing to spring to mind when we went to have a look at the Virtuoso in our local Halfords BikeHut is that it's really not a very attractive bike. There's something distinctly shoddy-looking about the top tube/seat tube/chain stays cluster, the forks look like they come from a bike 30 years ago (and being hi-tensile steel is going to be heavy too) and the paint scheme is nothing short of hideous. However, with a price of just £299.99 online - expect to pay more in the store, up to £379.99 - you're not going to get hand-crafted carbon loveliness and would be an idiot to expect as much. The frame is knocked up out of 7005 aluminium/magnesium/zinc alloy, which Halfords describe as lightweight - however, the primary reason behind 7005's composition is to make an aluminium alloy that can be easily welded rather than one that's light, thus allowing the production of welded aluminium products at a lower cost and hence retail price. This doesn't mean it's going to be heavy - it's still aluminium, after all - but the chief reason for choosing the alloy was to bring the bike in at a set manufacturing cost rather than a set weight. Whatever - 10.5kg ain't bad and whilst it might feel heavy to anyone used to a more expensive bike (in other words, the sort of people who won't be buying this one) it'll feel nimble to the noobs and positively anorexic to anyone giving road bikes a go after riding supermarket mountain bike-alikes. The short stays, described by Halfords as "semi-compact," ought to create a stiff and nippy bike which in the hands of a reasonably fit rider will be able to keep up with the rest, even if doing so requires a bit more effort. Fairly slack geometry will make it comfortable ride, highly suited to the first-timers who don't want to have to think about their feet getting in the way of the front wheel.

Kit-wise, everything is much as it should be for under three hundred quid. Dual pivot Tektro 510A brakes at both ends look the part and will do the business provided the Halfords greasemonkey shows the owner how to keep them in tune when the free six week service comes around. Surprisingly, the rest of the bits aren't unbranded or in-house items - most of it's made by Kalloy who produce perfectly serviceable gear - including the seat pillar (which taller riders will need to change: the length isn't given, but it's a recurring point in Halfords' user reviews. Friendlier Halfords bods might be happy to do that at point of sale if you ask nicely) and the handlebars. The stem is Kalloy too, but the 1.125" headset appears to be a no-namer.

The gear shifters are, of course, Shimano; coming in the form of the budget 2200 range which look alright from a distance but are a bit plasticky up close. The Big S don't make any crap gear shifters these days though, so provided the owner keeps the cables taut and the derailleurs adjusted they ought to keep working more or less as well as when new. Halfords don't say what the derailleurs are, but we'd be pretty confident in guessing the rear one'll be be Shimano RD-2200 and the front one a bottom-of-the-Shimano range model. An in-house saddle will be fine for short rides, but if you want to use this bike for 60km+ runs you'll be wanting to upgrade as soon as possible. If you don't need a longer seat pillar, try your luck in getting Halfords to give you one. There's no harm in asking.

The chainset is something called a Pro Wheel Gloria Compact. We have no idea who Pro Wheel are (nor who Gloria is, for that matter), but the 50-36 combinations will be sufficient for the sorts of stuff this bike will get up to. The bottom bracket isn't listed, but once again we'll guess a low-cost Shimano of some variety. A Shimano 8 speed block and freehub will do what nature intended for a year or so and can then be upgraded if desired. The wheelset, 36-spoked double-wall alloy jobs, should be strong enough for most riders but won't do the bike any favours in the green light drag race - they probably account for a fair old chunk of the total weight.

There's just two places where the Virtuoso lets itself down, and these are the pedals and the tyres. Of course, most expensive bikes don't come with pedals at all and the ones bolted to this one are probably just some cheapos that had been knocking about in the warehouse for a bit because those not in the know would be put off were no pedals fitted. Whatever they are, they're horrible resin ones and spinning them on the shop display bike revealed some dirt-cheap clunky bearings. The toe clips and straps are horrible too. Some riders will swap them for clipless, but most will probably just pull off the straps, break off the plastic clips and use them as flats. The tyres are just as bad, being weighty Innova models - the one good thing about these is they'll probably wear fairly quickly and since the bike's pretty good overall, the owner will go and buy some better ones instead of leaving it in the shed and forgetting about it. One owner review says the front tyre "came loose," which suggests low quality and rubbish beads.

On the whole, owner reviews are positive with most stating it's a fast bike - those who've upgraded to clipless pedals are especially impressed and only one reviewer - who says he's used his for triathlon, a purpose for which this bike is definitely not intended - says he wouldn't recommend it to a friend.

Conclusion: you can't really give the Virtuoso a mark out of ten if you compare it to the expensive top-end bikes because it's not one - it's always going to be a £300 budget bike. However, you're getting something damn good for that amount of money. Most of them will be bought by new-comers to road cycling and there's no doubt at all that they're going to get the road biking bug as a result, which will see them start looking for a better, pricier bike in a year or two and pass this one on to the next in line. Mission accomplished, it seems, so we're giving it 7.5/10. If they sorted the pedals, fork and tyres it'd be an easy 9. If you want one, you might even find it's a bit cheaper when you go to buy yours - it's been around for three years now and Halfords will be wanting to clear them out ready for a replacement sooner or later.
Posted by john_orbea at 14:07