Something stupid this way cometh

Did you think that Chanel bike with the quilted leather accessories we blogged about last week was the most stupid thing you've ever seen? Well, friends, prepare to have your illusions shattered into countless tiny, sparkling pieces. We present to you... the Aurumania Gold Crystal Edition. 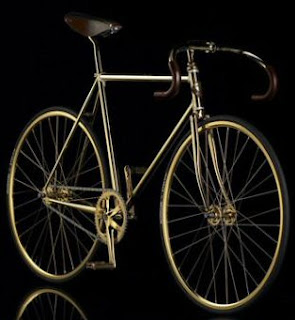 "Hey," you may be thinking, just as we did when we first saw this bicycle, "that's not a bad lookin' bike." From a distance, that's definitely the first impression - it looks like rather a classically pretty, no-nonsense, practical single-speeder. So you go in for a closer look. That's when the horror happens. 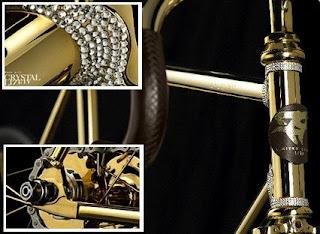 "What's that stuff round the head tube?" you think. "Surely it can't be...?" But it is. Them's Swarovski crystals, them is, and there's more than 600 of them encrusting various parts of the bike.

According to their website, Aurumania are a company devoted to the production and supply of products that "are designed and hand-crafted as the very best for the very few. That's why they all are sold as limited edition series. Numbered and intensely exclusive." Now, we don't speak dickhead, but Google Translate says that means "Over-priced crap for rich wankers." The website also says that "In the periodic table that lists all the pure elements found in nature, gold has the atomic number 79. We use this distinctive number - normally only familar to the cognoscenti - for a unique, swirling AURUMANIA tag symbol in gold." That'd be a cognoscenti including millions of chemists and just about any school pupil, then. And if it's normally only familiar to the cognoscenti, who are Aurmania making it familiar to with this bike? Tasteless morons who need to emphasise their wealth, perhaps? We'd have read more, but we were feeling sick by this point.

As you've probably guessed by now, it's not gold paint. Almost the entire bike is plated in 24 carat gold - even the rear sprocket, where it'll flake off after half a mile. However, that shouldn't be a problem because nobody who buys this bike is going to ride it. They even have a picture on the website of the bike displayed on the wall of some shitty baroque-style room with modern touches probably described as ironic, like a purple sofa, and you can also buy a matching gold-plated, crystal-encrusted bracket for precisely this purpose.

Want one? Then this blog isn't for you. However, you can purchase one of the fifty produced for a mere 80,000 Euros - which is £71,300.37 if you prefer British money, or $115,200 in the USA. That's some undoubtedly expensive shit, but it's definitely shit and a hell of a lot of money to pay for a Brooks saddle, which is the only part of this bike worth having.

Got one? E-mail us with photographic proof that you actually ride it and we'll print out this article and eat it.
Posted by john_orbea at 11:33