The sixteenth edition of La Flèche Wallonne was held on this day in 1952, following the same 220km between Charleroi and Huy that it had the previous year. It was won for a second consecutive year by the Swiss Ferdy Kübler, winner of the 1950 Tour de France. The next day, he also won Liège-Bastogne-Liège, as he had done the previous year - and he is therefore the only rider to have won the Ardennes Double twice (note "is" rather than "was" - 62 years later, Ferdy is the oldest Tour winner alive).

The Giro d'Italia has started on this date three times - 1924, 1931 and 2003 1931, the 20th edition, covered 3,012km in 12 stages and was won by Francesco Camusso, a rider who remains ranked among Italy's best climbers today. 2003 covered 3,472km in 21 stages, its longest stage at 236km roughly equal in distance to 1931's third shortest at 234km. The winner was Gilberto Simoni, fortunate in being able to enter after he was cleared by the Italian Federation of wrong-doing in the wake of a positive test for cocaine in 2002 and withdrawn from the race.

The 1924 Giro d'Italia
1924 was the 12th edition and covered 3,613km in 12 stages, won by Giuseppe Enrici who despite his Italian nationality was born in the USA and died in France. The start list was dramatically reduced by a national strike, which allowed Enrici and Federico Gay to dominate the race. To bolster numbers, organisers decided to open the event to independent riders which led to one of the most remarkable incidents in the history of the Grand Tours - a woman took part.

Her name was Alfonsina Strada, nee Morini, but she entered under the name Alfonsin so that organisers thought she was a man until it was too late; because in those days, despite the fine work done by the Suffragettes in other nations who had taken the bicycle to heart, women in conservative, Catholic Italy were not supposed to take part on bike races. Though stories of her early life have probably been somewhat embellished over the years, many state that she faced severe opposition when she began cycling and villagers would cross themselves as she rode by, leading to her nickname Devil in a Dress. Her mother apparently did all she could to persuade her to give up cycling and learn to sew, but her father - who deserves as much praise as she does - seems to have thought differently, and when she was ten years old he bought her a bike of her own for the princely sum of ten chickens. Three years later, she won her first race. The prize was a pig.

Strada did considerably better than anybody expected, finishing the first stage an hour after the winner - which in those days was considered a reasonably close result. Misfortune struck later on when her handlebars snapped in a crash during a stormy 304km stage, but a peasant (perhaps realising that Strada came from the same background) cut off a length of broom handle and pushed into the half still attached to the bike, thus permitting her to carry on. Nevertheless, she was unable to finish within the time limit. 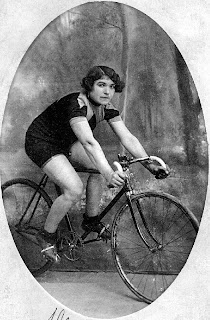 Race directors were then faced with a problem - the rules stated that Strada could not continue to ride. However, by now she'd become enormously popular with the public, many of whom would turn out simply to see her - and they cheered her, rather than crossed themselves. There appears to have also been an unspoken desire among some organisers to thumb their noses at the Fascists who had taken advantage of Nationalist discontent following the First World War to win the elections that had taken place just a month before the race began - according to Fascist ideology, the male must be the athletic hero and the female the home-maker: they did not like Strada one bit.

Consequently, they were not willing to let her go. Having checked the rules, they decided that she would be allowed to continue with them paying her expenses but without being awarded a place in the classifications and ineligible for a prize. The next day, when she finished the stage, a vast crowd of fans carried her and her bike in their shoulders around Fiume, the Italian name for what is now Rijeka in Croatia. Motivated to go on, Strada became one of only 38 riders to finish the race that year - 28 hours behind Enrici but 20 ahead of Telesforo Benaglia in last place. Her fame was so great that an appeal to provide her with a prize raised 50,000 lire.

Victor Johnson
Victor Johnson was born in Aston Manor, Warwickshire on this day in 1883. Having left school, he earned a living as a carpenter, the occupation he gave in the census of 1901 when he lived at 22 Station Road in Erdington on the northern outskirts of Birmingham - the city that was in those days the global centre of bicycle manufacturing, the industry within which his father worked. 22 Station Road is still there, now converted into a hair-dressing salon, but the upper part of the building reveals that it must have been quite an attractive house.

He began racing with the Rover Racing CC in 1902 and rapidly became a very talented track cyclist, winning 60 races in 1908 alone including the 660 yard sprint at the Olympics, held that year in London. He'd have had a second gold medal for the 1000 yard sprint too, had a puncture not seen to it that he took second place. A year later he set three World Records at the Herne Hill Velodrome in London - the quarter mile, three quarters of a mile and one mile. The quarter mile stood as a World Record for 21 years and as a British Amateur Record until 1948 when a change to UCI rules forced a slower time to be accepted instead. Johnson died at Sutton Coldfield in the 23rd of June in 1951, when he was 68 years old.


On this day in 1940, Nazi Germany invaded Belgium, the Netherlands, and Luxembourg, bringing several of Europe's most prestigious cycling races to a temporary halt.

Priska Doppman, winner of the Tour de France Féminin in 2005 in addition to two gold and multiple silver and bronze medals at the Swiss National Road Racing Championships, was born in Cham on this day in 1971. In addition to her Tour and National Championships (1999, 2001), Doppman won the GP des Nations in 2004, the Chrono des Herbiers in 2006 and numerous stages at other races.

On the very same day as Doppman and less than 50km away at Altdorf, Beat Zberg was born. Having won several National Under-19 titles, he became Swiss Road Racing Champion in 2007. They were not the only successful Swiss cyclists born on this day - there was also Karl Burkhart in 1908 (died 1976) and Ralph Näf, born 1980 and still riding with Multivan-Merida mountain bike team. So, if you happen to be Swiss and wish to become the parent of a professional cyclist, you need to keep your diary clear for the 10th of August.

Moisés Dueñas was born in Béjar, Spain in this day in 1981. Following a successful early career, Dueñas was 39th overall at the 2007 Tour de France - then was unceremoniously ejected from the race just before Stage 11 in 2008 when the Agence Française de Lutte contre le Dopage announced he had tested positive for EPO.

Joaquim Agostinho, born on the 7th of April in 1942, became the first Portuguese stage winner at the Tour de Frace when he won Stage 5 and 14 in 1969. He was the fastest man up the Alpe d'Huez a decade later and rode in a total of 13 Tours, finishing 12 of them. On this day in 1984, while leading the Volta ao Algarve, he was killed after colliding with a dog.