The Ronde van Vlaanderen was held on this date in 1922 and won by Leon de Vos (no relation to Marianne Vos and sometimes spelled Devos) who had also been victorious at Liege-Bastogne-Liege in 1919. Other than that he was born on the 17th of January in 1896 and died on the 23rd of August in 1963 - in both cases in Ardooie - and rode as a professional between 1919 and 1927 precious little is known about the rider, who took 8h55'20" to finish the course and beat 2nd place Jean Brunier - a Frenchman and the first non-Belgian to stand on the winners' podium - by 7'40". 92 riders started the race and only 32 finished.

On this day in 1978 the 200km Omloop van het Waasland took place at Kemzeke in East Flanders. The winner was Frans van Looy. In twelfth place was Eddy Merckx and it would be the last race he ever entered. 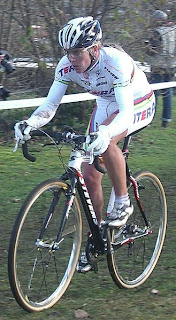 One she turned professional, she got even better. In 1999 alone, she won another Emakumeen Bira (beating Elena Barillová's previous record of two), her fourth Gracia-Orlova, the RaboSter Zeeuwsche Eilanden and Thüringen-Rundfahrt der Frauen, a third Krasna Lipa Tour Féminine, La Flèche Wallonne Féminine and another National Road Race Championship. A list of her victories since becomes rather boring - it's just a long succession of first places punctuated by occasional seconds and thirds.

In 2012, 21 years since she came to international attention with a silver medal for the Pursuit at the 1991 World Junior Track Championships, Kupfernagel signed to Rusvelo. With them, she won the Albstadt road race and was second overall at the Tour de Free State in May, won the Prologue at the Thüringen-Rundfahrt in July and the GP Oberbaselbiet in August, then the Lorsch and Frankfurt a/Main cyclo cross races in November and December respectively.

Like Marianne Vos, with whom she frequently competes, Kufernagel is talented in several forms of cycling. In addition to her domination of road racing, she won the World Cyclo Cross Championship in 2000, 2001 and 2005 with silver medals in 2002 and 2003 and a bronze in 2004; also winning the National title in 2000, 2001, 2002 and every year between 2004 and 2011, and continues to compete in both track cycling and mountain biking. In 2013, she won the Stadel Paura and Lorsch cyclo cross races in Austria and Germany, then suffered a three-week bout of 'flu that finished her season but returned in 2014 to win the National Cyclo Cross Championship for the twelfth time.


Léon Scieur
Léon Scieur, born in Florennes, Belgium on this day in 1888, found work as a glassmaker after completing his education and had never ridden a bike until he was 22. However, he got off to  good start - he was taught to ride by his neighbour, who just happened to be Firmin Lambot, a professional rider who would go on the win two Tours de France.

Just one year later, he turned professional for Armor and entered his first Tour de France (Lambot was riding his third Tour, having signed to Le Globe in 1911 and Griffon in 1913) but didn't finish. He then came 14th in 1914 but enjoyed some glory as winner Philippe Thys, also a resident of Florennes, returned to a hero's welcome and both men were celebrated.

He worked as a mechanic during the war, then returned in 1919. During Stage 3, he suffered a series of punctures - reports vary between five and six - which used up all his spares, so he had to mend them himself because in those days mechanical assistance was strictly forbidden and so he couldn't wait for a team car to arrive, and as repairing a punctured tubular tyre required the tyre to be peeled away from the rim and slit open along the stitches that hold them together to allow access to the inner tube before being sewn back up again and re-glued to the rim, this was a major undertaking. The weather was awful and he had to knock on doors to find a needle and thread, eventually finding an elderly lady who took pity on him and allowed him to carry out the repair in the shelter of her porch. As his hands were numb with the cold, he asked if she would help with the stitching, but officials told him that this would count as illegal assistance and that he would be penalised if she so much as threaded the needle for him. Eventually, he completed the repair but lost more than two hours and Lambot won the race. 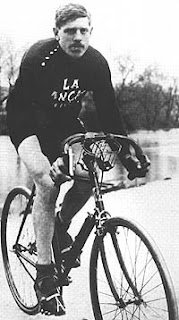 He was 4th again in 1920 (when he also won Liège - Bastogne - Liège), but this time he won the difficult Stage 11 - 362km through the mountains from Grenoble to Gex. Then, in 1921, he was back with a new pedaling style - keeping to a lower gear than other riders, he pedaled hard at a higher cadence. This technique, since used by Miguel Indurain and Lance Armstrong, allowed him to keep going at a high pace come what may, and he took the yellow jersey in the first stage and kept it throughout the remainder of the race. Spectators, impressed by his unstoppable ride, nicknamed him The Locomotive.

Stage 10 that year was a particular highlight: when his fellow Belgian Hector Heusghem committed the cardinal sin of attacking while the race leader was sorting out a puncture, Scieur set off in hot pursuit once his bike was repaired. When he caught the offender, he rode alongside him for a while to deliver a stiff lecture on the importance of etiquette and respect for tradition before powering away and winning the stage with an extra six minutes added to his advantage.  By Stage 12, Scieur's victory seemed so certain that most of the other riders gave up trying to beat him and competed among themselves for second place. Realising that this would make for a less interesting race, an angry Henri Desgrange decided that in Stage 13, the independent touriste-routier cyclists - whom he termed the "second class riders" - would set off two hours before the professional riders. The independent Félix Sellier won the stage, but to no avail: Scieur and Heusghem finished together and with a good enough time to still be leading the race.

Race organisers then decided that the next day the touriste-routiers would set off two hours after the professionals, but the riders had had enough of being played about by this time and threatened to strike; so they set off together as normal. During that stage, Scieur broke a wheel. Since the rules stated that a rider had to finish each stage with his original equipment unless an official had declared the broken part beyond repair and granted permission for it to be replaced, he looked around for someone who could give him the go ahead to fit a replacement from the team car; but there were no officials anywhere nearby. However, a new rule demanded that a rider had to finish each stage with his original equipment, but didn't specify that the broken part had to be in use or even fixed to the bike - so, he fitted a replacement wheel and strapped the broken one to his back. He then rode for more than 300km to the finish line, continuing even when the wheel dug deeply into his flesh and left his jersey soaked in blood. The scars were visible for fifteen years.

Scieur entered the Tour three more times, but failed to finish each of them. In 1922, he abandoned in Stage 3  with a broken fork, perhaps out of bitterness for what had happened the previous year as much as due to the difficulties in getting it replaced and Lambot won his second Tour. He then abandoned in Stage 6 in both 1923 and 1924 before he retired in 1924, opening a garage and fuel distribution business in Florennes where he remained right up until his death on the 7th of October 1969.


Serse Coppi
Born on this day in Castellania, Italy in 1923, Serse was the younger brother of Fausto and himself a cyclist of considerable talent. The greatest win of his career came in 1949 when he was declared joint winner at Paris-Roubaix after a breakaway led by the Frenchman André Mahé were misdirected into the velodrome by race officials. Mahé was first over the line and originally declared winner, but since Serse had been the first of those who took the correct route judges later decided the victory should be shared.

In 1951, when Serse was 28 and Fausto was 31, they entered the Giro del Piemonte. The older brother was having one of his rare off-days and riding awkwardly, so Serse pulled alongide him to offer encouragent as they rode through Turin. While they talked, Serse's front wheel caught in a tramline and he fell. He abandoned the race, but after an initial inspection was able to ride back to their hotel. Later that day, he began to feel unwell and was taken to hospital where a cerebral haemorrhage was diagnosed. He died in his brother's arms before an operation could carried out.


Steve Cummings, born in Clatterbridge, Great Britain on this day in 1981, won the 1999 Junior National Road Race Championship, one gold and one silver Olympic medal, numerous National Track Championship titles and came 2nd in the 2008 Tour of Britain before signing with Team Sky in 2010. In the 2011 Vuelta a Algarve he beat Alberto Contador to the mountaintop finish of Stage 3 and, later in the year, came 4th at the Tour of Beijing. At the end of the season, he confirmed that he would ride for US-based Team BMC in 2012.

Joseba Zubeldia, born in Euskadi on this day in 1979, rode for Euskaltel-Euskadi throughout his career from 2001 to 2007. He turned professional in 2002 and is the younger brother of Haimar who left Euskaltel for Astana at the end of 2008 and has since signed to Radioshack.

Mirko Celestino was born in Albenga, Italy on this day in 1974. His first major success was the Giro di Lombardia in 1999 and he went on to do well in several classics, including victory at the Milano-Torino in 2001 and 2003. He entered the Tour de France in 2004 and 2006 but failed to finish on both occasions - his best Grand Tour results were 4th in Stages 3 and 7 at the 2005 Giro d'Italia. Celestino has also competed in mountain bike events in recent years, finishing the 2010 European MTB Marathon in 2nd place.