In 1968 the race was won for the first time by a German rider, Rolf Wolfshohl, who was fortunate to be there because he'd provided a sample that subsequently proved positive at the World Cyclo Cross Championhips that year and, as the cycling world had finally woken up to the fact that it could no longer turn a blind eye to doping following the tragic, heroic and ultimately stupid death of Tom Simpson on Mont Ventoux the previous summer, he had been banned from competition. However, the actual process of banning riders was at the time no more advanced than the process of catching them out in the first place; as a result of which neither the UCI nor the German Federation had remembered to provide him with official notification of his ban and, due to their oversight, he was able to continue racing.

1976 was won by Michel Laurent, a Frenchman who risked the wrath of his countrymen by racing with a Belgian team in the days when the rest of the cycling world was still smarting from Eddy Merckx and his near-total domination of the sport. 1979 was won by Joop Zoetemelk, a Dutchman who rode for the same team that year and would both enter and finish the Tour de France a record sixteen times during his career.

In 1984, the Irishman Sean Kelly equaled Eddy Merckx's record of three consecutive wins - but he would go on to win for the next four years, too, thus shattering all the multiple wins previously set including Jacques Anquetil's five non-consecutive victories. For the second year in a row, the race started at Issy-les-Moulineaux. The King of the Mountains jersey changed to yellow and blue, the corporate colours of new sponsor Le Crédit Lyonnais, and the Points Competition disappeared from the race altogether, not to return until 1996. Alex Zülle became the second Swiss rider to win in 1993, then the Dutchman Michael Boogerd won in 1999 - since retiring from cycling in 2007, Boogerd has become a successful figure skater.

2004 winner Jörg Jaksche was paid 100,000 euros by German newspaper Der Spiegel in 2007 when he made a warts-and-all confession detailing his doping habits complete with various revelations concerning the sport. He finished the confession by saying that he was going to work with race organisers and authorities to stamp out the problem - but the German Cycling Federation gave him a one-year ban and, afterwards, none of the teams wanted him; so he retired and very little has been seen or heard of him since. 2010 brought a second win for Alberto Contador, who had become only the second Spaniard to have won this race three years earlier. 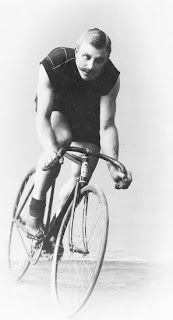 Thorvald Ellegaard was born on this day in 1877 in Fangel, Denmark and named Thorvald Kristian Kristensen - he and his brother changed their names for reasons unknown, choosing the name of the farm upon which they were born and grew up. He first raced on the 22nd of May 1895 in Slagelse, where Hans Christian Anderson attended grammar school, then completed his apprenticeship as a mason in 1896.

Two years later, he turned professional and immediately began winning important races, taking three National Championship titles in his first year. Leaving the Danish cycling community in no doubt that they had a world beater, he was packed off to France in 1901 where he won the GP de Paris and the World Sprint Championship - a title he retained for the next two years (and would win again in 1906, 1908 and 1911, winning silver medals in most of the intervening years) and adding the European Champion title in 1902 and 1903 (and again in 1908 and 1910).

Finally, after dominating the races for a decade, he moved his family to Paris and took up permanent residence - however, this was not so that he could race more but because he was earning enough money to enroll his daughter, whom he had named France, into one of the world's most prestigious music schools so she could complete her training as a pianist. France later gained a place at the Paris Conservatory - the world's most prestigious of all - and became one of the most respected musicians of the 20th Century, her renditions of Chopin being considered among the finest of all time.

Ellegaard continued racing, not retiring until the 26th of September in 1926; a little slower than he had been, but still fast enough to have achieved podium finishes at the Copenhagen Sprint for the last four years (having won it the year before that). His professional career spanned an extraordinary 29 years, during which he is believed to have won 925 races and was made a Knight of Danneborg, and he died on the 27th of April, 1954. His surprisingly understated grave can be found in Søllerød Cemetery, Copenhagen.

Maximiliano Richeze
Maximiliano Richeze is often considered to be the most successful Argentinian professional cyclist, Juan-Antonio Flecha (who was born in Buenos Aires) having always competed for Spain when racing in non-trade team events (some will also try to claim Lucien Petit-Breton who was born in France, took Argentinian nationality but then raced for France).

He became National Champion for the 1km time trial in 2003 before concentrating more on road racing, a discipline in which he enjoyed considerable success including a gold medal in the Under-23 class at the 2005 Pan-American Games. In 2007 he won stages at several European races, with the highlight of his year being first place for Stages 18 and 21 at the Giro d'Italia, resulting in a contract with the Pro Continental CSF Group-Navigare team which received an invite for the 2008 Giro. However, a short while before the race began Richeze failed an anti-doping test for stanazolol, an anabolic steroid also known as Stanazol or Winstrol. He was cleared by his national federation, but the UCI appealed to the Court for Arbitration in Sport who then handed him a two-year ban, but he competed in the Vuelta e San Juan in 2009. When his ban expired, he returned to full-time racing and had a successful 2011 with one stage win at the Japanese Kumano race and three at the Tour of Slovakia.

In 2012 he won three stages at the Vuelta a Mendoza, the Road Race at the PanAmerican Games, two stages at the Tour of Japan, three stages at the Kroz Srbiju, four stages at the Vuelta a Venezuela and two stages and overall at the Tour of Hokkaido. 2013 got off to a successful start when he won the Prologue at the Vuelta de San Juan, then he made a promising return to the track to win the Scratch and Team Pursuit at the PanAmerican Championships. Riding for Lampre-Merida, Richeze got the chance to go to the Vuelta a Espana that summer and performed well, finishing second on Stages 5 and 6, third on Stages 12 and 17 and fifth on Stage 21; he suffered on the mountainous stages and was frequently among the last riders to finish (on Stage 20, which climbed the notorious Angliru, he was the 144th and final rider to finish), eventually coming 141st overall - only three riders finished with slower times.