André Leducq
Born in Saint-Ouen, France on this day in 1904,  André Leducq achieved considerable success on his bike during his youth - he came 3rd in the National Amateur Championships when he was just 19 and won the event the following year - set him on a path that would lead to him becoming one of the most popular riders in cycling history, both at home and in England where his attempts to speak English (Inspector Clouseau was said to sound like Leducq) won him any fans. Ron Kitching, a world-famous frame builder and so-called professional Yorkshireman, remembers visiting Paris and performing a duet of On Ilkla Moor Baht' At - a song that recounts the tale of a young man who meets his girlfriend on Ilkely Moor but does not wear a hat while doing so, causing her to warn him that he risks death from exposure and that his body will be eaten by worms, the worms will be eaten by ducks and the ducks will be eaten by the singers of the song. It is written and performed in the North Yorkshire dialect of the mid-19th Century, a tongue that had as much in common with Old English and Old Norse as modern Standard English, and Leducq's rendition must have been nothing less that stunning - especially when one considers that it was performed at 5am, after the two men had enjoyed several Parisian nightclubs. 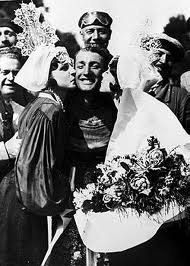 Leducq was also popular with female fans, some of whom were fans of cycling and some of whom were fans of him - it was said that he "honoured" them as frequently as he honoured his track contracts. However, he was no useless playboy: his Tour de France record of 25 stage wins held for a quarter of a century until it was finally broken by Eddy Merckx and Bernard Hinault didn't beat him until 1986 and he's still the third most successful stage winner of all time today, with Mark Cavendish just behind him with 23. Leducq rode his first Tour in 1927 and won Stages 6, 23 and 24, coming 4th overall, then came 2nd in 1928 after winning Stages 2, 10, 11 and 16, having already won Paris-Roubaix that year. In 1929, he won Stages 2, 11, 17, 18 and 21 and wore the yellow jersey for one day (this being the famous incident when he, Victor Fontan and Nicolas Frantz had the same time following eventual winner Maurice Dewaele's loss of the race leadership due to a series of punctures, thus becoming the only time that three riders all wore yellow - an event that is extremely unlikely to happen again, since times can now be measured to thousandths of a second if need be) but this time dropped to 11th overall.

Early in the Second World War, Leducq was arrested by the Nazis for reasons unknown (the Nazis being the sort of people that they were, there may not have been a reason). The rider recounted after the war that things were not going his way while under detention and he began to have very grave worries about his safety - but then, he was saved by an unlikely hero: a high-ranking German officer, who had been watching him, suddenly said, "I know you - you're Leducq" and let him go.

After retiring in 1939, Leducq took up a job with the Mercier bike company and briefly managed the firm's team, resigning from the position because he felt that the new generation of riders were boring and had none of the sense of fun and adventure that his own had done.  When Raymond Poulidor was with the team and  trying to win his own Tour de France (but never would) after several years in which he became known as "The Eternal Second" , Leducq sought to encourage him with the story of his arrest by the Nazis. "So you see, Raymond - sometimes, it's good to have won a Tour," he finished. He died on the 18th of June in 1980.


Russian Natalia Boyarskaya, born on this day in 1983, came to widespread attention at the 2008 Olympics in Beijing when she made a solo break and built up an advantage over the peloton of more than a minute, then lost it when she first had to stop and ask directions due to insufficient signage and then tackle a descent at low speed due to heavy rain and poor visibility. Great Britain's Emma Pooley caught her a short while later but expended too much energy in doing so, leaving Nicole Cooke to win the race. Boyarskaya was National Road Race Champion in 2007 and won the Tour Féminin en Limousin in 2008. In 2011, she won the Gracia - Orlova in the Czech Republic, then in 2012 while racing with RusVelo she was second in the National Individual Time Trial Championships and fifth in the Chrono Champenois-Trophée Européen.

Takashi Miyazawa is one of the very few Far Eastern cyclists to have made an impact in cycling's European heartland, beginning when he came 2nd in Stages 3 and 5 at the Vuelta Ciclista a Leon in 2005. He stayed nearer to home in 2006, winning Stage 1 at the Tour of Siam, podium finishes at several other events and the overall Generall Classification at the Tour de Okinawa, then scored a series of podium finishes in Europe and the East in the next season. He won two Tours of Hokkaido in 2008 and 2009, then became National Road Race Champion and won the Kumamoto International Road Race criterium in 2010. In 2011, he returned to Europe and won Isegem, came a surprising 5th at Paris-Brussels and 6th at the GP Nobili Rubinetterie Coppa Città di Stresa.