Costante Girardengo
Costante Girardengo, who died on this day in 1978, is regarded as one of the greatest Italian cyclists of all time, by some more so than Gino Bartali and Fausto Coppi. Veteran fans still maintain that he was more popular than Mussolini prior to the Second World War and claim that whereas children in Italy's remote villages could not recognise the fascist dictator when shown a photograph, they all knew Girardengo. His successes were so many and so admired that all express trains passing through his hometown Novi Ligure would stop, a peculiar Italian honour reserved usually for the upper echelons of great statesmen. Had he not been robbed of his best years by the First World War, which broke out just a few years after he turned professional and during which he very nearly died after contracting Spanish 'Flu (he had a battle getting a racing licence afterwards, as his team manager believed that a rider who had been so ill would no longer be competitive), he might well have become known as the greatest road racer of all time. 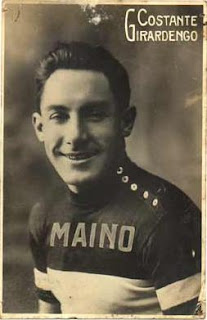 Zinaida Stahurskaya
Zinaida Stahurskaya is widely considered to have been the most promising cyclist Belarusia has yet produced. Born on this day in Vitebsk in 1971, she managed to finish the Elite Road Race at the 1992 Olympics in 16th place despite being only 21 years of age, then won the Krasna Lipa Tour Féminine two years later. In 1999, she won Stage 3 at the Giro Donne and came 2nd in Stages 2 and 11. The next year brought even more success when she became World Champion and won the Giro della Toscana Internationale Femminile. She would win Stages 2, 4 and 6 of the Giro Donne in 2001, the year that also brought her first failed anti-doping test resulting in a four-month ban. 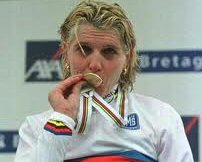 
Bruce Bursford
Today marks the anniversary of the death of Bruce Bursford, a British cyclist who set nine speed records whilst still at school. He retained his record-breaking ambitions in adulthood and began studying the technology used in Formula 1 racing and aerospace, combining streamlining and new materials in an effort to create the ultimate speed-record-breaking bike - one of which he named Ultimate, the other Millennium. Millennium's silica tyres were inflated with helium and its wheels span on ceramic bearings to reduce weight and friction to the barest minimum. It was on this bike that Bursford set his record in 1995, reaching 334.6kph (207.9mph) under simulated conditions on rollers, beating the previous record by 88kph. Ultimate would later win him a design award. In 1999, he set a new World Time Trial record, beating the previous best time set by Chris Boardman earlier in the same year.


Jurgen van de Walle, and ex-Junior National Champion and top ten stage finisher at the Tour de France (7th, Stage 16, 2010), was born on this day in 1977 in Eeernegem, Belgium. 2013, van de Walle's 15th season, was to be his last - after riding one final Grand Tour (the Vuelta a Espana), he retired.