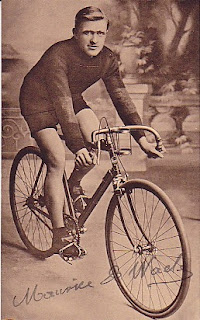 Born in Lovendegem, Belgium on this day in 1896, Maurice Dewaele (also spelled de Waele) won the 1929 Tour de France despite being so ill before Stage 15 that he fainted and the start had to be delayed for an hour. Though he recovered enough to start, he wasn't well at all and his team had to literally surround him throughout the stage, holding him upright. Remarkably, this allowed him to lose only 2'49" and he stayed in the overall lead; however, he would probably have later lost that lead had Jef Demuysere not have been penalised 25' for taking a drink outside of the permitted areas, a penalty that saw him drop from second to third place.

Tour director Henri Desgrange, who had seen how ill Dewaele was, was furious that the Alcyon team had been able to dominate the race to such an extent that he won it anyway. "My Tour has been won by a corpse!" he proclaimed, insisting that the outcome had been decided by trickery rather than by skill - while Desgrange had never much liked trade teams (because, first of all, he felt that the Tour should be won by heroic solo effort, and secondly because they could join forces in opposition to his decisions, which he really hated), but was probably more furious than he'd otherwise have been because he was hoping for an especially spectacular victory that year when the Tour was reaching a larger than ever audience due to being covered by live radio broadcasts for the first time. As a result, the following year trade teams were banned from the Tour in favour of national teams, which Desgrange believed would prevent the team tactics he had always hated so much. (For a more complete description of the events that led to Dewaele's Tour victory, click here.)


Happy birthday to José Pérez Francés, third place winner in the 1963 Tour de France behind Jacques Anquetil and Federico Bahamontes. He was twice Spanish Road Champion (1960 and 1963), won three stages in the Vuelta a Espana and came 2nd overall in 1968, came 5th overall in the 1968 Giro d'Italia and 2nd in the 1963 Dauphiné Libéré where he won Stage 3.  Francés was born in Peñacastillo, Spain on this day in 1936.