Rik van Looy
King of the Classics Rik van Looy was born on this day in 1933 in the town that bears everyone's favourite Belgian placename, Grobbendonk. Rik became the first man to win all five Monuments - Milan-San Remo, Tour of Flanders, Paris-Roubaix, Liège–Bastogne–Liège and the Giro di Lombardia, a feat since repeated by only Roger De Vlaeminck and Eddy Merckx.

Known for his lightning-fast sprint, van Looy - like many sprinters - was simply too heavy to win a Tour, suffering badly in the mountains due to his muscular physique, yet he won the Mountains Classification at the 1960 Giro d'Italia, a feat that cannot be easily explained. All in all, he is thought to have won around 500 races during a career that spanned 17 years and came to an end only because of his anger at younger cyclists who, in his opinion, failed to show him the respect he felt he deserved.


Lucien Petit-Breton
On this day in 1917 Lucien Georges Mazan was killed when he crashed into a car near the WW1 front at Troyes. He had emigrated to Argentina with his family when he was six years old and, some time in 1898/9, he won a bicycle in a lottery competition and began racing under the false name Louis Breton so he could keep his sport secret from his father who wanted him to get a "proper job." 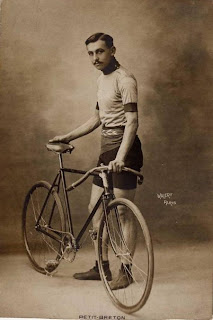 In 2013, still with GreenEDGE (now known as Orica-GreenEDGE), Albasini won Stage 4 at Paris-Nice and was second on Stage 14 at the Tour de France.


Michael Rogers
Born in 1979 in Barham, New South Wales, Australian cyclist Michael Rogers won both the Tour of California and Vuelta a Andalucía in 2010. He has been World Time Trial Champion twice and finished 9th overall in the 2006 Tour de France and 7th in the 2009 Giro d'Italia. Rogers rode in 2011 and 2012 with Team Sky, after stating that he would no longer concentrate on the longer stage races as he felt they didn't suit him; in his first year with the British team he was 12th overall at Paris-Nice and in the second he won two stages and the General Classification at the Bayern Rundfahrt, then came 23rd at the Tour de France, sixth in the Individual Time Trial at the Olympics and ninth at the Post Danmark Rundt. He switched to Saxo-Tinkoff for 2013 and was second overall at the Tour of California, sixth at the Critérium du Dauphiné, sixteenth at the Tour de France and won the Japan Cup.

In 2012, Rogers was awarded the bronze medal for the Individual Time Trial at the 2004 Olympics. The race had been won by Tyler Hamilton who later confessed to doping and returned his gold medal, resulting in upgrades for the rest of the finishers (suspicions had been raised immediately after the race when a sample provided by Hamilton tested positive but escaped punishment due to a laboratory mistake destroying his B sample; a month after the Games he again tested positive at the Vuelta a Espana and was banned for two years). However, in December 2013, just days before his 34th birthday, news broke that Rogers had himself tested positive, the banned bronchodilator Clenbuterol having been detected in a sample he'd provided at the Japan Cup in October. He denied knowingly ingesting the drug, suggesting that it had most likely got into his body via contaminated meat - Clenbuterol is sometimes given to beef cattle, illegally in many nations, to produce leaner meat, this being the same explanation given by Alberto Contador when he tested positive for the drug. As is the case with all athletes following a failed test, Rogers has the right to request a test of the B sample provided at the same time as the positive sample; by his birthday he had not made that request and was provisionally suspended from his SaxoBank-Tinkoff team (also Contador's team) pending a full investigation.

Karel Kaers, a Belgian professional, died on this day in 1972. Among Kaers' 30 wins were a World Road Championship title (aged just 20, he won the first time he entered and became the youngest ever world champ), National Pursuit and Road Champion titles, the Six Days of Paris, Copenhagen, London and Brussels, a Tour of Flanders and the Circuit de Paris. He was born on the 3rd of June 1914, making him 58 when he died.


It's the anniversary of the death of Albert van Vlierberghe in 1991, the Belgian professional rider and winner of three stages in the Tour de France and Giro d'Italia. Vlierberghe's sixth place result after one stage of the 1979 Deutschland Tour is controversial since notorious ex-soigneur Willy Voet claimed that he gave the rider a lift in his car so as to avoid a hilly section - whether or not this is true will probably never be known and opinions must be based entirely on personal opinions of Voet and his capacity for lying.
Posted by john_orbea at 00:00