Fiorenzo Magni
On this day in 1920 Fiorenzo Magni - known as "The Third Man of Italian Cycling's Golden Age" after Coppi and Bartoli - was born in Vaiano, Tuscany. He's the only man to have won three Tours of Flanders in a row and also won three Giros d'Italia, three National Championships and seven Tour de France stages during his sixteen years as a professional.

Magni's other claim to fame is that he was the first rider to find sponsorship with a firm that wasn't a manufacturer of bikes or bike components. Nowadays, when we're used to banks, mobile phone firms, TV networks and providers of liquid gas products financially backing teams, the storm that blew up when Magni announced he would be sponsored by the beauty products company Nivea seems rather odd. What's also odd is that Nivea were interested in backing Magni - while the man can't be described as having been ugly, he had the sort of rugged looks that suggest he wasn't exactly a regular user of moisturiser.

In fact, it's not entirely true that he was the first because the British team in 1947 had been sponsored by a football pools company called ITP - Magni's sponsor, however, was the first sponsor not previously connected with sport, a phenomenon that be came known as an extra sportif sponsor until it became so common it no longer drew comment. It's also not true that the row about it was entirely down to opposition to an extra sportif, as it seems that other riders stoked what was originally a minor argument into an inferno because they didn't like him. And not without reason, either: he may have been a heroic rider but Magni was, say those who knew him, a dyed-in-the-wool fascist, and he fought for the Fascists during the Second World War. 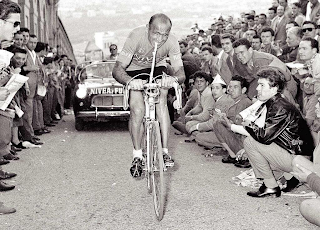 He was an exceptionally strong rider, proving his hardman credentials in the 1956 Giro d'Italis which he rode with a broken shoulder. Finding that his injury made it impossible for him to pull up on the bars, thus preventing him from climbing, he asked his mechanic to tie a length of inner tube (some say it was a bandage, others surgical tubing) in a loop to his handlebars so that he could pull up using his teeth. Because he couldn't brake properly he crashed again four days later, landing on his broken collar bone and also breaking his arm, then fainted from the pain. When he regained consciousness in the ambulance he managed to escape, found his bike and finished the stage. Four days later, on a stage that had such bad weather sixty riders abandoned the race, he came second behind Charly Gaul.

Magni would almost certainly have won a Tour de France had his career not have coincided with those of Fausto Coppi and Gino Bartali. Hardman or not, the two Italian greats completely over-awed him, especially Bartali and had he ever have threatened Bartali's chances of winning, it's a safe bet that Magni would have dropped back to let him win. In 1950, when Bartali left the Tour after being threatened by fans angered by a very minor tussle with Jean Robic on the Col de Portet d'Aspet, Magni unquestioningly abandoned the race and went with him.

In fact, Magni's lifelong admiration of Bartali is somewhat surprising: while Magni had been a Fascist, Bartali risked his own life working for the Italian Resistance and saved many Jewish lives by smuggling refugees over the border into Switzerland. When he died on the 19th of October in 2012, some obituaries mentioned evidence that towards the end of the war he had changed sides and fought for the anti-Fascist partisans - had he turned against his old beliefs, perhaps after being horrified by the evil done by the Italian fascists, the Nazis and their sympathisers, or was he simply trying to ensure his own safety when it became apparent that Fascism would be defeated? We will probably never know.

Jan Bárta
Born in Kyjov in Czechoslovakia on this day in 1984, Jan Bárta came to international attention with his Under-23 National Road Race title in 2002. He then returned consistently impressive results with numerous podium places until 2009 when he won a stage at the Tour of Austria, demonstrating stage race potential. This was confirmed when he finished both the Tour de Normandie and Tour of Slovakia in 7th place in 2010, followed by 8th at the Tour of Austria and a very impressive 3rd at the Tour of Britain in 2011, during which he faced some very stiff competition.

As a rider with NetApp, a team in the Professional Continental class, his chances to prove his mettle at the Grand Tours will had to wait until NetApp got a chance to enter on a wildcard invitation, as was the case at the Giro d'Italia in 2012 - and he finished Stage 14 in second place, taking 65th place overall before going on to win the National Individual Time Trial Championship and take seventh in the same event at the Worlds. Those were results that must surely have caught the eye of the Pro Tour teams, but if he received any offers for 2013, Bárta declined them and stayed with NetApp. That year, he won the Individual Time Trial and the Road Race at the Nationals, then rode another Grand Tour when NetApp got an invite to the Vuelta a Espana. he was 19th on Stage 11 and finished 96th overall after working hard for his team, then finished the Individual Time Trial at the Worlds in 11th place - more good results that must again have drawn interest from the Pro Tour ranks, but he has again chosen to remain with NetApp for 2014.

Mathias Brändle
Mathias Brändle,  who was born on this day 1989 in Hohenems, Austria, rode with Bárta at NetApp in 2012. In 2004, he won the Novices National Hill Climb and Individual Time Trial Championships, then took five victories in Junior races in 2007 before going to the Ista team the following season and taking second place in the Under-23 Tour of Berlin and the U-23 National ITT Championships as well as a very impressive fourth at the Chrono Champenois. Then, in 2009 when he rode for Pro Continental ELK Haus, he became National ITT Champion at Elite level; so for 2010 he went to Pro Tour Footon-Servetto and, having finished the Tour de Langkawi in eighth place, went to the Giro d'Italia where, for a rider in his first Grand Tour, he did remarkably well despite suffering badly in the mountains with 21st place on Stage 1 and 19th place on Stage 21, coming 90th in the General Classification. In 2011, he switched to Geox-TMC and won the Sprints classification, also competing at the Vuelta a Espana and managing a surprising 63rd place on Stage 15, which climbed the infamous Alto del Angliru. When Geox pulled out of cycling, he moved to NetApp and rode another Giro, once again performing well with eighth place on Stage 9 and seventh on Stage 16; like most sprinters, he was hurt once more in the mountains and ended in 111th place. Surprisingly, despite showing real potential as a Grand Tour stage-winner of the future, in 2013 Brändle moved back down to the Pro Continental level with the Swiss team IAM. However, the move seems to have suited him as he was fourth at the GP Cholet-Pays de Loire and won the Points classification at the Tour de Romandie, the National ITT Championship and the General Classification at the Tour de Jura


John Boyd Dunlop
On this day in 1888, John Boyd Dunlop obtained a patent for his invention, the pneumatic tyre. He had  qualified as a veterinary surgeon from the University of Edinburgh, then set up a surgery and practiced for ten years before relocating to Northern Ireland and setting up another surgery. Dunlop had a sick son who suffered great pain as a result of the vibrations transmitted through the metal tyres of his tricycle, so his father set out to find a way to reduce this - resulting in the pneumatic tyre. He quickly realised that his invention had a future and patented it. With help from the cyclist Willie Hume, who used the tyres to win a string of races, he soon found a market.

Then in 1891, it was discovered that a pneumatic tyre of very similar design had been patented in France by another Scottish inventor named Robert William Thompson more than forty years previously. A business deal also didn't work out which, combined with the subsequent declaration of invalidity on his patent, meant that Dunlop made very little money from "his" invention.

Jørgen Hansen, the Danish cyclist who represented his country in the 1968, 1972 and 1976 Olympics and was a part of the bronze medal-winning squad in the Team Time Trial event at the last, was born on this day in 1942.