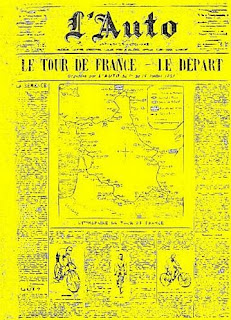 Lefèvre, the story goes, had not been expecting his editor to stoop so low as to ask him for an idea and he hadn't bothered to spend any time considering the issue; he said later that he had to think fast and blurted out the first thing that came into his mind. "Let's organise a race that lasts several days, longer than anything else. Like the six days on the track, but on the road." Desgrange pondered this for a moment or two.

The name and concept had been used before for automobile races, but it was the first time that it had been used in the sport with which it would forever be associated. By the end of the first Tour the following year, L'Auto's circulation had trebled. Five years later, figures hit 250,000 and by 1923 they'd reached half a million a day. Desgrange was not at first convinced that the Tour would be a success and stayed away for the first year but later, when it showed signs of becoming much bigger and more profitable than anyone ever imagined, he was happy to take full credit for it. Many authors, historians and fans alike tell us to never forget that it's a lowly 23-year-old reporter that we should really thank for what has become the greatest sporting event the world has ever seen, but this may not in fact be the case: L'Auto had organised an earlier race, Paris-Brest-Paris (a single-stage 1,200km event) in 1901 and had enjoyed a big upturn in sales as a result. It seems unlikely, therefore, that Lefévre was the only man to have thought of a bike race; it is far more likely that somebody else - possibly Desgrange - had already suggested a long-distance race as one option and the group was trying to think of a way in which their new event could be made different from all those that had come before. It may be the case, therefore, that despite over a century of claims that Lefévre was the true "Father of the Tour," it might in fact have been first thought up by Desgrange after all - or possibly even by somebody else altogether.

Once in a while, though, miracles happen too, and the story of Monique van der Vorst appeared to be a fine example of that. Born on this day in 1984, van der Vorst underwent surgery on her ankles during childhood, but something went wrong and, aged just 13, she was left in a wheelchair. She learned to ride a handcycle, a vehicle both steered and powered by the hands and arms. She became good at it, then in 2008 was involved in a road accident that left her paralyzed in boith legs. She continued handcycling, however, and became even better at it - so good, in fact, that she won two silver medals at the Paralympic Games in Beijing.

In March 2010, when she was 25, her handcycle was rammed by another cyclist who lost control while traveling at high speed. What could so easily have been another tragedy turned out to be something very different - as she recovered from the crash, van der Vorst began to feel a tingling sensation in her legs, the first sensation she'd had in them for 12 years. Slowly but surely, full feeling returned and with the help of a physiotherapist she was able to learn to walk - and, before too long, ride a conventional bike. In November 2011, Rabobank announced that it had signed van der Vorst up to its new Women's Team for the 2012 season, during which she would race alongside riders such as Sarah Düster, Annemiek Van Vleuten and the team's star rider Marianne Vos, widely acclaimed as the best cyclist in the world.

The contract lasted just seven months before Rabobank released a press statement in which it claimed the team's doctors had advised van der Vorst not to continue, which seemed to suggest she faced further ill health if she did; however Rabobank would provide no further information and, strangey, said it was up to the rider to reveal more if she chose to do so. Some sections of the media suspected another angle, perhaps relating to the earlier confusion about her disability and what she could and couldn't do whilst affected by it following claims by witnesses that she had been seen to stand up and walk after races, but as of yet none has emerged. Meanwhile, several news reports have suggested that, if it can be shown that she was able to walk at the time she won her medals at the Paralympics, she would have been incorrectly classified for the events in which she took part - in which case, she could be stripped of her medals.


Graeme John Miller, the New Zealand professional cyclist who retired at the age of 42 due to a back problem and then returned to competitive cycling six years later, winning the Sinclair Packwood Memorial Road Race in 2008, was born on this day in 1961. Earlier in his career, Miller won two gold medals in the 1990 Commonwealth games. Happy birthday, Graeme - here's to many more successful years!

Happy birthday to Northern Irish cyclist Michael Hutchinson, who set a new record for completing 30 miles in 55'39" in 2011 and has been 50 mile National Time Trial champion since 2000. With 51 time trial titles to his name, he comes second in greatness only to the legendary Beryl Burton who won 97.