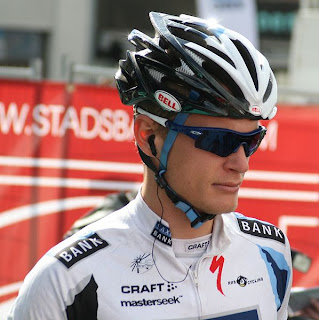 Matti Breschel
Born in Ballerup, Denmark on this day in 1984, Matti Breschel won the Junior National Road Race Championship in 2001, then did sufficiently well in junior and amateur road races over the following few years to draw the attention late in 2003 of PH, a Danish-based UCI category team that has made a habit of finding promising young riders and shaping them into future stars - Mads Christensen and Anders Lund were both riding for the same during the same period. In the year he spent with them, he won four races and came third in the Elite National Championships - PH had done its work, and Breschel moved onto CSC where he would remain until the end of 2010.

When the news of his transfer to CSC was first announced, Breschel was charmingly modest and insisted that he would spend the year learning how to race professionally and didn't expect to do well. In fact, he took second place on Stage 3  and second overall at the Tour of Qatar (crossing the line a respectful few centimetres after the winner, his friend and mentor Lars Michaelson) and was later third again at the Nationals. Two years later, at his first Giro d'Italia, he finished Stage 18 in third place; in 2008 he was second in the Nationals, won Stage 21 at the Vuelta a Espana and then came third at the World Championships.

In 2009, Breschel won the National Championship; in 2010 he was 11th at Milan-San Remo, eighth at Gent-Wevelgem, 15th at the Ronde van Vlaanderen and won the Dwars door Vlaanderen. Towards the end of the season he came second again at the Worlds before announcing that he would be switching to Rabobank for 2011. His first year with them passed without victory, but in 2012 he was third at Gent-Wevelgem and won Stage 3 at the Vuelta Ciclista a Burgos. At the end of the year, with Rabobank withdrawing funding from its men's team in the wake of Lance Armstrong's exposure as a drugs cheat, Breschel departed for Saxobank-Tinkoff; a season in which he achieved top ten stage finishes at the Giro d'Italia and Tour de Suisse and came fourth at the Danish National Road Race Championship and won two stages at the Post Danmark Rundt (where he finished third overall) looks promising - he is a rider with the potential to do very well over the next four or five years.

Laurent Fignon
Laurent Patrick Fignon was the polar opposite of the old "cyclists as poor boys with hungry eyes" stereoype - his background was decidedly middle class and he even went to university, studying material science at  Paris 13 in Villateneuse, though he dropped out soon after the course began and joined the army. Nevertheless, in a sport where the majority of athletes hadn't even passed their school exams, he was soon nicknamed "The Professor."

Fignon won the Tour de France in 1983, but probably wouldn't have done had Bernard Hinault not been kept away by a knee injury. He and Hinault couldn't have been more different - Hinault was a rough, tough son of the soil, a Breton Celt to his very core and a man who thought nothing of using his fists to end a disagreement; Fignon was from Paris, the sort of man who knew which knife and fork to use for every course in a fine restaurant and might have used philosophical points where Hinault used fists. The rivalry that formed between them when the Breton's glory days began to fade in 1984 was, therefore, a godsend for the newspapers - and it cuminated in Fignon winning the Tour by 10'22. Brains had soundly thrashed brawn.

In June 2009, when he was 49 years old, Fignon told reporters that he had been diagnosed with cancer two months earlier and was undergoing chemotherapy. The treatment was not successful; he died on the 31st of August the following year. There is more on him here. 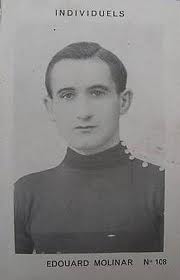 Edouardo Molinar, who was born in Rocca Canovese, Italy on this day in 1907, won Stage 13 and the overall King of the Mountains and was third in the General Classification at the Vuelta a Espana in 1935, then came third in the King of Mountains and tenth overall at the Giro d'Italia a year later.

Bill Strickland, born in Gary, Indiana on this day in 1964, is an author who has become famous primarily for his books on cycling. He has written factual guides, autobiographical pieces and biographies, among them Mountain Biking - the Ultimate Guide to the Ultimate Bike, Ten Points and Tour de Lance; but his most famous is his first book The Quotable Cyclist. Strickland  also competes in amateur road and cyclo cross events.