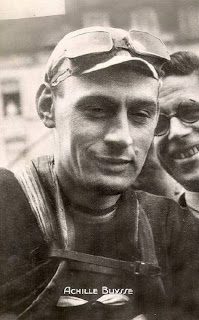 The Ronde van Vlaanderen was held on this day -one of only two in May (the other was the first edition in 1913) - in 1941 and was won for the second time by Achiel Buysse, the rider who, two years later, would become the first man to win three times. The Ronde, as we've noted previously, was the only Classic to continue on occupied home soil throughout the duration of the Second World War, Belgium having been overthrown by the Nazis the previous year. In 1941, a number of Nazi officers - presumably cycling fans themselves - became involved in the running of the race which would lead to problems following the Liberation when organisers were faced with accusations of collaboration.